A Proper SUV for an Adventure in Luxury and Performance 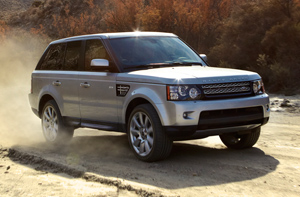 What do you get when you genetically splice a mountain goat and a gazelle? The answer is embodied in the new Range Rover Sport Supercharged.

For the few of you who may not know of the Range Rover’s legendary lineage, the one-time British marque, (now owned by the Indian company Tata Motors) through its Land Rover models, became world renown in the years following World War II for building rugged all-terrain vehicles that could, with super machine-like qualities, forge rivers, climb impossibly steep grades, slog through mud-laden swamps and traverse boulder-strewn tracks. Early Land Rovers were famously portrayed in National Geographic Magazine as the vehicle of adventurers because they were usually photographed in some remote setting with all manner of wild game nearby.

In short, Land Rovers were proper SUVs long before there was such a thing. And long before we crossbred the gazelle and the mountain goat to create the modern-day luxury SUVs.

But that was yesterday. What is Land Rover doing for us today?

As it turns out, plenty: Land Rover’s rich heritage has found its way into a new breed of SUVs that are simultaneously capable of the same off-road feats of their ancestors, while offering a most civilized on-road driving experience.

Take for example, the 500+ horsepower Ranger Rover Sport Supercharged, the subject of this month’s road test. Outside, the car has a clean no-nonsense design that clearly communicates both the functionality and the formality of the vehicle. On the inside, driver and passengers will find themselves ensconced in an upscale bovine environment: more leather than a herd of long-horned steers.

The Range Rover Supercharged has power, agility, comfort, luxury, rugged durability, functionality, style and the panache of Robert Redford in “Out of Africa.” All of this bundled in with all the latest electronic technology; GPS moving maps to get you across the Serengeti, Bluetooth to wirelessly connect to your world phone, central climate control to ward off the desert heat, and in-vehicle diagnostics, all accessible from seats personally road tested by his Royal Highness Prince Philip. Why even the air in the tires is electric.

But there is more. Did you say you wanted video cameras that look forward to assist you in navigating the wilderness of a Vons parking lot? The Range Rover has them.

How about a computer controlled all-wheel drive system that provides touch-of-the-finger settings for almost every conceivable off-road condition, including jumping the curb on that tight corner at the Starbucks’ drivethru? The Range Rover has that too.

Take it off-road and the Range Rover Sport Supercharged is guaranteed to amaze. Locking differentials make quick work of sharp inclines, up or down, which are scaled with effortless ease, especially when you employ the standard traction control for long downhill runs. Turn it across the incline so that the you are traveling at a most uncomfortable angle, fearing you will roll sideways down the hill like a loose boulder, the Range Rover never loses its footing.

Accomplished Off-Road and On

If the Range Rover Sport is brilliant off-road, it is most accomplished on more civilized tracks. The ride is pleasantly firm providing surprising handling for an SUV that weighs 5700 pounds. Road noise is muted as the driver sits high, feeling quite royal on the multi-adjustable seats the aforementioned cows have sacrificed themselves to cover.

All manner of controls fall readily to hand as the instrument panel features a center mounted multifunction display for controlling everything, including more video cameras than the White House briefing room.

The six-speed transmission is silky-smooth and yet responds instantly to manual shift commands with a quick touch of the shift lever.

At the business end of the Range Rover is the massive 5-liter 510-horsepower supercharged engine that turns out 461-pound-feet of torque to provide seamless acceleration in virtually any driving situation. The Range Rover Sport Supercharged accelerates from 0-60 miles per hour in under 6 seconds, outrunning even the gazelle.

Of course all of this comes at a price. In this case you can have your own Range Rover Sport Supercharged starting at about $75,000.

In one sense that is a bargain; you almost get two vehicles for the price of one, the mountain goat and the gazelle, the off-road warrior and the club car for an evening about town.

And another thing about the Range Rover Sport Supercharged, you won’t see them everywhere. Land Rover doesn’t make many so you have the distinction of driving a vehicle that is functional, decorative and unique.

For discerning drivers who prize power, prestige, ponies and polished leather, who want to take their adventures in luxury, the Range Rover Sport Supercharged is perfect. For the rest of us, we will just have to see if we can round up a few hundred horses and cows.

Reo Carr is editor-in-chief of the San Diego Business Journal.