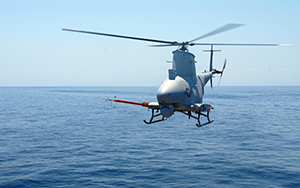 San Diego is becoming a force to be reckoned with in the field of robotics and remotely operated vehicles.

McConnell made the observation during a program organized in August by CommNexus, a local technology group, which took stock of San Diego’s place in the robotics world. There is a lot going on. In addition to its unmanned aircraft builders, the region houses businesses specializing in software to control walking and flying robots, a business that builds robotic “farmhands” and a business specializing in remotely operated swimming machines.

Robots are here to stay, said McConnell, director of engineering with 3D Robotics Inc., a Berkeley based firm which has substantial operations in Otay Mesa and Tijuana.

“This is really the birth of a huge new industry,” said the San Diego-based executive. “This isn’t going to be a flash in the pan. These things aren’t going away. You’re going to see robots becoming more and more capable. [There will be] lots of things happening in the future.

“I really want us to be leading that space here in the San Diego and Tijuana area. The possibilities for innovation and growth are just huge.”

Eugene Izhikevich added to those thoughts later in the evening.

“I want to turn San Diego into a robotics hub,” the chairman and CEO of San Diego-based Brain Corp. told a dinner gathering.

With funding help from Qualcomm Inc., Brain Corp. is writing software that will allow robots to learn behavior in the same way that an animal responds to training. The process sidesteps million-dollar efforts to write code for a robot, said Izhikevich, a computational neuroscientist.

San Diego has several attributes that can make it a robotics hub, Izhikevich said.

They include the talent of University of California, San Diego, whose faculty excels in robot-related disciplines such as computer vision, computational neuroscience and cognitive neuroscience. UC San Diego Chancellor Pradeep Khosla, now beginning his third year at the university, is a robotics expert. Khosla came to San Diego after a long stay at Carnegie Mellon University in Pittsburgh. Izhikevich credits Khosla with making Pittsburgh a robotics hub.

Secondly, San Diego has Qualcomm, whose executives are interested in robotics and whose mobile- device technologies are well suited for it. These include Snapdragon processors, which offer high performance with low power consumption, he said.

San Diego’s “secret weapon,” Izhikevich said, is the potential to manufacture robots on the other side of the international border in Tijuana. There would be no need to manufacture in China, with its time difference and the chance that intellectual property might be pilfered. Executives could cross the border to take care of business at a factory and be home in time for dinner, rather than taking a two-month trip to China, the executive said.

The robotics field could easily be in the same place that the personal-computer business was during the 1980s, Izhikevich said. That was the time when Michael Dell worked out of his dorm room and when hundreds of small companies served the market. Just as in the PC business, there could be decades of consolidation ahead.

Izhikevich’s business, Brain Corp., does not disclose revenue and currently has 30 full-time employees, plus a number of consultants with doctoral degrees. The business, whose product is the Brain OS, expects to grow to 60 full-time employees within the next six to 12 months, Izhikevich said. Among its new hires will be software engineers.

The business is housed under Qualcomm’s roof but plans to move into its own quarters shortly.

Other prominent robotics and remotely operated vehicle companies currently at work in San Diego are:

• Northrop Grumman Corp., which produces military aircraft able to operate autonomously — that is, without a human in the loop. Northrop Grumman (NYSE: NOC) writes software for the aircraft in Rancho Bernardo and manages its unmanned aircraft programs there.

• General Atomics Aeronautical Systems Inc., located nearby in Poway, which produces remotely piloted military aircraft such as the Reaper and its predecessor, the Predator.

• Point Loma-based SeaBotix Inc., which produces small vehicles that can swim or crawl underwater, operating at the end of long tethers. Among other tasks, they can make video inspections of surfaces far beneath the water, or manipulate remote objects with a claw.

• Vision Robotics of Sorrento Valley, which makes complex robots that do farm work. One machine prunes grapevines, using stereo vision to determine the position of the branches, while another thins lettuce seedlings. Vision Robotics has also pursued the concept of a mechanized orange picker.

• 3D Robotics, which makes small drones resembling helicopters and fixed-wing aircraft, as well as the software to run them. The business is going after commercial markets. McConnell told his audience that flying robots could inexpensively inspect pipelines, high-voltage lines or the nation’s bridge infrastructure.

• 5D Robotics Inc. of Carlsbad, which has been working out software for U.S. Army robots.

The creation of an industry cluster in a community often involves the presence of an important customer, said Mary Walshok, dean of UC San Diego Extension and associate vice chancellor of public programs at the university.

Navy work led to the formation of a company called Linkabit, which eventually spawned a number of wireless and technology companies including Qualcomm, she said.

The development of drones and robots — which also have military roots — seem to be following a very parallel path, Walshok said.

Brain Corp.’s Izhikevich said he is sure the robotics cluster will grow in San Diego.

“All the stars align here,” he said.