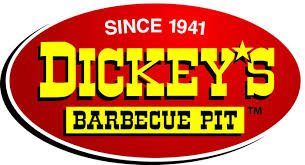 The local eatery is operated by franchisee Todd Morely, a 14-year veteran of the retail and grocery industries, company officials said.

Dickey’s has nearly 400 locations in 42 states, and was recently named by the industry consulting firm Technomic Inc. among the nation’s fastest-growing restaurant chains.

The company was started in 1941 by Travis Dickey and has been franchising since 1994, according to its website. The fast-casual restaurant’s menu includes meats that are slow-smoked on-site, along with home-style side items.