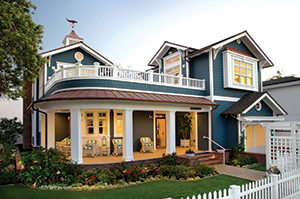 Magazine selected a house at 100 Ocean Drive for its 2014 Showhouse. The home will debut in its October issue. It is the first California home for the magazine’s annual recognition and is a well-deserved pick. Selected from possibilities on all the coastlines in the U.S., the home in Coronado is truly one of the most beautiful homes in the nation.

In January of 2013, a fifth generation contractor/builder in Carlsbad selected Coronado-based John O’Brien and partner, Mark Blore, of Flagg Coastal Homes to build a multigenerational property on the Coronado Beach.

O’Brien founded Flagg Coastal Homes as a design/build custom homebuilder in response to the demand for nautically inspired homes in Coronado. O’Brien, a U.S. Naval Academy graduate, former Naval Officer, PT-Boat skipper, has been building and selling homes for 34 years in Southern California. O’Brien’s partner, Blore, joined Flagg Coastal Homes in 2004 and is a Navy SEAL as well as a Coronado resident. During the past 13 years, Flagg Coastal has developed and sold 37 homes in Coronado.

“We have a look,” O’Brien said. “A coastal look and branding.”

All proceeds from the ticket sales for the showcase go to the Navy SEALs Foundation. To date the showcase has generated $33,000 for the foundation.

The home is three stories, and it is entered from the street on what is technically the second floor. The entry was designed in a wide gallery style so you can see all the way through to the ocean and the Coronado Islands.

“We reversed the floor plan, all the main bedrooms are on the same floor as the entrance except for the kid’s space in the basement,” O’Brien said.

The construction of a basement in Southern California is rare, and this was not without its problems. When construction began they punctured the old bottom of the sea. The home is located on an old bight, a shallow stretch of water that used to divide Coronado and North Island. The bight was filled in during WWII. The construction team pumped seven million gallons of water out of the basement. Interestingly, it was fresh water from an aquifer.

The entryway to the basement is off the gallery floor, down a wide set of painted stairs and unlike most basements, it’s filled with light. The Flagg team installed windows on the east side so that light fills the room for most of the day. Off of the living area is a creative set of four bunkbeds for the grandkids. The bunks are built into the wall and are reminiscent of berths on a boat.

Going back up to the entry-level second floor is the master bedroom with ocean breezes and views and French doors leading to a deck. Two more bedrooms are on the other side of the gallery with a shared bath.

The piece d’ resistance is the upper floor where the kitchen and family room are located. The house is set back from Ocean Drive on a large grassy park, which provides a buffer from the traffic and beachgoers. The farm-style kitchen sink looks out over the park to the ocean.

Finally, a reason to do the dishes.

A huge deck stretches across the entire front of this floor. When the French doors are open it is one large living area filled with comfortable furniture and dining tables.

The landscaping was provided by San Diego-based Topia, whose founder designed and installed the landscaping for the Ritz-Carlton Hotel in Laguna Beach, according to O’Brien.

On the back side of the kitchen is the “adult relaxation room” as O’Brien referred to it. The floor is clad with distressed French oak planking from San Diego-based DuChateau Floors. O’Brien said it is “hottest flooring in America” right now.

Off of the adult relaxation room is yet another deck, which leads to the rooftop deck, which overlooks the one of the best views on the planet.

“Point Loma, Pacific Beach and La Jolla are usually clouded in,” he said. But Coronado is in the sun all the time, because of the way it is situated.”

We ended up in the garage on the basement level where O’Brien had a large map of the U.S. so visitors can push in a pin in to indicate where they were from.

“We have more visitors east of the Mississippi than from the West,” he said. “We’ve had visitors from Canada, England, New Zealand, Germany and Switzerland as well.”

It’s worth a visit, especially to benefit a good cause. Go to coastbuilder.net