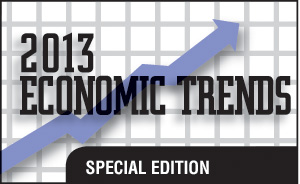 As 2012 wound down, two more San Diego banks announced they would join forces, capping off a year when acquisitions and mergers reduced the number of locally based banks from 19 to 16.

While the sluggish economy and increased regulations affected all banks, smaller banks felt the pressure more because they simply don’t have the same resources as larger banks.

“The biggest banks are extremely competitive these days,” said Rick Levenson, president of Western Financial Corp., a San Diego investment firm that specializes in community banks. “The larger you are, the more efficient you can be, which gives you the ability to better price things (primarily via lower interest rates on loans)…It’s very expensive to do business as a small community bank.”

Mercardante said in recent years the big banks have become more aggressive about taking clients from the smaller banks. While clients of small lenders enjoy the generally higher service levels, big banks will always beat the smaller ones on loan pricing, he said.

“A Wells Fargo, BofA, or U.S. Bank can offer their customers a 3 percent rate and 10 years (term) on a commercial loan, but a small community bank could never do that,” Mercardante said.

Then, there’s the ongoing slew of new regulations associated with the Dodd-Frank financial industry reform law.

Alan Lane, chief executive at Silvergate Bank in University City, said in the past 18 months, his bank had to double its regulatory compliance staff, adding two people. Next year it needs to add another person for the compliance function.

“Adding up all the new systems that are required, additional new software for tracking and monitoring, and all the people, it could cost a bank several hundred thousand dollars a year, and there’s no discrimination because of your size,” Lane said.

Growing in size is imperative, said Mercardante. “Banks that are in the range of $150 million to $250 million (in assets) will not be able to survive long term…or provide any returns to their shareholders, so the only real answer is to create better economies of scale,” he said.

Another tried and true strategy for making it through the economic doldrums is diversifying a bank’s business lending strategy and products. Lane noted his bank launched several new lines of business in recent years, including a mortgage warehouse lending division, helping it to grow to above $600 million.

“When I came on at Silvergate about four years ago we were around $300 million in assets,” he said. “But if we didn’t grow to above $500 million, we wouldn’t be reporting the kinds of earnings we are today.”

Bankers insist they’re actively trying to extend credit to businesses, but finding qualified borrowers isn’t easy these days because so many business owners are reluctant to expand or hire with all the uncertainty that has prevailed for much of the last few years.

Larry Hartwig, former CEO at California Community Bank and now a merger transition adviser for Regents Bank, which acquired CCB last year, said business customers at his bank were using an average of 38 percent of their lines of credit, well below the draw down pre-recession. “They’re not using their credit facilities,” he said. “It’s not robust in any industry save some parts of technology.”

The asset number that many bankers now say is necessary to grow to before generating consistent profits and returns was $500 million, but even banks that size are intent on getting bigger, some said.

Despite the ongoing shrinkage in the number of smaller banks and the government sanctioned survival of the very largest banks (those in the “too big to fail” category) most bankers agreed community banks won’t go extinct.

“There are many big banks that try to bank small businesses and do a good job in certain specialized areas, but they don’t have a small business mentality,” Lane said. “There may be fewer small banks but there will still be a need for them.”