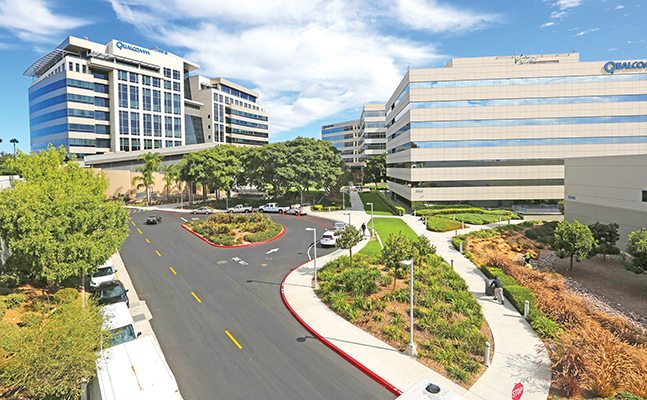 Jan. 29: The Federal Trade Commission’s antitrust case against Qualcomm concludes. District Judge Lucy Koh had not made a ruling as of April 10.

March 26: The U.S. International Trade Commission rules one of Qualcomm’s patents is invalid. Qualcomm had sought to secure a ban on iPhones that infringed one of its patents.

March 26: In a separate case before the ITC, an administrative law judge ruled that Apple had violated one of Qualcomm’s patents, and recommended an import ban on infringing iPhones. Nothing would take effect until the full commission rules on the case.

April 15: Apple’s five-week breach of contract and antitrust trial against Qualcomm is expected to start in San Diego.

Qualcomm Inc. and Apple Inc. will face each other in court again, in another important legal skirmish putting billions of dollars and Qualcomm’s licensing business at stake. Apple’s antitrust trial against the San Diego-based chipmaker is expected to begin April 15, in Qualcomm’s backyard at the U.S. District Court for the Southern District of California. The case could determine how much Qualcomm is able to charge phone-makers to license its vast library of patents.

“There has been a lot of focus on (the case as) two kids in the sandbox continuing to battle. But there are a lot of implications, not just for Apple and Qualcomm, but across the entire tech space,” said Daniel Ives, a managing director and equity analyst for Wedbush Securities. “It would have implications across the whole semiconductor food chain. It would also set a precedent from a licensing perspective.”

At the heart of the case is a 2013 business agreement between Apple and Qualcomm, giving Apple a rebate on Qualcomm’s licensing fees in exchange for exclusively using Qualcomm’s modems in its devices, and for Apple not prompting certain lawsuits or investigations against the chipmaker. That agreement dissolved in 2016, when Apple began incorporating Intel’s modems into the iPhone 7 and later models.

Apple sued Qualcomm two years ago for breach of contract, saying it owed Apple unpaid rebates. Qualcomm, for its part, accused Apple of breaking their business agreement by making “false and misleading” statements to the Korean Fair Trade Commission.

On March 14, District Judge Gonzalo Curiel ruled that Qualcomm owes Apple nearly $1 billion in unpaid rebates. But that isn’t nearly the full scope of what Apple is seeking in this case.

“It would be a major feather in the cap for (Apple CEO Tim) Cook and Cupertino (where Apple is headquartered) if they get a victory here,” Ives said. “Especially since they’ve been slugging it out here for a year plus.”

If the final court decision affects how Qualcomm can collect royalties, it would be a big blow to the San Diego-based chipmaker.

Robert Stoll, an intellectual property attorney and partner with Philadelphia, Pennsylvania-based Drinker Biddle & Reath LLP, said for that to happen, the court would have to determine the patents in question are for technologies deemed essential to wireless standards, and that Qualcomm had been charging too much for those licenses.

“It will affect how Qualcomm licenses with other companies, and its relationships with other companies, if its patents are deemed invalid, Qualcomm is deemed to use excessive force, or if they are determined to be standards-essential patents,” Stoll said. “These are all things that have not been evaluated with these particular patents yet.”

Apple doesn’t directly license Qualcomm’s patents, unlike other phone-makers. Instead, Apple’s contract manufacturers pay the licensing fees, which are levied as a percentage of the cost of the end product.

Royalties are a substantial part of Qualcomm’s bottom line. For some context, last year licensing fees accounted for 23 percent of the company’s revenue, at $5.16 billion. Just two years prior, before Apple and Qualcomm began fighting in court, Qualcomm brought in $7.66 billion in licensing.

Testimony in the case could also lead more of Qualcomm’s corporate partners to question its licensing practices. Since Apple’s manufacturers stopped paying to license Qualcomm’s technology at the end of 2016, Qualcomm contends it is owed more than $7 billion in unpaid royalties. The chipmaker is also negotiating a final licensing agreement with Chinese phone-maker Huawei, though the two companies struck an interim deal in January.

“… we continue to view the legal stakes as remaining high for Qualcomm given the significance of the ongoing litigation,” Ross Seymore, a research analyst with Deutsche Bank, wrote in a March 26 note. “Additionally, we view public testimony and public exhibits presented in these trials as opening the possibility for additional disputes or negotiations from Qualcomm’s customers as licensing and pricing information comes to light.”

No End in Sight

The San Diego court battle likely won’t be the last case between Apple and Qualcomm, which have already held skirmishes in courts in Germany and China, and with the U.S. International Trade Commission.

So far, the rulings have come in like a game of tug-of-war, with each side gaining incremental victories, but nothing substantial enough to end the prolonged litigation. Qualcomm won a patent case against Apple last month, netting it $31 million in damages, but then lost a similar case when the ITC determined one of its patents was invalid.

“There are probably patents in the works that Qualcomm is going to assert against Apple,” Stoll said. “I don’t think this is anywhere near the end.”

In the long-term, he said, continuing to brawl goes against both companies’ best interests, even though a settlement is still nowhere in sight.

“They need to come with clean hands and work this stuff out because it’s really causing problems,” Stoll said. “It’s getting them a bad reputation in the public. … Neither benefits from the demise of the other.”

One thing is for certain: both companies have a lot at stake.

While Qualcomm’s licensing business is on the line, Apple risks having a court ban the import of iPhones found to infringe Qualcomm’s patents. And in the long-run, the extensive fight with what was formerly its main modem supplier could have an effect on when Apple is able to bring 5G phones to market. While Apple had sought to release its first 5G devices in 2020, a recent report by UBS analyst Timothy Arcuri said it could take longer, though it’s unclear how much a delay would affect Apple’s business.

“They’re even risking the race to 5G because of this,” said Ives, the equity analyst for Wedbush Securities. “It’s high-stakes for them. They’re emphatic about this and not looking to settle.”