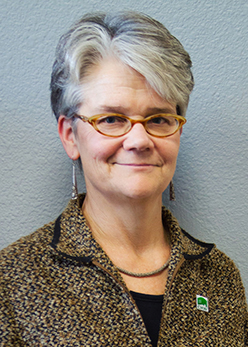 Sue Reynolds, president and CEO of Community HousingWorks, describes herself as a passionate social entreprenuer fiercely focused on CHWs long-term impact of sustainability, financial health and changing families’ futures. Reynolds has been with CHW since 1997, and during that time she has been a tireless advocate and builder of affordable multifamily housing. Last week, President Barack Obama spoke at a renewable energy center in California and cited CHW as a key player in achieving the administration’s solar energy goal of providing 100 megawatts for publicly supported housing by 2020.

Reynolds took some time to share her thoughts on environmental issues as well as a little bit about herself.

How did CHW’s solar projects come to the attention of President Obama?

CHW has been a nationally recognized sustainability leader in apartment construction for years — winning the coveted Urban Land Institute Award of Excellence in the Americas for Poway’s SOLARA and the 2013 U.S. Green Building Council national award for transit-oriented Kalos Apartments in North Park. Local sustainability entrepreneur Everyday Energy in Carlsbad has financed many of our solar improvements to existing apartments, and helped shine the spotlight on CHW.

Why did you decide to provide 3.5 megawatts of on-site solar in 22 of CHWs affordable rental communities?

It’s said that the threat of a hanging will wonderfully concentrate the mind. It was actually the threat of rising energy expenses that helped concentrate our minds on conservation investments. Reducing the bite of mounting utility bills on our apartment residents’ limited incomes also meets CHW’s mission of moving people up in the world. We started to carefully leverage our construction dollars at our 30 apartment communities with [San Diego Gas & Electric] and water district conservation programs, private investor capital, NeighborWorks America funding, and government tax credits and rebates.

What is your educational background?

I have bachelor’s degree from Ohio State University and a master’s in urban planning from Columbia University.

What was your career path to your current position?
A little bit of everything and a lot self-taught. A minister got me involved in a poor neighborhood as a teen, and I discovered my life’s passion — helping people dig themselves out of poverty. I spent the 1980s in New York City as an urban policy researcher and an affordable apartment activist. In the 1990s in San Diego, I put together tens of millions of dollars in financing for nonprofit affordable apartment complexes. When I was hired as CEO of CHW in 1997, there were 13 staffers. In 2013, CHW’s 90 staff members created more than $124 million in investments in apartments and single-family homeowners in San Diego and helped some 8,000 people move up in the world through a stable home.

What are the most challenging issues facing sustainability efforts in San Diego?

Water use is one of the most difficult sustainability issues. It’s expensive to change out landscaping, a huge water gobbler, and there are few government or market investment incentives. And as a region, we are still struggling to bring together our emerging transit and walkability and “bikeability” improvements with a new vision for San Diego.

Where were you born?

I was born in the rust belt town of Youngstown, Ohio.

Who gave you your first break?

Helen Dunlap — my nonprofit consulting boss, who later became head of the U.S. Department of Housing and Urban Development — just assumed that I had it in me to do almost anything in affordable rental housing finance.

What is your biggest stressor or the thing that causes you the most angst?

The failure of our San Diego and California government leaders to successfully confront the challenging land-use and funding decisions, which could make our homes and apartments more affordable and more sustainable for the long term.

How do you relax?

I walk and hike — locally and afar, most recently inn-to-inn in Provence. Cooking is my meditation. And I attend as much local theater as I can.

What was the most recent book you read? Did you read it as an e-book or a printed book?

I just finished “Sixty Million Frenchmen Can’t Be Wrong” by Jean-Benoit in print, and the e-book “Mastering the Rockefeller Habits” by Verne Harnish with fabulous business advice for growing organizations.

What is your definition of a good day?

When my passion can inspire others to drive for the best in themselves, or to invest in CHW’s homes and programs that transform families’ lives, that’s a good day.

East Village Growth Stronger Than Ever