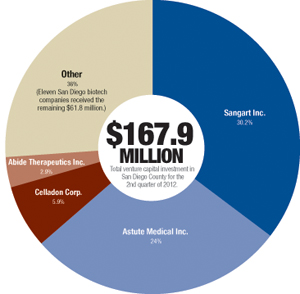 Two companies emerged with the majority of venture capital investments among the $167.9 million invested in San Diego’s biotech sector in the second quarter of 2012. Sangart Inc. raised $50.7 million, or 30.2 percent of the total, and Astute Medical Inc. brought in $40.4 million, or 24.1 percent.

A variety of 11 biotech companies attracted the remaining investments ranging from several million dollars for BioSurplus Inc. to $16.5 million for Obalon Therapeutics Inc., according to a MoneyTree report from PricewaterhouseCoopers and the National Venture Capital Association.

Global biopharmaceutical Sangart of Mira Mesa is in late stage development with two clinical programs, MP4CO in Phase 1 studies as a treatment for sickle cell anemia, and MP4OX in Phase 2 studies as a treatment for trauma. Both are being studied in Europe as well as South America, South Africa, the Middle East and Southeast Asia. Sangart President and CEO Brian O’Callaghan said both programs are expected to come to a conclusion by the end of this year, with data for both studies appearing early next year.

During May, the company with nearly 100 employees announced it secured $50 million in equity funding from existing investor Leucadia National Corp. of New York City. This funding was made upon the exercise of Series G preferred stock warrants previously held by Leucadia and brought the total funding raised by the company since inception to more than $280 million, according to Sangart.

The funding followed a favorable review by an independent data monitoring committee, a drug safety monitoring board consisting of clinical experts based at various institutions around the country. The committee reviewed safety data from the first 122 patients enrolled in the Phase 2b trauma study involving MP40X and cleared the study to proceed.

“They’ve twice looked at the data and twice told us it’s OK to proceed to the end of the study,” O’Callaghan said.

With roughly $50 million from Leucadia and the remaining from other investors, Sangart, founded in 1998, is preparing to finish the MP4 clinical programs and preparing for Phase 3 for trauma and Phase 2 for the sickle cell anemia trials.

“We continue to see promise in our unique MP4 gas-delivery platform, focused on developing therapies for patients in crisis who are experiencing ischemia (oxygen deprivation of tissues) and organ dysfunction as a result of hemorrhagic shock injury or a vaso-occlusive crisis associated with sickle cell disease,” O’Callaghan said, in a statement.

Founded in 2007 by two former members of the management team at Biosite Inc., Chris Hibberd and Paul McPherson, Astute is a diagnostics company that is focusing on the study and validation of biomarkers that can be commercialized as novel tests to serve unmet diagnostic needs. Essentially, the company says it studies new and known biomarkers — individually and in combination — seeking to discover utilities that can be applied to diagnosis or risk assessment. Areas of applications include kidney injury, sepsis, abdominal pain and acute coronary syndrome.

Astute Medical is currently preparing to commercialize its first test in Europe. Not yet approved for sale in the U.S., the test is intended to aid in the risk assessment of kidney injury in critically ill patients.

The company intends to use the proceeds of its investment to begin commercializing its first product, as well as to advance and expand its research, development and validation of biomarker-based laboratory tests.

“Astute Medical has made rapid progress in its development of biomarker-based diagnostics to address major unmet medical needs,” said Jim Scopa, managing director of MPM Capital. “We are excited to fund the commercialization of Astute’s first product as well as the continued development of the pipeline.”

Another leader in the quest for VC funding is Celladon Corp., a Del Mar biotech founded in 2004. Celladon’s Head of Corporate Development Fredrik Wiklund said the company altogether raised $53 million in two tranches, with $43 million announced in February and an additional $10 million in the same round announced in May.

“It’s all considered the same tranche, it’s just that two investors came in at a later date under the same terms,” Wiklund said. “The proceeds will go toward the clinical trial and toward the manufacturing of our product.”

The key driver for the company is Mydicar, which is in a Phase 2b clinical trial and targets a key enzyme deficiency in advanced heart failure.

Heart Failure Cases on the Rise

More than 670,000 new cases of heart failure will be diagnosed in 2010 and that number increases yearly, according to Celladon, which states that the economic burden of heart failure in the U.S. in 2010 was estimated at $39.2 billion.

Current investors in Celladon, which employs a dozen full-time staff in addition to several contractors, include Pfizer Venture Investors, Novartis Venture Funds and Johnson & Johnson Development Corp. Wiklund said the investors were attracted to the company’s earlier stage clinical data. Also, without a lot of therapies available for heart failure, there is a very large unmet need in these patient populations, he said.

“The data that we had in the earlier Phase 2 trial was very encouraging and we hope we can provide these patients with a new therapeutic option to treat their disease,” said Wiklund, adding that patients often turn to a left ventricular assist device or face heart surgery when they exhaust the pharmaceutical products on the market.

Wiklund said Mydicar shows potential for gaining FDA approval based on the trial currently being undertaken but with long lead times, the norm in the pharma business, approval is not likely until 2017 to 2019.

Abide Therapeutics Inc. in Torrey Pines is making progress with $6.6 million invested in the company from Cardinal Partners of New Jersey and friends and family since Abide was founded in 2011.

Alan Ezekowitz, CEO, president and co-founder of Abide, said the science driving the investment is based on technology developed at Scripps Research Institute by Professors Ben Cravatt and Dale Boger which focuses on unlocking the potential of an inhibiting enzyme called serine hydrolases. About 125 of these enzymes in the human genome play an important role in thought processes, food digestion and blood clotting, Ezekowitz said. Scripps investigators developed a chemical library of compounds which targets this group of enzymes. The chemicals, when bound to the enzymes, have the ability to knock out their function.

One application is creating an alternative to medical marijuana for treating pain, Ezekowitz said.

“If you inhibit these enzymes they cause the natural chemicals in the brain to increase and so you would anticipate having positive effects on pain and sleep without the psychotropic effect you have with marijuana,” he said. “This has been shown with animal models.”

Other applications include treating metabolic diseases such as diabetes and heart disease as well as inflammation and inhibiting bacteria which are resistant to current antibiotics.

“The business strategy is to have six pillars that represent disease indications that this product engine can support,” Ezekowitz said.

Ezekowitz said investors have been attracted to the company in part because of the broad applications of the technology and this optimism has been supported by the research alliances Abide has made with companies such as Cubist, which is delving into using Abide’s chemical libraries to make new antibiotics, as well as a partnership with Scynexis to determine whether it can make antiviral and antiparasitic compounds, and with Novartis in seeking the development of novel anti-inflammatory drugs. He additionally credits Cardinal Partners’ interest in Abide, which has seven employees locally and 10 chemists in China, to the company’s good relationship with Scripps Research Institute.

“They’re extremely capable and professional in the way they transfer technology from the Institute to startup biotech companies,” he said. “Their scientists maintain active involvement in Abide, which is another important variable that encouraged Cardinal Partners to invest in the company.”

Opening the Books on Diversity Progress in Accounting