Founder’s Death Is the End of an Era for Cubic 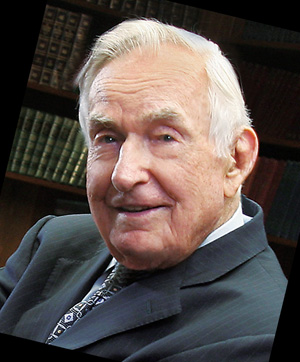 Walter J. Zable, the founder of Cubic Corp. who died June 23 of natural causes at the age of 97, is gone but his company lives on.

Given Zable’s age, Cubic’s board of directors had temporary and long range succession plans in place, and are implementing them, said Bob Sullivan, a Cubic director and the dean of the Rady School of Management at UC San Diego.

“The succession will be as smooth as silk,” Sullivan said. “The plan has been in place for some time, and it’s been refined for some time.”

Cubic spokesman Tim Hill said the board launched a search for Zable’s replacement earlier this year that narrowed to three or four possible candidates. Cubic may have a replacement chief executive named within two months, Hill said, although Sullivan said there’s no urgency to quickly select a new CEO.

“There’s no need to rush into this because the company … won’t change,” he said. “Each of the divisions is being run successfully by a president and each of these presidents has extraordinary leadership and management skills.”

While Zable was working regularly up to the time he died, he was also clearly slowing down. Near the end, he was getting around with the help of a wheelchair.

“He had to do that because he had bad knees,” said Sullivan, who saw him at his 97th birthday at his Rancho Santa Fe home on June 17.

According to Forbes, Zable had been the oldest chief executive of a public company. In a July 2011 story, Forbes ranked Melvin Gordon of Tootsie Roll Industries second at 91, and O. Bruton Smith of Speedway Motorsports Inc. as third oldest at 84. Both men are a year older today.

“What would I do?” Zable responded in an interview done by the San Diego Business Journal in 2009 upon his reaching 90. “If I retired I’d be at home, reading technical books and wouldn’t be in the real world.”

From his wood paneled, corner office in Kearny Mesa, Zable kept his hand in a host of different projects, and continued to make key decisions, according to several sources.

Despite his slowing, Zable was still “sharp as a tack,” and regularly kept abreast of the company’s operations with subordinates, Hill said. “He talked with his division presidents regularly and he loved to dive into details of projects,” Sullivan said.

Zable grew up in Boston, and graduated from the College of William and Mary after earning a full scholarship for football. He was good enough to entertain a brief career playing professionally in the late 1930s for the Richmond Arrows and New York Giants.

In 1949, the engineer moved his family to Riverside to set up an electronics division before working a stint at General Dynamics’ Convair division.

In 1951, he launched Cubic with about $5,000 and $20 worth of electronic testing equipment. Cubic was a diversified business that got involved in many lines including precision distance measuring equipment and aerial photo mapping and surveying. It created the first scoreboard for what was then called San Diego Stadium (now Qualcomm Stadium), and a satellite surveying system that produced a precision measurement of the nation that was a forerunner of global positioning systems technology.

In the early 1970s, Cubic developed air combat training systems of the kind immortalized in the movie “Top Gun.” It parlayed that expertise to a growing defense systems division that sells its services to the United States’ military departments as well as to 35 allied nations.

The company also operates two other divisions, transportation, providing automated fare collection systems to mass transit agencies; and mission support services. In total, Cubic has about 7,800 employees, including some 1,200 in San Diego at two main sites in Kearny Mesa.

Zable’s endurance likely had something to do with the company’s own staying power. Few companies, particularly those in the high-tech industry, are still around today from the 1980s or 1970s, never mind the 1950s. Except for General Atomics, founded in 1955, the area’s larger defense contractors are gone (GD Convair and Titan), have been acquired, or in the case of SAIC, have moved their headquarters to the East Coast.

In recent years, Cubic’s revenue and profits have consistently grown. Revenue increased from $890 million in 2007 to $1.28 billion last year. Its operating income has risen from $62 million to $112 million over that same time.

“It’s been a solid performer,” said analyst Jim Ricchiuti of Needham & Co. “Their defense business has done very well with a strong profitability, and the transportation business, with its new contracts, has also done well. … The company is very well run and well-positioned despite all the concerns about the economy and defense spending in general.”