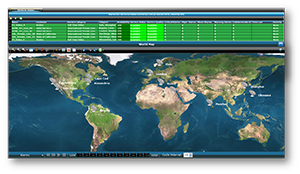 Qualcomm Inc. has taken the wraps off of chips for extra-fast Wi-Fi radio communication. The San Diego business plans to go to market with an end-to-end solution, offering chips for both network infrastructure and client devices. Samples ought to be available in the first half of 2017, the company said.

In other Qualcomm news, the corporation extended its tender offer to acquire shares of NXP Semiconductors N.V. The new deadline for shareholders to tender their shares is March 7. The business wants to wrap up the acquisition by the end of 2017.

The sales force at Kratos Defense & Security Solutions Inc. has found business in an out-of-the-way spot: the Mediterranean island of Cyprus. The island’s telecommunications authority has selected Kratos’ end-to-end network management suite to help with satellite ground operations. Financial details of the transaction were not disclosed.

Kratos’ satcom network operations business is providing its Compass product to monitor device health, and its NeuralStar SQM product to manage services across the international network. The network management suite will go into the Makarios Teleport, where Kratos’ Monics radio frequency monitoring system is already connected to more than 60 satellite antennas. Benefits of the new end-to-end system include the automation of manual tasks.

Kratos (Nasdaq: KTOS) also provides electronics to U.S. and allied militaries, and it is putting effort into a drone business. It employs 2,800 people in all of its business units.

The products, which use artificial intelligence, have come on the market with the names Webroot FlowScape Analytics, Webroot BrightCloud Streaming Malware Detection and Webroot SecureAnywhere DNS Protection. Webroot has released beta versions of the latter two products and expects general availability in the spring.

Ostendo In the Spotlight

Ostendo Technologies Inc. of Carlsbad said it has created an LED light that can go from red to green to blue, and is electrically tunable to all points in between (so amber and yellow are possible). CEO Hussein El-Ghoroury is one of three authors who wrote up the feat in an electronics trade magazine.LED stands for light emitting diode.

Ostendo reportedly has technology that is even more jaw-dropping: a chip that can project 3-D holograms. The company is keeping that one close to the vest, however. The business told federal regulators in October that it had raised $41.8 million in funding.