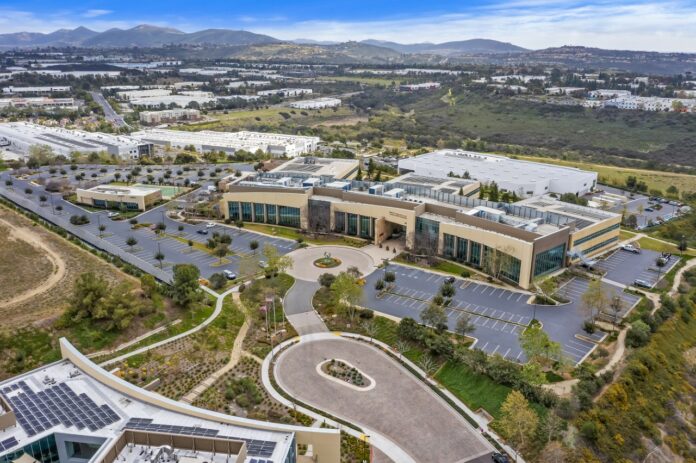 Ionis Pharmaceuticals has sold its 246,000-square-foot Carlsbad campus for $258.4 million with an agreement to lease the property back from its new owner, Oxford Properties Group, which is based in Toronto.

Under the agreement, Ionis will leaseback its 18-acre existing campus at 2855 and 2859 Gazelle Court for 15 years.

Ionis also agreed to lease a 165,000-square-foot building which Oxford plans to build on an eight-acre site across Whiptail Loop, with construction slated to start in early 2023 and finish in early 2025.

The transactions were arranged by CBRE.

“The long-term leaseback with Oxford allows Ionis the ability to expand their facilities while providing capital that can be invested into their robust pipeline,” said Matt Carlson, executive vice president of CBRE.

Elizabeth Hougen, CFO and executive vice president of Ionis, said that the company “has long maintained a strong financial position to support our business objectives.”

“While we have a healthy cash balance, we also have near-term capital needs to scale our organization to deliver on our growth initiatives,” Hougen said. “This transaction will provide us with significant cash proceeds while allowing us to conduct our day-today operations as we normally do.”

The existing Ionis campus in Carlsbad was developed in 2011 and includes space for offices, labs, research and development, and a conference center.

Ionis also is expanding its operations into Oceanside, leasing an Oceanside warehouse that Sudberry Properties is planning to build for the company.

Working with Matt Carlson from CBRE in arranging the sale and leaseback with Oxford Properties Group were Hunter Rowe, Todd Tydlaska, and Roger Carlson in San Diego and Anthony Hayes and Jared Pimm of CBRE’s consulting team in Boston.

Rowe said that the Ionis-Oxford deal stands out in San Diego’s life science market.
“There are very few largescale opportunities in today’s environment for capital to invest in the life science sector, particularly ones anchored by an established tenant with a robust late-stage pipeline,” Rowe said.