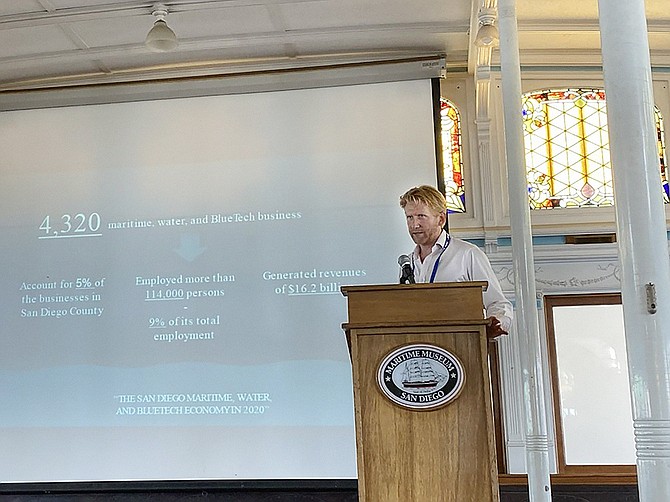 Matt Classen presents the findings of the “The San Diego Maritime, Water and Bluetech Economy in 2020” report aboard the Maritime Museum’s steam ferry Berkeley. Photo by Jeff Clemetson


Even amongst strong and diverse sectors like biotech, pharma and tourism, San Diego’s blue economy is a pillar of prosperity in the region, and one that is growing quickly.

That is the finding of a report by TMA BlueTech released May 6 at a special presentation held aboard the Maritime Museum’s steam ferry Berkeley.

The report, titled “The San Diego Maritime, Water and Bluetech Economy in 2020” is a follow up to a similar report by TMA BlueTech in 2012 that looked at the local maritime and bluetech industry from an economic impact perspective. The 2020 report was a much broader look at the impact of the blue sector and measured its expansion over the last eight years.

“The world has woken up and there is a recognition of the importance, the size, the growth of the ocean economy and San Diego’s got an amazing opportunity in the future,” said TMA BlueTech founder and former director Michael Jones who was the first to speak at the presentation before turning it over to current executive director Matt Classen.

Classen’s presentation touched on the highlights of the region’s blue economy.

According to the report, in 2020 San Diego County was home to 4,320 maritime, water and bluetech businesses – 5% of total businesses in the region. The blue sector employed over 114,000 people – 9% of the total workforce. Revenue generated from those businesses totaled $16.2 billion.

And those numbers could be much lower than they are today.

“This study was taken in 2020, so there were some adverse effects on the results because of COVID, but between 2012 and 2020 the maritime, water and bluetech industry groups’ revenue grew by 18%,” Classen said, adding that nearly two-thirds of businesses in the blue economy reported depressed revenue.  “But if we look at the increase of total jobs from 2012 to 2020, it’s a 163% increase, which is significant, even during a COVID year.”

Absent COVID, the research in the report suggests revenue increases would have probably been closer to the 163% growth observed in employment.

The report also showed that local businesses generated much of their revenue from the region.

“So that’s keeping that economy in the confines of San Diego. It’s not being sent overseas,” Classen said.

“For every dollar put into the San Diego bluetech sector, we get $2.26 out of it. For San Diego County that ripples out to $2.34 and for the state of California, it’s $2.68. So we’re showing a very positive net benefit. For every dollar that goes in, we get these kinds of results out of it,” Classen said. “These are real numbers, if you invest in these economies, this is what you’re gonna get out – and we have such a high concentration of these companies already.”
Classen concluded his presentation of the report’s highlights with TMA’s “greater vision” for San Diego’s blue economy.

“The vision of TMA Bluetech is to look at the economy in this region as the Silicon Valley of bluetech,” he said. “We can do that here based on the resources we have. All the assets are here, the will, the enthusiasm is here to make that happen.”

(To view an online copy of “The San Diego Maritime, Water and Bluetech Economy in 2020,” visit tinyurl.com/2p8apn4j.)

After Classen’s presentation, local officials spoke to the positive findings in the report and pledged more support for the blue economy industries.

“Every community in the county will feel this wide-ranging bill, including the blue economy,” Peters said.

Peters also said the Biden Administration has requested $6 billion in the budget for NOAA conservation projects; $300 million to construct, repair aging facilities fishery labs; and another $600 million for the Department of Transportation Maritime Administration for projects to support supply chain infrastructure.

“We need to make sure San Diego gets its fair share of the money – not just based on our size, which is about 1% of the country, but based the amount of innovation and exciting opportunities that we can help create here with that germination,” Peters said. “I think we can show the same kind of multiplier effect in research as we are showing in jobs.”

Mayor Todd Gloria said he plans on proposing an update to the city’s economic development strategy, with the blue economy in mind and called the report’s data “extremely helpful.”

“Bluetech has always kind of been here because if the Navy was here early on, you understand bluetech has been going on for a while,” he said. “My point is when you put some data next to it that really helps drive investment drive change make it part of a larger regional strategy.”

San Diego County Board of Supervisors Chair Nathan Fletcher said regional government needs to recognize that the maritime and bluetech is an “independent, stand-alone part of the San Diego economy” just like biotech, pharma or tourism.

“We now have to talk about this because we have the data, we see the numbers,” he said.

Fletcher added that San Diego has an obvious advantage in growing this sector that other regions don’t – proximity to the ocean.

“Normally when we talk about economic development, we’re competing against states that have better tax climates and other things. Here, we have the advantage. Now we need to seize it,” he said.

Board of Port Commissioners chairman Dan Malcolm pointed out the Port of San Diego’s unique role in the blue economy.

“As a collective group on port tidelands we’re responsible for about $9.6 billion of annual economic benefit to the region,” he said, adding that the port provides 44,000 maritime jobs with an average of  $72,000 per year. “That beats the county average of $45,000 significantly. Those are jobs that are worth protecting and they’re part of our blue economy here in San Diego.”