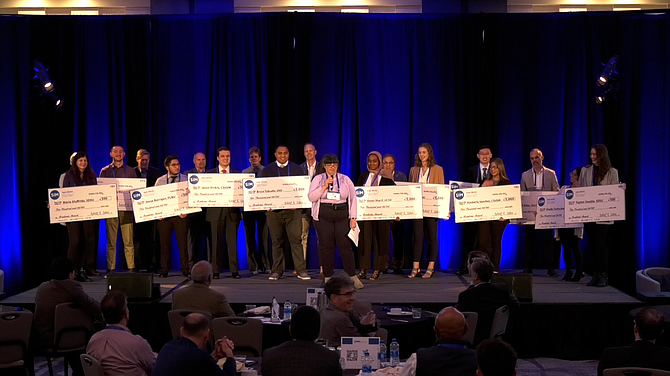 SIM San Diego has reached a significant milestone in its support of students studying technology.

The organization has given away $200,000 worth of scholarships with its most recent round of awards.

Scholarship awards were worth as much as $5,000.

Scholarship funds come from dues paid by SIM members as well as sponsorships from technology vendors.

Students received their scholarship checks at the SIM San Diego/HMG Strategy Technology Executive Leadership Summit in late October at the Hyatt Regency La Jolla at Aventine. Students were able to attend the all-day event and hear tech leaders discuss how they are responding to real-world challenges and opportunities. The theme of the summit was “Courageous Leadership and Fearless Reinvention: Focusing a Fresh Lens on the Future of the Organization.”

During the event, SIM members walk students around the conference and introduce them to tech industry leaders in attendance.

“We want to get them internships and ultimately jobs,” said Barb Munro, the local chapter’s member chair and one of its founders. “The objective is to build relationships now and get them jobs in San Diego.”

Students tend to think they have to leave San Diego to find employment. “There are opportunities right in our backyard,” Munro said.

SIM consists of senior executives in the IT space, and includes members from the region’s biggest and most prominent companies. Steve Phillpot of Solidigm is president of SIM San Diego. The chapter was founded in 2010 by Munro of The Carrera Agency and Yasmin Shah of Seenager Inc., who is the chapter’s marketing chair. The San Diego chapter has 180 members.

SIM offers networking opportunities at the local and national levels, access to research, and leadership training and development programs.

A golf event at the Del Mar Country Club is planned for later in the month.

The organization is embarking on its third year of its Women in Technology group, whose membership numbers about 40. Members are mid- to senior level women, aspiring career professionals nominated by SIM members. A few have transitioned to membership in SIM, Munro said.

“We’re trying to make this a tight IT community in San Diego,” Munro said.