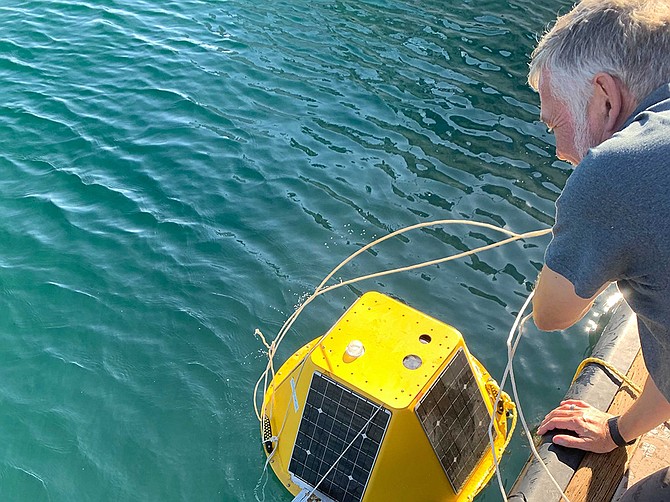 Graeme Rae, CEO of HyperKelp, is in his element while tending to a buoy that carries sensors. The small business is pursuing work with defense giant Northrop Grumman Corp. on projects of common interest. Photo courtesy of HyperKelp.


An Encinitas-based startup that recently participated in the Techstars Space Accelerator is now getting an assist from a defense technology giant.

HyperKelp works with computer-equipped smart buoy systems. Such buoys can be likened to “a pickup truck for the ocean,” able to haul a variety of oceanographic sensors, said Costas Soler, HyperKelp’s chief technology officer.

It is pursuing its technology as governments around the world, including North Korea, develop hypersonic weapons — and militaries work to better defend against them. 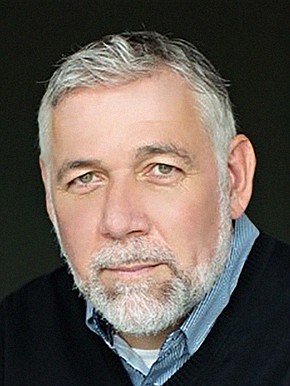 HyperKelp’s hosted payload solution can provide an early alert for the presence of hypersonic weapons. That helped the company get in the door at Techstars.
More recently, HyperKelp has teamed up with Northrop Grumman Corp. (NYSE: NOC).

Initially, the duo is focused on a different concern: climate change. The partners are developing a system that will let scientists in Greenland measure subsea water temperature and water quality to gauge how quickly glaciers are melting.

Scientists are already able to use satellite-mounted sensors to monitor the rate that ice melts above the water. However, they can’t easily survey what is happening beneath the surface. HyperKelp’s technology promises a solution to that puzzle.

Data collected in the joint project can be fed into climate models, said Graeme Rae, CEO of HyperKelp. Rae holds a doctorate in ocean engineering and artificial intelligence from Florida Atlantic University.

Getting to Know You

Long works with early stage startups. His job, he said, is to “figure out how to incorporate their technology into solutions that we provide to our customers.” With the exercise involving melting glaciers, the $35.7 billion corporation learns about the partner company and its employees, and the way they work.

It also gets to vet its technology.

As part of their joint project, HyperKelp and Northrop Grumman plan to deploy Conductivity, Temperature and Depth (CTD) sensors in the Arctic this summer to measure the makeup of seawater. Seawater containing glacier meltwater has a unique chemistry; its conductivity and temperature differ from that of normal seawater. The CTD sensors use HyperKelp’s Kelp Smart Buoy as a hosted payload platform.

The time frame for the project has been “incredibly fast,” said HyperKelp’s Rae. “We started talking in October and we had a prototype, a proof of concept in the water before Christmas. … Developing completely novel oceanographic sensors in the space of a few months is pretty impressive.”

HyperKelp’s buoy is an example of “edge computing.”

“Each individual system is itself a processor,” Rae said. “They have a fairly powerful single-board onboard computer that can do a lot of processing actually on the edge. So things like generating … profiles for classifying and categorizing airborne threats is done on the edge and the results are sent back — not the raw signals.”

HyperKelp and Northrop Grumman may pursue other pilot projects as they measure glacial meltwater in the Arctic.

“I think what we’re doing here is going to be important to a basic understanding of our world,” Northrop Grumman’s Long said. “It’s an exciting project to be part of.”