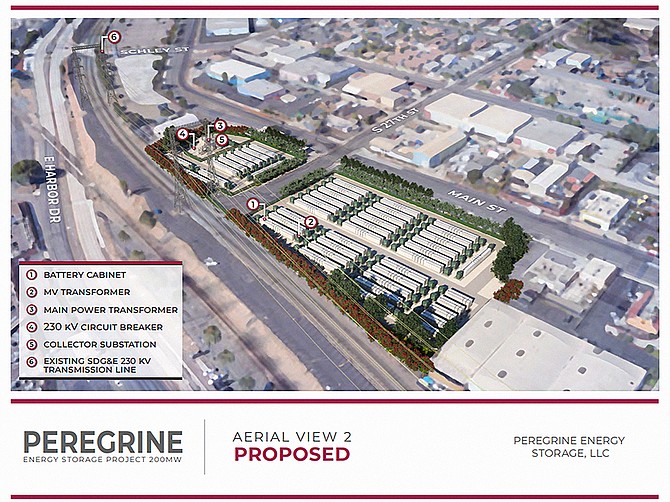 Rendering courtesy of Tenaska A 200 megawatt battery storage power plant would store energy during the day and release it during peak evening hours.


One of the largest independent energy companies in the United States is building a $200 million battery power plant in Barrio Logan.

Tenaska, based in Omaha, Nebraska, is building the 200-megawatt Peregrine project in collaboration with Arevon, a renewable energy company based in Scottsdale, Ariz.

The Barrio Logan installation will be Tenaska’s first battery storage project in California and the first permitted in San Diego.

The company plans to break ground in early 2022 on the project at 27th Street and Main Street at the former IMS Recycling Center.

The plant is expected to go online about a year after construction starts. 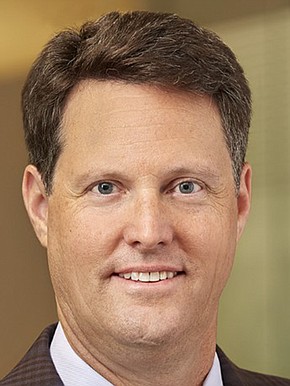 “Three years ago, we started developing this project. We have another eight like this in other parts of the state,” said Tim Hemig, senior vice president in Tenaska’s Strategic Development & Acquisitions Group.
Holy Grail

The Barrio Logan plant will use a series of Tesla Megapack lithium ion batteries similar to those used in Tesla vehicles.

The batteries will be stored in about 30 long cabinets laid end-to-end and side-by side. The cabinets will be installed behind landscaping and fencing.

“This type of state-of-the-art technology solves some of California’s greatest energy challenges,” Hemig said. “We just saw the need for power that could be provided in late afternoon and evening. That’s what the issue is with the power grid right now, there’s not enough power supply during the evenings.”

Peregrine and battery-fueled power plants like it would help solve the problem by pulling energy from the grid during the day when demand is lower, storing it, then feeding it back into the grid during hours of peak demand, Hemig said.

“It’s kind of the holy grail of power. If you can store it, you can turn the power grid into a much more efficient way to deliver power,” Hemig said.  “We buy energy from the market to charge the batteries, then discharge it back to the market. In its simplest form, it’s kind of an energy arbitrage opportunity to buy low and sell high.”

The battery storage plant was named Peregrine after the falcon, considered the fastest creature on the planet, capable of reaching speeds of more than 200 miles per hour as it dives for prey.

The battery-powered energy plant will be equally fast in responding to quick demands for energy, Hemig said, adding that it would help eliminate brownouts when power demand exceeds the capacity of the grid.

Unlike conventional power plants, “One of the good things about it is battery energy storage doesn’t need a lot of space,” Hemig said.

The Barrio Logan project will cover less than four acres and will provide enough power for about 200,000 homes for two hours.

“When we look for a project location, we want a location where there’s community support and there’s an industrial area where we could build our project,” Hemig said.

Connecting to the Grid

The Barrio Logan site was ideal because it’s in an industrial area and near an SDGE substation where the battery storage plant can connect to the power grid.

“This location was very conducive to what we wanted to do,” Hemig said.

It also had the support of Mayor Todd Gloria. “We hope to see more energy projects like this one throughout the region in alignment with our Climate Action Plan and Climate Resilient SD goals,” Gloria said in a statement.

In a touch of irony, the site also was once a 250-megawatt power plant that was razed in the 1980’s.

“It ran on fuel oil, which is about as dirty a fuel as there is,” Hemig said.

Tenaska has developed, managed and/or operated about 22 gigawatts of power plants fueled with natural gas and renewable sources, according to the company, which has been ranked among the 50 largest private companies in the U.S.