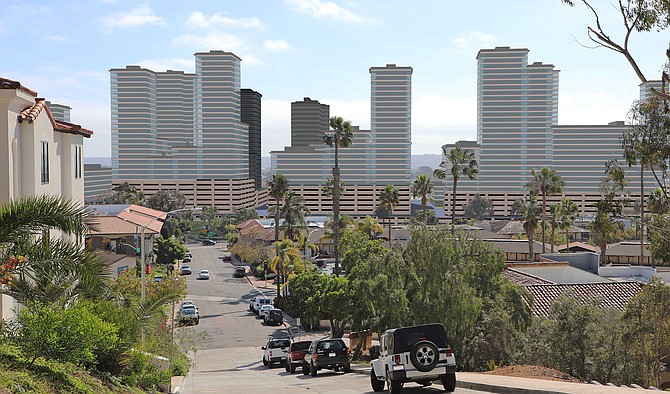 A computer simulation shows how the Navy's preferred plan for redevelopment of the NAVWAR site could create a new San Diego skyline. Rendering courtesy of U.S. Navy. 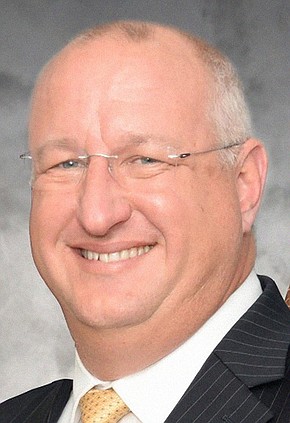 About 5,000 people work at NAVWAR.
In proposing to redevelop the NAVWAR campus in partnership with private companies, the Navy is drawing on the model it used for construction of its new 17-story headquarters on Pacific Highway.
Completed late last year, the $212 million project was built and paid for by Manchester Financial Group as part of a development agreement covering the area.
Greg Geisen, NAVWAR’s project manager, said the NAVWAR project “makes good business sense.”
“Revitalization takes what is federal property, spread out on the first floor of 70 acres, and gives the opportunity to monetize the value of most of that 70 acres to provide the Navy with new, secure, modern facilities on a much smaller footprint,” Geisen said. “At the same time, it allows the people of San Diego to consider allowing housing and a transit-oriented development on what is currently federal land.”

Views
The Navy’s preferred plan would dramatically change views from several locations, including Point Loma.
Building heights under the preferred plan could reach 350 feet. The buildings would be shorter in the other alternatives.
Although the project hasn’t reached the stage of having formal designs of any structures, the Navy has prepared computer simulations that portray a series of office and residential towers to give some perspective on what effect the project could have on various view sheds.
The computer simulations are included in the draft environmental impact statement and available online.
Virtual public meetings on the draft environmental impact statement are scheduled for June 8 and June 23 at NAVWAR-revitalization.com.
The goal is to have a final environmental impact statement by the end of the year, with a decision on which of the five proposals to go with in early 2022.
Copies of the draft EIS are available online and at the Mission Hills-Hillcrest/Knox Library, 215 W. Washington St., the Point Loma/Hervey Library, 3701 Voltaire St., and at the San Diego Central Library, 330 Park Blvd.