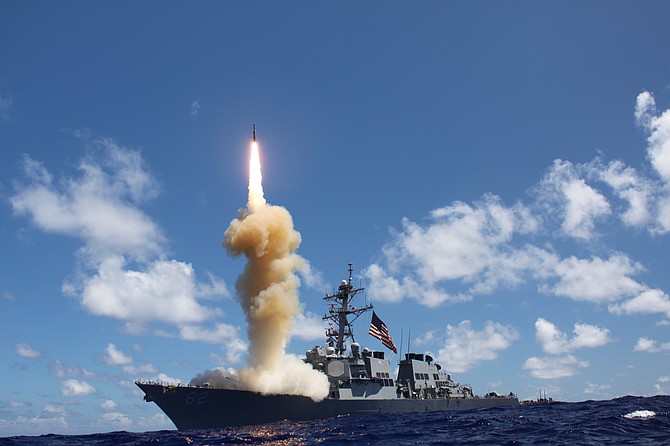 The guided missile destroyer USS Fitzgerald launches a Standard Missile-3 during a joint ballistic missile defense exercise in the Pacific Ocean during 2012. The U.S. Navy has awarded BAE Systems a contract for design work and support services for the vertical launch system, used by ships that carry missiles. Photo courtesy of U.S. Navy.

The U.S. Navy awarded BAE Systems a contract for work as the design agent for the mechanical portion of the Mk 41 vertical launch system. The Navy uses the system to launch a variety of missiles from ships including destroyers and cruisers. Navies of U.S. allies also use the modular, canister-like vertical launch system, called a VLS for short.
If the Navy exercises all of its options, the deal will be worth as much as $164.5 million over five years. Primary work under the contract will be completed in Minneapolis. Some 18% of the work — with a maximum value of $29 million — will be performed in San Diego. Another 18% will be conducted in the Navy port of Norfolk, Virginia.
The contract calls for BAE Systems to provide design, development, test, product improvement and sustaining support for current and legacy VLS systems. BAE Systems will also continue to design and support canisters used to store, transport and launch the missiles from the VLS.
The Mk 41 VLS is capable of launching a broad range of missiles, including the Standard Missile SM-2, SM-3, and SM-6 variants; the Tomahawk Land Attack Cruise Missile; the NATO Seasparrow and Evolved Seasparrow; and the Vertical Launch Anti-Submarine Rocket.
The Mk 41 VLS is also deployed with the navies of Australia, Canada, Germany, Japan, the Netherlands, New Zealand, Norway, South Korea, Spain and Turkey. Some 11% of this particular contract will go to Japan.
The Naval Sea Systems Command at the Washington Navy Yard awarded the contract, announced on April 28.

GD Gets More Littoral Combat Ship Work
The U.S. Navy awarded General Dynamics Mission Systems Inc. (NYSE: GD) of Pittsfield, Massachusetts a $13.1 million contract for in-service engineering and lifecycle support services for the Independence-class Littoral Combat Ship. Work covers the ship’s integrated combat management system and its interfaces; command, control, communications, computers, combat systems and intelligence elements; software applications; and networking environment hardware program services. The deal includes options which, if exercised, would bring the cumulative value of the contract to $79.2 million. Approximately two-thirds of the work will be performed locally, with 40% in San Diego and 25% in National City. The balance of work will be performed in Massachusetts; Fairfax, Virginia; and Singapore. Work on the initial contract is expected to last through May 2022. If all options are exercised, work will continue through May 2026. The Navy did not seek competitive bids on the contract since it determined that there was only one responsible bidder and no other supplies or services would satisfy its requirements. The Naval Surface Warfare Center Port Hueneme Division awarded the contract, announced on May 24.

Deck Deal May Be Worth $63M
The U.S. Navy awarded South Bay Sand Blasting and Tank Cleaning Inc. a contract that could be worth up to $11.1 million. Under the indefinite delivery, indefinite quantity deal, the small business from National City will furnish management, administrative and production services, materials, tools, equipment and required support to accomplish removal of old deck covering and underlayment (including rubber base if present), abrasive blast, ultra-high pressure water jet, and power tool clean decks; prepare surfaces, apply primer coatings, and install new non-skid deck covering on Navy or other military vessels. If all options are exercised the contract could be worth as much as $62.8 million. The requirement was competitively procured as a small business set-aside solicited through the beta.sam.gov website, with three previous offers confirmed and one new offer received. The Mid-Atlantic Regional Maintenance Center in Norfolk, Virginia awarded the contract, announced on May 21.

Charter Vessel Work for Omni2Max
The U.S. Navy awarded Omni2Max Inc. of La Mesa an $8.7 million contract for the long-term charter of one U.S.-flagged, Jones Act-compliant offshore supply vessel, MV Ocean Valor, that will provide support for logistics experimentation focused on fuel, stores, passengers and ordnance delivery processes aboard small commercial platforms. This contract includes a 12-month base period with three 12-month option periods and one 11-month option period, which if exercised, would bring the value of the deal to $41.5 million. Work will be performed worldwide and is expected to be completed if all options are exercised, by May 15, 2026. This contract was competitively procured with proposals solicited via the Federal Business Opportunities website and three offers were received. The Military Sealift Command of Norfolk, Virginia awarded the contract, announced on May 17.