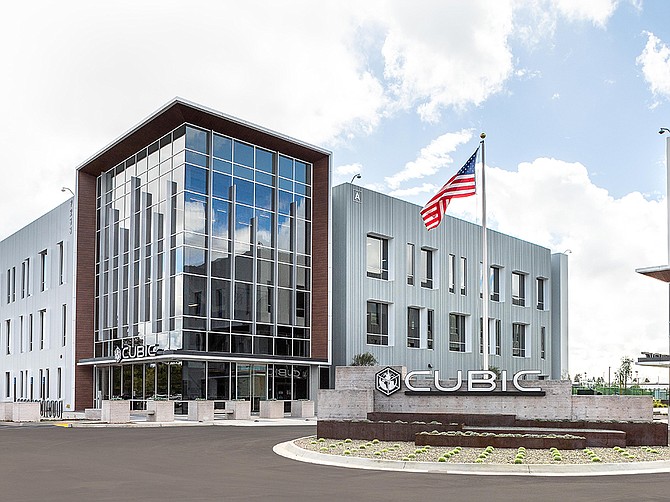 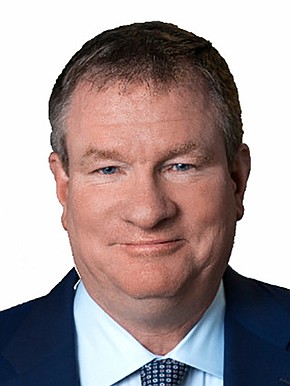 “We are excited that most of our San Diego Cubes will be located on one campus, further enhancing our One Cubic culture which focuses on teamwork and collaboration,” said Bradley Feldmann, chairman, president and CEO of Cubic.
The new project involved construction of two three-story buildings totaling 250,000 square feet that includes lab and office space.
Combined with two existing buildings, the headquarters totals 415,000 square feet.
Cubic is in the process of being acquired by Veritas Capital of New York and Evergreen Coast Capital Corp. of Menlo Park for $3 billion. Cubic’s board in March announced that it had rejected a rival bid from Singapore Technologies Engineering, Inc.
Veritas/Evergreen has said it will keep Cubic in San Diego.
Cubic, which reported $1.48 billion in revenue during 2020, divides its business between defense contracting and technology for government transportation agencies.

True to its Past
When it started looking for new corporate headquarters, Feldmann said Cubic considered moving its headquarters elsewhere but decided on the Kearny Mesa site to remain true to its roots as a San Diego-born company. 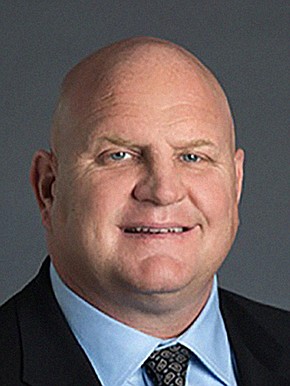 “We remain proudly headquartered in San Diego and are investing in our employees and the community with our new, modern headquarters that will continue to nurture our culture of innovation,” Feldmann said.
Cubic has about 6,000 employees worldwide, more than 1,500 of whom can be accommodated at the new headquarters, Feldmann said.

The Pandemic
The project came in early and under budget, said Jason Wood, a principal of Cisterra Development.
Whiting-Turner was the general contractor.
“The big challenge was building right in the middle of the pandemic,” Wood said.
At one point, the company that made the elevators for the building in Mexico shut down, Wood said.
“We had people test positive that were working on the job site. We had to quarantine people and areas,” Wood said. “Despite all that, we were able to deliver the project ahead of schedule and under budget. Whiting-Turner did a great job of helping with some of their key subs (subcontractors) and being able to get acceleration of trades to pick up time.” 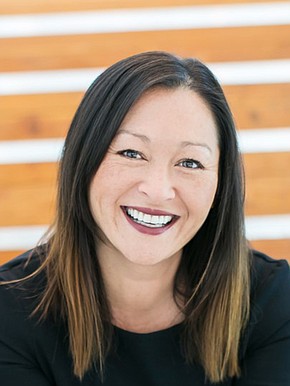 Company functions in the new buildings include human resources, legal, finance, engineering, information technology, business development, contract, marketing, and communications, Feldmann said.
The new buildings were designed in a way that illustrates the company’s philosophy and its cube-shaped logo, said Tiffany English, principal of Ware Malcomb in San Diego.
“Obviously, Cubic being the company that they are and being around as long as they have, we wanted to make sure we were respecting their history and the values they bring to their shareholders while creating a modern and efficient workplace,” English said .“A lot of their culture is built on cross pollination and innovation. We were really trying to embrace what we know about their culture.”
Ware Malcomb started working with Cubic in 2014 to develop a master plan for the company’s headquarters, English aid.
To make room for the new buildings, a 60,000 square-foot office building that had been on the site since the 1950’s was razed.

Atypical Construction
The site’s proximity to Montgomery-Gibbs Executive Airport posed some challenges on configuring the site, English said.
“We had to really think outside the box,” English said. “We had to be very careful to make sure we put those amenity spaces where people were gathering that aligned with the airport overlays.”
Overlays are zoning classifications that defined what can go where on a site.
The buildings are of tilt-up concrete construction, which is unusual for office buildings.
Typically, headquarter office buildings are glass and steel construction and tilt-up construction is more commonly seen in industrial buildings.
“Cubic is a great example of a Class A office approach in a construction type that is underrated. It’s going to be more cost effective, it always is,” English said. “It not only was a cost effective solution but we also felt it was an opportunity to show what you could do with this type of construction.”
The result is a far cry from the common, bland, boxy image that this type of building might bring to mind.
The lobby of one building has soaring, three-story glass walls that reach the ceiling with an interior staircase that’s visible from outside. Both buildings have large windows of varying sizes along the exterior walls, bringing natural light inside.
The interior of the new buildings are a hybrid of open office and collaborative areas, English said.
“There’s a lot of interior glass. All of the private offices have glass fronts,” English said. “We even structured it so that there are more spontaneous gathering spaces that people pass through before they get to their work areas. It creates opportunities for team members to cross pollinate.”
Wood of Cisterra said that other than the executive offices, most of the offices are in the interior with big open areas along the glass line to provide natural light to work areas.
“They (Cubic) pride themselves on being a very employee centric company. There is a lot of natural light,” Wood said.
English said that “some of the architectural elements we felt really aligned with the Cubic brand of simplicity.”
As a material, concrete indicates something solid, something that’s been around a long time as Cubic has been in San Diego, English said.
Using it in an innovative way also gave the buildings a physical connection to Cubic’s philosophy as a modern and evolving company, English said.