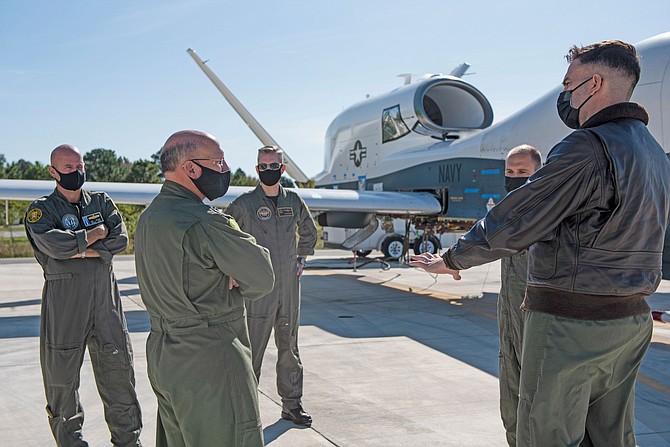 The Triton is a version of Northrop Grumman’s Global Hawk with modifications for work over the ocean, including special sensors. The unmanned aircraft, which carries no weapons, collects intelligence, flying above 50,000 feet. It is large for an unmanned aircraft, with a wingspan of 131 feet. The aircraft can fly missions longer than 24 hours and has a range of 9,400 miles (or 8,200 nautical miles). The Triton program is based at Northrop Grumman’s Rancho Bernardo campus.

Work under the contract will be performed in Patuxent River, Maryland (36.5%); San Diego (22.5%); unspecified locations outside the continental U.S. (12.7%); unspecified locations within the continental U.S. (8.8%); Jacksonville, Florida (7.7%); Mayport, Florida (6.5%); and Baltimore, Maryland (5.3%), and is expected to be completed in March 2022. The contract was not competitively procured because the Navy determined the services are available from only one responsible source. The Naval Air Systems Command at Patuxent River, Maryland awarded the contract, announced on March 15.

Citadel Defense of San Diego announced on March 18 that it received multiple counter drone delivery contracts from Five Eyes (FVEY) customers. Five Eyes is the intelligence-sharing alliance among Australia, Canada, New Zealand, the United Kingdom and the United States. The contract was in the seven-figure range; further terms of the deal were not disclosed.

Citadel’s Titan counter unmanned aircraft system (CUAS) will be rapidly fielded in response to immediate operational needs. According to Citadel, the Titan was selected based on positive reports from over a dozen realistic threat evaluations and three years of operational success in high stakes military and federal agency missions.

Titan delivers autonomous protection against an estimated 98% of commercially available drone threats (including toy and hobbyist drones) with superior performance in urban environments. Low support, training and sustainment costs deliver a force multiplying benefit to militaries and governments during a time when resources and budgets are constrained.

Allied forces have become familiar with Titan technology during joint missions with U.S. forces. With legacy technologies struggling to address the evolving threat, allied forces have selected Titan’s capabilities based on operator trust and effectiveness in hundreds of different missions. The multi-domain mission flexibility offered by Titan equips expeditionary forces with necessary protection that has previously been unaddressed.

“Many customers have missions where larger, highly integrated CUAS systems cannot be used. When Titan is not integrated with other sensors, it delivers cost-effective force protection as a standalone system that increases safety of servicemen and servicewomen in high-risk environments,” Williams said.

The company has been delivering systems under the contract throughout March.

Rancho Bernardo-based Genasys Inc. (NASDAQ: GNSS) announced on March 11 that its Canadian subsidiary, Genasys Communications Canada, received a contract from the Canadian government to test the company’s Contact Tracking software for government of Canada COVID-19 cases and vaccinations. Financial terms of the deal were not disclosed.

“This project was awarded based on a competitive process in which more than 500 proposals were reviewed,” said Richard Danforth, CEO of Genasys. “In addition to COVID and vaccination tracking, the project includes two-way alerts and responses over email, SMS, callouts, VoIP, pop-ups and mobile applications. Integrations with land mobile radio, gunshot detection, panic buttons and government agency alerting are also incorporated. Following strict privacy protocols, all COVID and vaccination tracking data is anonymized to safeguard the private information of those affected by the virus.”