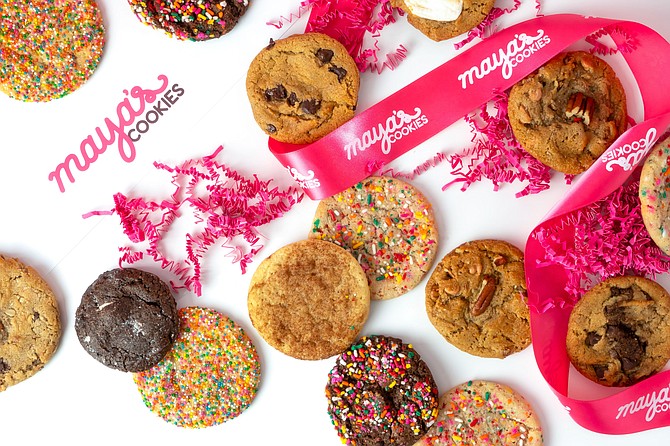 Maya's Cookies LLC was founded in 2015 and offers 12 flavors as part of its main menu. During the holiday season, it sells up to 20 additional combinations, including gingerbread.

Late last year, Maya’s Cookies LLC won a PETA 2020 Libby award for its chocolate chip s’mores offering. Just a few weeks ago, the company, founded in 2015 and headquartered in Grantsville, received a Black Owned Business of the Year award from the San Diego Business Journal for thriving amidst the pandemic and for its involvement in the community.

For Maya Madsen, founder, the gourmet, plant-based cookie company was initially just a way to create an additional revenue stream while doing something she was passionate about: baking vegan goods.

She offers 12 flavors as part of her main menu, including Birthday Cake and Marble Fudge, and up to 20 additional flavors – like gingerbread – during the holiday season. Last year, she also dropped a Black History Month collection, which she plans to release every year moving forward.

Today, Maya’s Cookies is not only celebrated on a local and national level, it is on a rapid growth trajectory, she said.

With 16 employees, the company bakes about 1,000 cookies per day, seven days a week, doubling production during peak seasons. Last year, it increased its annual revenue over the previous year by six times. In June 2020 alone, Maya’s Cookies experienced a 10,000% increase in sales, said Madsen.

This year, the company is on track to potentially triple its 2020 numbers.

How it All Started

“Maya’s Cookies started in 2015 because I couldn’t find a gourmet plant-based dessert cookie on the market, so, I created my own,” said Madsen, an African American woman herself and a mother of three. “I was a personal trainer at the time, so, I started selling cookies to my clients, my friends and my neighbors. Once I was up to baking about 20 dozen cookies a week at home, I figured out how to turn it into an official business. That was three months in – so I started in July 2015, baking out of my home, and by November 2015 I had officially launched the business.”

That’s when Madsen began renting a commercial kitchen and, with $3,000 on a personal credit card, purchased a booth and began selling at San Diego Farmer’s markets. Shortly after and based on demand, from tourists asking if she would ship Maya’s Cookies to their hometowns, Madsen launched her ecommerce website, MayasCookies.com, in 2016.

In 2018, Madsen moved out of the commercial kitchen and set up her own, in Grantsville. Last November, in the midst of the coronavirus crisis, she opened her first brick and mortar, conveniently located at the building’s lobby. Even though it is only open 25 hours a week, it already represents 50% of her business, said Madsen.

“Our cookies stand out for several reasons,” she said. “I use high quality artisanal ingredients and they are all hand scooped, so they are visually beautiful and delicious. But the main thing is they are plant based and can be enjoyed by anyone.”

Donna DeBerry, president and CEO of the Central San Diego Black Chamber of Commerce, said Madsen’s story is one of diligence and community involvement.

“Maya’s story is not one of overnight success,” she said, “it is a story of hard work and community service. From a farmer’s market favorite to a national spotlight, Maya’s Cookies has been featured in numerous local and national media… Maya has placed emphasis on strong jobs and building relationship with vendors, leading round tables of local vegan businesses, mentoring up-and-coming businesses and giving back to local non-profit charity and educational institutions.”

Madsen said she has been asked to speak in numerous workshops and panels by Farmer’s Markets managers, to help emerging vendors better understand the business and have the necessary tools for success. Madsen focuses on mentoring other Black entrepreneurs in the food industry and also rents out her commercial space to female plant-based bakers so that they can have a low-cost space through which they, too, could launch a business. Madsen also partners with La Cocina, a national restaurant chain, to help women of color in the hospitality industry.

In the future, Madsen hopes to continue to grow the Maya’s Cookies brand.

She said she plans to open a second and maybe a third location down the line and wants to build up the corporate revenue channel by contracting with major universities, amusement parks and airlines, among other corporations. She is currently readying to launch a Series A to raise more funds for expansion.