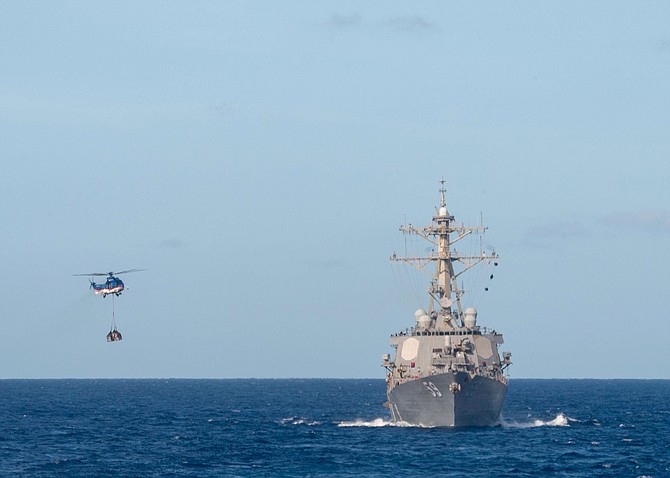 BAE Systems San Diego Ship Repair will modernize and repair the destroyer USS Russell. The ship has been deployed with the Theodore Roosevelt Carrier Strike Group. The Russell is shown March 6 in the Pacific Ocean, receiving supplies by helicopter.

The U.S. Navy awarded BAE Systems San Diego Ship Repair a $34.7 million contract for work on the Arleigh Burke-class destroyer USS Russell. The deal calls for a combination of ship maintenance, modernization and repair. It includes options which, if exercised, would bring its value to $49.9 million.

This is a Chief of Naval Operations scheduled selected restricted availability, as well as a “long-term” availability offered to all West Coast shipyards (some contracts limit the place of performance to the vessel’s homeport). Work is expected to be completed by September 2022. This contract was competitively procured using full and open competition via the Federal Business Opportunities website with three offers received.

Separately, the Navy awarded Continental Maritime of San Diego a $32.5 million contract for a combination of maintenance, modernization and repair of the USS Somerset, a San Antonio-class amphibious transport dock ship commissioned in 2014. The deal includes options which, if exercised, would bring the value of the contract to $38.4 million. Work is expected to be completed by June 2022. The contract was competitively procured using full and open competition via the Federal Business Opportunities website, with two offers received.

Both shipyards are in the Barrio Logan district of San Diego. The Naval Sea Systems Command of Washington, D.C., awarded the contracts, announced on March 8 and March 12.

Each business received $2,000 at contract award. The total value of Epsilon’s deal could be as much as $841 million. Work will be assigned to the 11 contractors according to individual task orders. Forty percent of the work will be on the West Coast, including San Diego; 45% on the East Coast; and 15% outside the continental United States.

Soltek to Build at China Lake and Travis AFB

Under a $44.4 million deal, Soltek will build a technical services laboratory and ordnance testing and evaluation facility at Naval Air Weapons Station, China Lake near Ridgecrest, in the California desert. The deal is technically a task order to a previously awarded contract. The task order contains eight options which, if exercised, would make the deal worth as much as $46.8 million.

The deal calls for Soltek to build a technical services laboratory facility including offices, labs, workshops and storage. The work also provides for the construction of an ordnance test support facility to include offices and light industrial shop spaces. The options provide for the electrical security system, furniture, fixtures and equipment.

Work is expected to be completed by May 2023. The Navy received seven proposals for the task order.

Separately, Soltek received a $21.9 million task order under a multiple award construction contract for construction of a regional maintenance training facility at Travis Air Force Base, midway between San Francisco and Sacramento. The facility will house KC-46A maintenance training devices and associated equipment, large scale mock-ups, classrooms and training devices to provide specialized hands-on training. The task order also contains six unexercised options and two planned modifications which, if exercised, would make the contract worth as much as $22.5 million. Work is expected to be completed by January 2023. The Navy received two proposals for this task order.