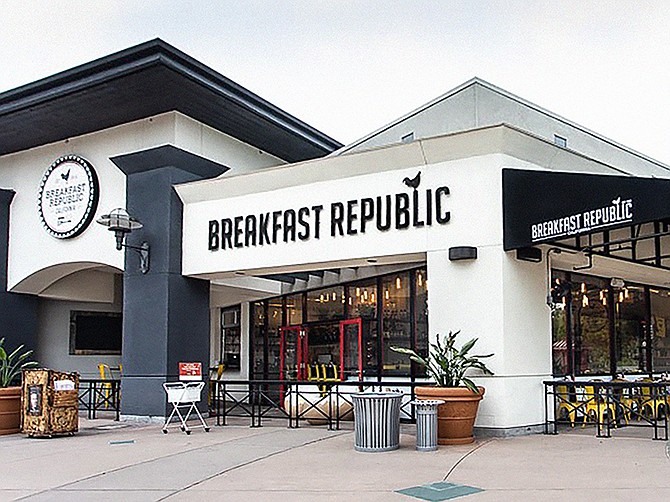 Since founding Rise & Shine Hospitality Group in 2008, Johan Engman, founder and CEO, has been positively impacting the San Diego community and the local economy.

Under the company, Engman owns and operates 18 restaurants, including Feast and Fareway at the Coronado Municipal Golf Course, two Fig Tree Cafes, numerous Eggies and Breakfast Republics and a Breakfast Company – all located in Southern California.

Since the onslaught of the pandemic, despite being open at limited capacity at just 17 of his properties (California Taco Club at Pacific Beach remains closed), the restaurant group has made it its mission to continue to serve the local population while simultaneously preparing for future growth.

During the global crisis, Engman, originally from Sweden, pivoted from running just the hospitality side of the business to fulfill what he deemed was his civic duty.

Through his Rise & Shine nonprofit, which was established three years prior to the onset of COVID-19 last March, Engman funneled $79,290 and served a total of 8,983 meals to laid-off workers from impacted industries during the shutdown. Money accrued for the effort came primarily from the sale of breakfast burritos, from which $1 for every item sold was donated back to the nonprofit, he said, as well as from donations from generous community members.

The philanthropic program effectively ran during the two shutdowns of 2020, said Engman, with patrons presented pre-made meals like lasagna, chicken and rice and fish.

“In March 2020, we said, ‘you know, there are so many people affected by this, not just in hospitality but across the board’,” said the father of two about the inspiration behind the philanthropic program. “So, we made the announcement that, any day, anyone affected by COVID-19 lay-offs could come to Breakfast Republic in Mission Valley and would receive a free dinner meal, no questions asked. Between the two shutdowns, we donated about 9,000 meals and about $78,000 worth of meals. I can’t tell you how heartwarming it is when you have someone come up to you and say, ‘I haven’t had hours at the job. To know I can come once a day and grab a meal for me and my daughter has helped us so much.’”

In addition to donating nutritious meals to San Diego residents in need, Rise & Shine also presents $1,000 to a different local nonprofit once a month.

Engman said he also collects funds for the ongoing effort via sales of the aforementioned breakfast burritos. He then asks his social media followers to tag him on posts about organizations that are close to their hearts. Once they are vetted, Engman and his team decide on which group to gift the money to each month, as long as its mission aligns with that of Rise & Shine’s, he said.

All expansion plans for Rise & Shine Hospitality Group were put on hold in 2020. But now that the vaccine has rolled out and experts project a return to “normalcy” by the end of summer, Engman said he is refocusing his efforts on growth again.

His primary goal at this point is to open more Breakfast Republic and Eggies locations, he said, as well as look for opportunities for Fig Tree Café and Breakfast Company, the latter which was founded in 2019.

So far, things are looking promising.

“Currently, I have the following locations confirmed with leases signed” for planned openings later this year, Engman said. “Three more Breakfast Republic locations – two in San Diego and one in Los Angeles – three more Eggies locations, all in San Diego, and one more Fig Tree Café in San Diego.”

Already in the works for 2022 are three additional Breakfast Republic restaurants, in Orange County and Los Angeles, another Fig Tree Café in San Diego and three more Eggies spots in San Diego and Los Angeles. Engman also added he has a pretty aggressive growth plan through 2024 which includes expanding some of the Rise & Shine brands outside of California.

Sarah King, chief financial officer for Rise & Shine Hospitality Group, said this is the right time for the company to step out of the COVID ashes.

“Our plans for growth have not been deterred by the pandemic,” she said. “We are continuing to expand throughout Southern California and will have locations outside of California within the next four years. The changing landscape of the restaurant industry is full of opportunities and we are looking forward to continuing to thrive post-pandemic.”

If there is one positive that has come out of the coronavirus crisis is that it presented him the opportunity to step up and help destitute persons in his own backyard, said Engman.

“It’s easy for people to say, ‘when we are doing good and making money, we give back’,” he said, “but it’s a different thing to stick with it when you are also down on your knees. We are proud to have been able to give back.”