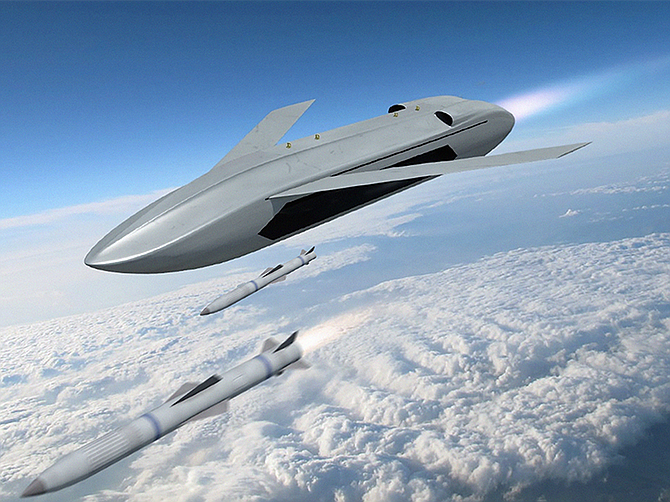 Rendering courtesy of DARPA. An artist’s rendering from the Department of Defense shows an unmanned LongShot aircraft firing missiles. General Atomics Aeronautical Systems Inc. is among three contractors that will work to make the concept a reality.

The Pentagon’s R&D arm has awarded Poway’s General Atomics Aeronautical Systems Inc. a $9 million contract for preliminary work on a new type of unmanned military aircraft called LongShot. The deal could grow to slightly less than $29 million if the Defense Department exercises options in the contract.

GA-ASI is one of three aerospace companies working on the LongShot program. Similar contracts have gone out to Northrop Grumman Corp. (NYSE: NOC) and Lockheed Martin Corp. (NYSE: LMT).

Phase one of the deal with GA-ASI covers research and development into the LongShot concept as well as demonstration of the technology. It will run until February of next year.

“Current air superiority concepts rely on advanced manned fighter aircraft to provide a penetrating counter air capability to effectively deliver weapons,” DARPA said in a statement. “It is envisioned that LongShot will increase the survivability of manned platforms by allowing them to be at standoff ranges far away from enemy threats, while an air-launched LongShot UAV [unmanned aerial vehicle] efficiently closes the gap to take more effective missile shots.”

According to DARPA, in later phases of the program, the contractor will construct and fly a full-scale air-launched demonstration system capable of controlled flight, before, during, and after weapon ejection under operational conditions.

All three contractors have had successes in the unmanned aircraft field.

Northrop Grumman, for its part, built the X-47B unmanned aircraft that successfully operated from the deck of an aircraft carrier. It also builds the autonomous Global Hawk and Triton aircraft as well as the Fire Scout autonomous helicopter. Those programs are all based in San Diego. Northrop Grumman’s work on its LongShot aircraft will be based in other cities.

Lockheed Martin has built stealthy, unmanned aircraft such as the RQ-170 Sentinel. Its Skunk Works is famous for aviation breakthroughs.

General Atomics Aeronautical is an affiliate of General Atomics, with headquarters on Torrey Pines Mesa near UC San Diego. The companies are privately held. Neither discloses its revenue.