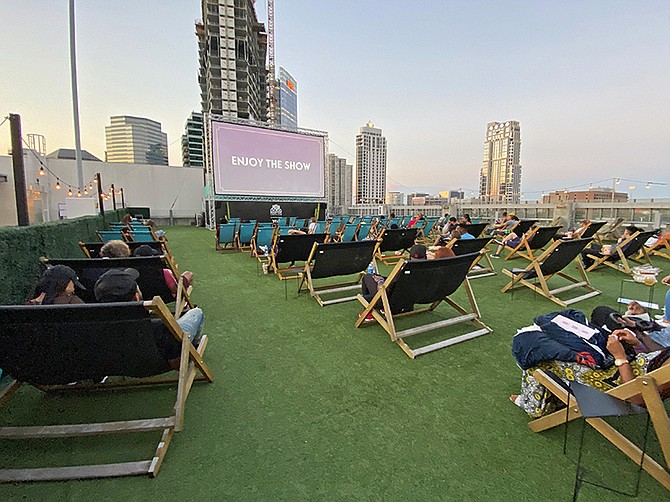 After a year closed, Rooftop Cinema Club Embarcadero will be reopening its San Diego-based outdoor movie theater on March 18.

Located at the Manchester Grand Hyatt San Diego in the Gaslamp Quarter, Rooftop Cinema closed its S.D. operation a year ago due to the COVID-19 pandemic. In other cities, like Santa Monica, Calif., and Houston, Dallas and San Antonio, Texas, the Los Angeles-based company was able to pivot to a drive-in model starting in May. But not in San Diego, said CEO and Founder Gerry Cottle, as a result of him not being able to secure a big enough open-air lot for it.

That’s why he’s so thrilled San Diego is the first city to which Rooftop Cinema, founded in 2011 and with an annual revenue of $6.5 million in 2019, will make a return.

“We couldn’t find the right space in San Diego (for the drive-in theater) – we tried and couldn’t make anything work during that time,” said Cottle, originally from London, England. He adds that Rooftop Cinema staffs over 100 employees onsite per screening and has roughly 20 full-time corporate employees. “That is why this is the first rooftop we are bringing back. We wanted to make sure to reconnect with the San Diego community as soon as we could.”

Cottle worked closely with Manchester Grand Hyatt to reopen while following all mandated health and safety guidelines. He said he was able to get additional footprint on the rooftop space in order to fit as many chairs as possible while maintaining social distancing protocols. Before the coronavirus crisis, Rooftop Cinema hosted 220 visitors per screening, he said. These days, it will be able to fit 162, just slightly less than before.

Rooftop Cinema will continue to run its concession stand, which will still provide popcorn, said Cottle, just not the previous bottomless option to avoid contact. The Grand Hyatt will continue to fulfill food orders from its own menu, as well as cocktails and liquor options. Additionally, Rooftop Cinema will no longer provide blankets and pillows to movie viewers in order to limit cross exposure, said Cottle. Instead, it will encourage guests to bring their own covers and head rests.

“The return of Rooftop Cinema Club Embarcadero to our fourth-floor terrace at Manchester Grand Hyatt San Diego is an exciting addition to the hotel’s offerings and amenities,” said Daniel Kuperschmid, area vice president and general manager at Manchester Grand Hyatt San Diego. “We’ve worked closely with the team to enhance the overall experience with new additions including a full-service bar, larger footprint to allow for social distancing, kid and dog-friendly offerings and more.”

Because Rooftop Cinema already takes place outdoors, making it a relatively safe and COVID-friendly activity, Cottle said he believes the event will attract new and old visitors alike upon its return.

"Rooftop Cinema reminds moviegoers of the community aspect, the socializing before the screening then sit down and watch a good flick.," he said. "I think people are going to want to do this together even more and feel a part of the community again.”

With safety of all staff and guests in mind, Cottle added all chairs and personal headphones will be sanitized between viewing and everyone will be required to wear a face covering.

Now that Rooftop Cinema is back up and running, albeit a slightly limited capacity, Cottle is looking forward to continuing to grow the brand’s presence in the county and beyond. By the end of this year, he hopes to bring drive-in projects to Miami and Tampa, Florida, and Houston, Texas, as well as open two more rooftops in Miami and Houston. By 2022, he hopes to have locked in an outdoor location to launch a drive-in theater in San Diego.