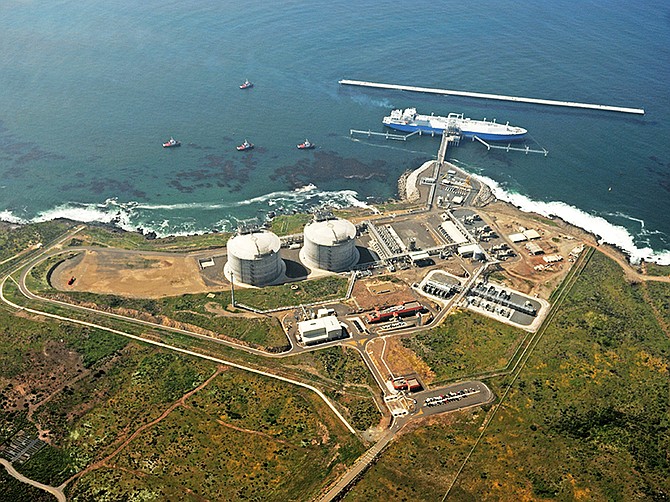 Photo courtesy of Sempra LNG. Sempra Energy plans to spend $2 billion on the Engergía Costa Azul plant near Ensenada in Baja California, and begin exports of liquefied natural gas in 2024.

The sale of Sempra’s utilities in Chile and Peru in 2020 — part of a plan to focus the business on North America — resulted in a one-time gain of $1.75 billion for the year. Disregarding that gain, Sempra’s adjusted earnings were $2.35 billion, still 23% higher than 2019 adjusted earnings of $1.91 billion.

In laying out its earnings on Feb. 25, Sempra offered details of a revised, $32 billion capital investment plan that will take it through 2026. The plan calls for approximately $1.1 billion in additional spending in 2021 and 2022. Overall Sempra plans to spend $9.8 billion on its Texas utilities, $9.6 billion on SDG&E, $9.2 billion on Southern California Gas and $3.1 billion on general infrastructure.

The corporation also updated plans to put Sempra’s LNG business and IEnova, its Mexican electricity business, under the umbrella of a new entity called Sempra Infrastructure Partners. The company plans to launch a stock-for-stock exchange offer for the publicly traded shares of IEnova, with the Sempra Energy exchange shares to be listed on the Mexican stock exchange.

In addition, Sempra plans to sell a non-controlling interest in Sempra Infrastructure Partners during the second quarter of 2021. The business said it plans to use proceeds to fund growth.

“Our strong financial results in 2020 reflect the continued growth in our business and are a credit to our talented workforce and investments in a high-performing culture,” said Jeffrey Martin, chairman and CEO of Sempra Energy.

In the fourth quarter of 2020, Sempra reported earnings of $414 million (or $1.43 per share) on revenue of $3.17 billion, when calculated according to Generally Accepted Accounting Principles, or GAAP.

Non-GAAP adjusted earnings for the year — which left out impacts associated with Aliso Canyon litigation and regulatory matters — came to $553 million, or $1.90 per share. Analysts surveyed by Yahoo Finance collectively expected $1.56 per share.

In the same quarter one year ago, Sempra reported earnings of $447 million, or $1.55 per share, on both a GAAP basis and an adjusted basis.

Oncor, Sempra’s main Texas utility, is a fast growing business, with 77,000 new connections in 2020, up 20% from the previous year. The Texas business found itself in the middle of an electricity crisis in February, when severe winter storms in the Midwest led to blackouts.

During an investor conference call Feb. 25, Martin said he knows people are hurting in Texas and he thanked Oncor employees for their work during the crisis.

“I think the most important thing is Oncor stood tall during last week’s event,” the CEO said. “I think they were one of the more positive participants in the overall marketplace. That’s also a view shared by the governor, by the way.”

In the wake of the crisis, Martin said he expects companies to make more investment on transmission and distribution in Texas. Sempra’s five-year plan is to spend $9.8 billion in the state. “We think that spending more capital will certainly be part of the solution,” he told analysts.

Sempra also reviewed its decision to go ahead with building and operating a natural gas liquefaction and export project at the Engergía Costa Azul import site near Ensenada in Baja California, Mexico. Partners in the project expect to spend $2 billion for an initial phase of the project. In December, the partners announced that Total, the French energy company, took a 16.6% stake in the plant. Sempra and IEnova each hold 41.7% of the project.

Sempra expects to fund the project with a combination of equity and debt. The plant is expected to produce its first LNG in late 2024, and Sempra is considering a second phase.

Martin also looked farther ahead in his earnings remarks.

“As the owner of one of the largest energy networks in North America, we have set a goal of being a leader in transitioning to a lower-carbon future by enabling the delivery of cleaner energy solutions in every market we serve,” he said. “We envision critical new investments in energy infrastructure playing a vital role in reaching a net-zero energy future, promoting growth across all sectors of the economy and supporting a thriving energy industry.”