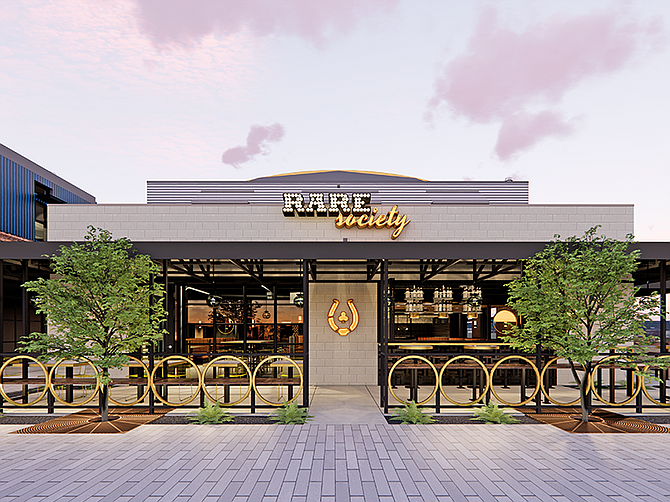 Trust Restaurant Group, the Hillcrest-headquartered hospitality group behind such San Diego food places as Cardellino and Fort Oak, is bringing another culinary effort to the city.

Scheduled to open in June, a second Rare Society restaurant, Trust’s retro steakhouse, is currently under construction in Solana Beach. The project marks the $5 million company’s seventh food offering and its first foray into North County.

“The Rare Society Cedros location was already in the works before the pandemic started,” said Brad Wise, owner and chef at Trust Restaurant Group. “We had the location and brokered a great deal with the landlord of the building. The original location in University Heights was open maybe five months before we closed it due to COVID, but we are super passionate about the Rare Society brand. You just kind of feel it sometimes.”

As a result, Trust Restaurant Group is expected to reach $15 million in revenue this year, surpassing the $10 million it made in 2019 – pre-COVID – and the $5 million in garnered in 2020.

The Solana Beach location is 3,000 square feet in size, said Wise, with about 900 square feet of patio space and 35 seats outside including the indoor/outdoor bar. The patio will be a year-round enclosed space, he said, that can and will most likely be uncovered during the summer months.

Wise describes the interior as a refined Las Vegas-style steakhouse. The menu will include caviar and truffle courses, said Wise, and the kitchen will have a wood-fire Santa Maria type of grill.

Rare Society Solana Beach is just one of a handful of food and beverage places Trust Restaurant Group has opened since the pandemic hit almost a year ago.

In May, just two months after the first confirmed coronavirus case stateside, the hospitality company opened Mr. Trustee Scoop Shop in the Mission Hills area. In August, it acquired North Park’s Heart & Trotter butchery and converted it into The Wise Ox Butcher & Eatery, which opened mid-September.

“The ice cream shop does amazingly well when it is hot and slows down a bit when it is cold,” he said, adding that it doubled his initial $1,000 in sales per day projection during the warmer season. “The butcher shop has been the biggest surprise of my career. It was the last investment I was going to make during the pandemic, but it ended up being one of the best things I could’ve ever done. In fact, I paid the initial investment back in profits plus 25% in the first 2.5 months open.”

Part of The Wise Ox’s success has been its monthly subscription program, which Wise launched in October.

For $125/month, members get eight to 10 items, said Wise, including 10.5 to 12 pounds of ground beef and sausage and a whole organic chicken. One of the most popular items is the whole beef shank, he said, which comes with a recipe suggestion.

The expectation was to get at least 25 members per month to join the subscription program, said Wise. Today, that number is close to 200, he said, adding that the everyday operation at Wise Ox is doing well as well.