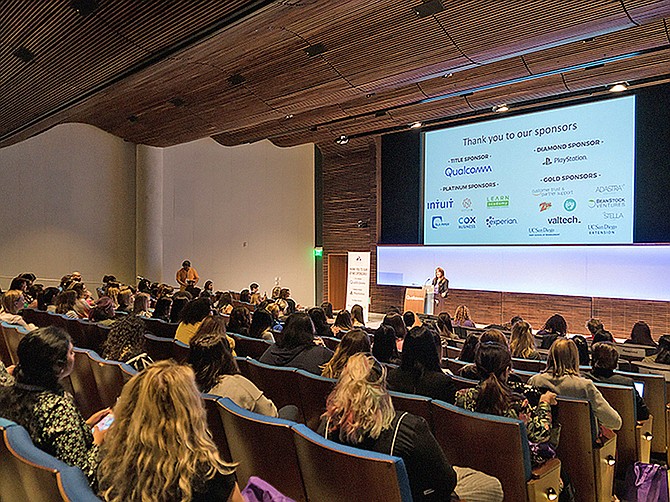 Photo courtesy of #LatinaGeeks. In March 2020, #LatinaGeeks partnered with San Diego-based advocacy organizations including Athena, Blacks in Technology, Designing Women, Girls in Tech, and Women Who Code to host an inaugural Women’s Tech Summit at Qualcomm.

LatinaGeeks, a nonprofit focused on increasing the number of Latinas in technology-related careers, aims to expand its reach into more cities after seeing exponential growth over the last two years.

After consistently filling up their educational workshops that introduce Latina’s to tech-related resources and careers, they decided to turn the idea into a non-profit in 2018.

Since its inception, the organization has grown to support more than 4,000 members across several California-based chapters, including San Diego, Orange County, Los Angeles, San Francisco and Seattle, its newest chapter.

Ana Reyes, president at the #LatinaGeeks San Diego Chapter, said the local organization which out of a broader Southern California chapter, adding that it has a distinct San Diego character attracting determined women throughout the region.

“We already had several success stories where our members have end up getting a promotion or a raise from their boss. For example, when they apply for a promotion, they can mention they took our bootcamp where they learned about data analytics,” said Reyes. “ It really levels them out.”

Roughly half of the local chapter’s members come from the National City and Chula Vista area, said Reyes. The local chapter strategic partners include Microsoft, UC San Diego Extension, Intuit, COX, among others.

“The technology sector in San Diego has been booming, it’s our most active chapter with Los Angeles being our most second active,” said Castro. “We also have members in Orange County, San Francisco, and a large community in Seattle.”

In the early days, #LatinaGeeks focused primarily on livestreaming content on platforms like YouTube and Facebook. It has since evolved hands-on workshops, panel discussions and in-person events covering such topics as cloud computing, cybersecurity, and mobile app development.

The events are also designed to introduce Latinas to the idea that they don’t have to have a computer science degree to enter a STEM field or get a tech-based job, said Reyes. Its events cost range from five to up to $20.

The nonprofit also produces annual events such as the San Diego Tech Women’s Summit which attracted over 300 woman leaders in technology at its inaugural event last year.

Due to restrictions of hosting large scale in-person events in 2021, the nonprofit has reimagined its flagship event virtually and are also hosting unique experiences.

“Right now as we’re seeing record numbers of women that are losing their jobs. Many of them realized that they need to upgrade their skills,” said Reyes. “Whether their stay-at-home moms or women working in a predominately female role, our job is to support and educate them. Ensuring that they’re stay up-to-date with terminology, certifications, and more.”

LatinaGeeks comprises of primarily women, aiming to expand statewide, the nonprofit plans to double its member base over the next several years.

By the end of March, the organization plans to launch an online job board to support women looking to break into the tech industry. Latina Geeks will also seek to raise funds to fuel its growth and expansion initiatives this year.

“Our overall goal is to bridge the gap. There are fewer than 3 percent of Latinas in the computing industry. Each workshop we do is a way to contribute to closing that gap. We’re actively looking for corporate sponsors,” she added.