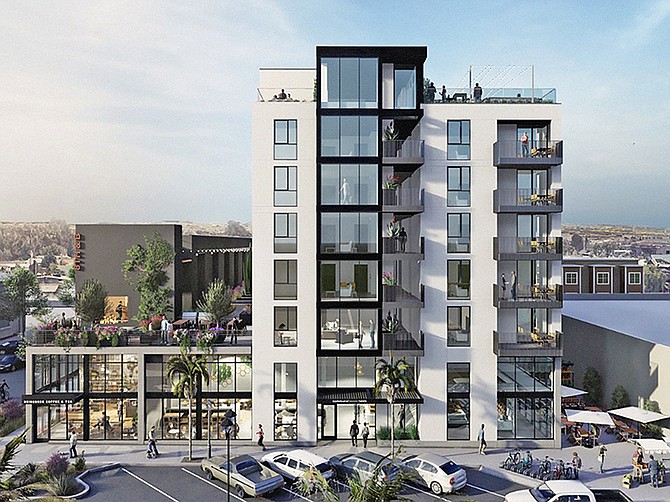 A National City development designed by The Miller Hull Partnership and being built by Malick Infill Development and Protea Properties will bring a market-rate mixed-use project to the city’s downtown core.

The cost of the project was not disclosed.

“We’re building something in an area of National City, it’s sort of an emerging urban core the city has put a lot of energy into improvements in the area and increasing the density in the area,” said Ben Dalton, principal of The Miller Hull Partnership.

Construction is expected to be finished in the fourth quarter of 2021, Dalton said.

“We’re the first building to go in in this building cycle. We wanted to have a very diverse building that provides a lot of opportunities for both residential and retail tenants,” Dalton said. “National City is just a great place right now. There’s a lot of energy that is going into that district- buildings being renovated, food and beverage restaurants coming online.”

With a portion reaching a height of eight stories, the project at 8th Street and B Avenue is a mix of residential, office and retail space.

An eight story tower will be adjacent to a four-story building. The difference in height was required to meet zoning regulations that split the site.

“It impacted the massing of the project but in a positive way,” Dalton said. “The building changes its massing and its height as you move your way around from the urban front of the building to the residential back of the building. I think the zoning worked with its intent, the zoning fit with its context.

“There’s a diversity of scale and typology that should fit a broad demographic of tenants,” Dalton said.

Monthly rents were not disclosed, but Andrew Malick, founder and principal of Malick Infill Development, said rents would be priced for middle income families.

A Ton of Energy

He said the goal is attract tenants of a wide range of ages, from people starting out to retirees.

All of the apartments have floor-to ceiling windows.

“There’s really a view in every direction from this building. It’s really incredible once you up there, anything from the podium up,” Dalton said. “You have ocean to the west, city and mountains to the east.”

The apartments also have operable windows.

Combined with hallways that are all exterior, they provide natural ventilation throughout the building.

Malick said that the project comes at a time when “there is a ton of energy in South Bay.”

“The Navy announced that they’re bringing two more carriers to San Diego Bay, which brings 6,000 more sailors,” Malick said. “Furthermore, the Chula Vista Bayfront project just down the road is moving forward. They got their financing. That’s going to be 4,400 permanent jobs. Lastly, the Amazon facility that they’re building down by the border, there’s a lot of jobs coming to the South Bay and we’re delivering sort of middle-income housing.”