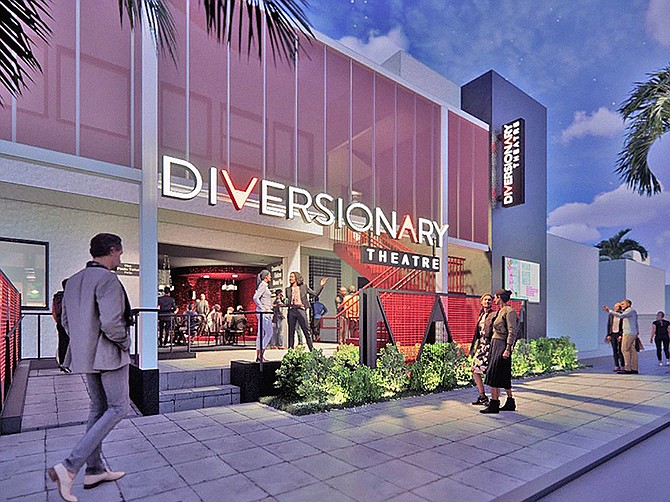 A University Heights theater that has become a landmark for San Diego’s LGBTQ community is getting a complete overhaul, from a new façade to the addition of a cabaret performance stage.

“Every part of the building is being touched,” said Matt Morrow, executive artistic director of the Diversionary Theatre.

Originally a medical office building, the $2 million renovation of Divisionary Theatre, 4545 Pak Blvd. is long overdue, Morrow said, adding that there’s “a bunch of deferred maintenance that needs to be addressed.”

“We’ve been working on this project for a little over two years,” Morrow said.

The theater is running a drive to raise the $2 million for the renovation and $500,000 to pay off its mortgage on the property, Morrow said.

Construction started in January with a goal of reopening the theater in summer.

“I don’t want to disparage the space because we were able to make magic,” Morrow said. “It’s a wonderful theater facility in University Heights and we love it, but the building was never meant to be a theater.”

The theater company moved into the building 27 years ago and over time, converted it into a performance venue with a main theater that has 106 seats and a secondary “Black Box” theater that has about 50 seats. Both are on the second floor.

“It’s really taken wear and tear and it desperately needs a face lift or I’ll call it a body lift,” said Taal Safdie, co-founder of Safdie Rabines Architects, the firm that designed the renovation.

The general contractor is White Construction, Inc. based in Carlsbad.

“One of the first things we did was really change the front of the building and make it feel more inviting,” Safdie said.

An outdoor staircase leading from the patio to the second floor will be redone.

Before the change, the staircase opened onto the street and people had to leave the property to get to the second floor theaters.

The new staircase will connect an outdoor patio on the ground floor to the second floor.

A gate to the patio also will be added with the theater logo on it.

“It’s kind of a little bit of a logo sculptured security gate,” Safdie said. “The ticket area and pre-function area, which is a little bit of broken-up space, we made into a larger, more fluid area where you buy the tickets. It also includes a nice long bar which didn’t exist there before. It was just a little area where you could stand in line to get a drink.”

A cabaret/piano bar also was added in the lobby.

Sliding glass doors will be added so the lobby opens up to the patio.

Restrooms will be redone with reflective tile on the walls.

The addition of Ye Olde Gay Bar in the lobby is meant to pay homage to a time when people who identified as LGBTQ met in private spaces and gay bars that were often raided by police.

With the changing times and more acceptance of LGBTQ people, “Gay bars have sort of been going away,” Morrow said.

“More LGBTQ people are moving into the mainstream and becoming more open. We wanted to honor the gay bar as a community space where our community has organized,” Morrow said. “We want to highlight the significance of having a safe space for the LGBTQ community.”

The bar highlights the history of the LGBTQ community in San Diego and elsewhere with newspaper clippings embedded in the top of the bar and on two walls.

A lighted multi-colored accordion panel behind the bar will carry messages that change, depending on the vantage point – “You’re in the right place” and “Ye Olde Gay Bar.”

On the second floor, the main theater will be completely redone with bigger seats, an interior wall removed to improve sight lines, and new lighting installed.

Dressing rooms and a new restroom for the actors also will be added and a scene shop for building sets between the main theater and the Black Box Theater will be reconfigured.

The interior of the entire building will be repainted to match the color scheme of the logo.

Safdie Rabines has incorporated a number of safety features in the design of the renovation in response to the COVID-19 pandemic, including the use of microbe resistant paints and materials and touchless bathroom fixtures.

New brightly colored theater seats will be made of a leatherette material that is easy to clean.

Morrow said he’s hoping that the safety measures will make people feel comfortable about returning to the theater.

Founded in 1986, the theater’s name is meant to be inspirational.

“Diversionary was founded at the height of the AIDS epidemic and it was founded to give light to the LGBTQ community,” Morrow said. “It shined a light on what was happening. It was also there as a diversion from the AIDS crisis. It was a way for the community to come together away from the tragedy.”

Morrow has since given a more up-to-date interpretation of the name.

As a community, “We are diverse and we are visionary and that makes Diversionary. The two work together to describe the work that we do,” Morrow said.

Morrow said the Diversionary Theatre is the third oldest LGBTQ theater in the country.

The renovated theater also will have a space for the Lambda Archives of San Diego, a historical record of the LGBTQ movement.

“Anyone interested in studying the history of LGBTQ in Southern California will go into the archives,” Morrow said.