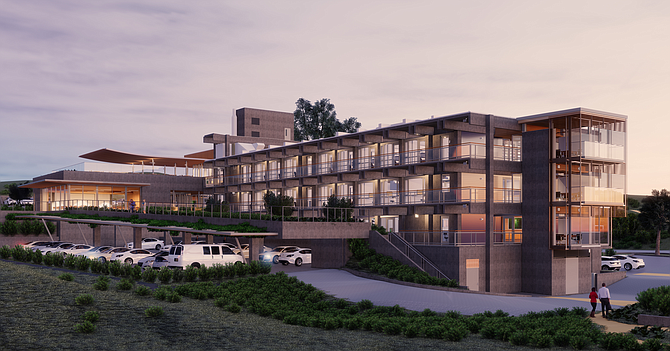 A 1960s-era marine research center at Scripps Institution of Oceanography is getting a new look. Rendering courtesy of Safdie Rabines Architects. 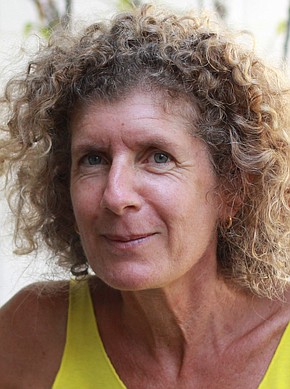 In some respects, the center will be turned inside out with a deck overlooking the Pacific Ocean to take advantage of the center’s spectacular location at the edge of a bluff that has been reinforced to protect against erosion.
Two of the four buildings were razed in 2011, leaving one building and the basement of a second.
The hillside was reinforced in 2014 to make way for the redevelopment.
The remaining 24,915 square-foot building is being renovated with the addition of 7,890 square feet of new lab space, faculty and graduate student offices, conference rooms and support spaces.
The 5,430 square-foot addition will have a lecture classroom, a visualization lab, administrative offices, a rooftop café, and a catering kitchen.

Tight Squeeze
Taal Safdie, co-founder of Safdie Rabines, said the old center was built in a “brutalist” style that was typical for the period.
“It’s not a bad looking building,” Safdie said, but it didn’t meet the needs of 21st Century researchers and didn’t take advantage of the picturesque site. 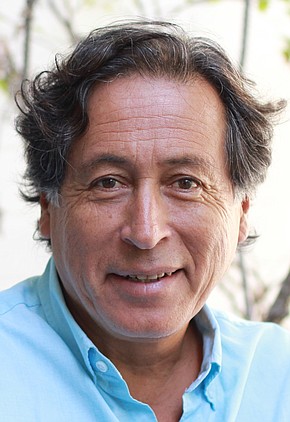 “There were four wings of the building, kind of creating a courtyard. Three of the wings were demolished because it was right on the bluff,” Safdie said.
The third wing was left standing, but the foundation had to be brought up to current seismic standards.
“There were a lot of challenges to that,” Safdie said. “You don’t have the flexibility that you would have starting from scratch.”
Among other things, ceilings in the old building were a mere eight-feet.
“That’s extremely challenging for today’s laboratories which are all about flexibility with all the venting requirements,” Safdie said. “Normally, you would have 15 feet (ceilings) with lots of room for ductwork, etcetera.”
Squeezing everything in “took a lot of surgery to make sure everything could fit and still allow for the flexibility,” Safdie said.

The View
“The other thing about it was we started off with a building that was kind of surrounded by parking right on one of the most exquisite sites in San Diego.”
The best views were from the parking lot.
The new design changes that with the new deck extending over the parking lot, serving the dual purpose of opening up the center, providing views for the people who use it instead of parked cars, and providing sheltered parking.
The renovation of the remaining structures will add eight new teaching and research labs.
A new addition adjacent to the old building will have an open-air classroom, lecture and conference area, a rooftop café, and tow stepped terraces built over a parking lot for special events. 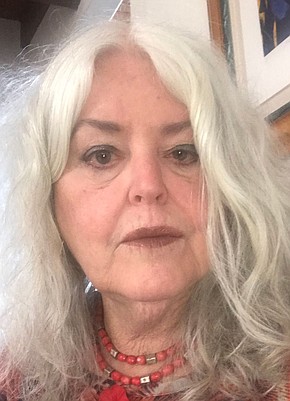 “We’re actually pulling people from several different buildings,” Ingram said. “What this does is give them a chance to be in one building to improve collaboration. It also provides people a chance to expand research of for Scripps to have new faculty members.”
The center will include a 4,000 square-foot research aquarium capable of chilling water to artic conditions or using water at ambient temperatures, Ingram said.
“Having this large research aquarium there will allow scientists who are in the building as well as in other areas of Scripps to do a lot of experiments that they have not previously been able to do,” Ingram said.
Research will include developing ways to predict what oceans will be like in the future and measuring the acid level of seawater, which affects the development of various sea creatures.
The grounds around the structure are also being folded into the redesign of the center to provide connections to the outdoors.
“This building and the site location are between the upper campus and the lower campus,” said Ricardo Rabines, co-founder of Safdie Rabines. “It’s been conceptualized as a place of gathering between the two campuses.”
The original center was built in 1964 as the Southwest Fisheries Science Center for the National Oceanic and Atmospheric Administration (NOAA), which had a 50-year lease on the property, Ingram said.
NOAA turned the property over to UC San Diego in 2015, and the university retained Safdie Rabines to redo the center in 2016, Ingram said.
Because of permitting and other issues, “It took a while before we were able to actually start construction,” Ingram said.
The project is scheduled for completion in early 2022.