Palomar Health’s Pomerado Outpatient Pavilion in Poway was sold to a Nashville investment firm for more than $100 million. Photo courtesy of CoStar. 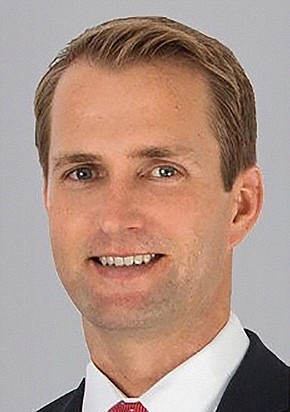 The 160,000 square foot medical office building was acquired by Health Care Realty based in Nashville for more than $100 million, although the exact purchase price and terms of the new lease were not disclosed.
The building is adjacent to Palomar Health’s Palomar Medical Center Poway hospital.
The deal was unusual both because of its complexity, the number of parties involved, and the size of the transaction, said Travis Ives, managing director of the U.S. Healthcare Capital Markets Team based in San Diego.
Deals of $100 million typically are for a portfolio of several buildings rather than a single building, Ives said.
“For a single building to trade in excess of $100 million, that’s pretty rare. There’s only a few of those in a decade,” Ives said.

A Growing Portfolio
With the money it saves in lease payments, Palomar Health plans to expand its services in the Outpatient Pavilion, but the agency declined to give any details.
Existing services include primary care offices, women’s services including prenatal care, dieticians, and weight management programs.
“The savings achieved and fresh capital will support our commitment to delivering the best care to the communities we serve while being stewards of the district’s assets,” Diane Hanson Palomar Health’s CEO said in a statement.
Health Care Realty’s purchase of the Pomerado Outpatient Pavilion is the latest of a series of investments the company has made in San Diego County since first entering the market in 2020.
“They’re building out a nice, well-rounded portfolio,” Ives said.
The company bought Torrey Hills Medical Plaza in December 2020 for $37.3 million, and a Hillcrest medical office, 330 Lewis, in January 2021 for $17 million, Ives said.

Hot Property
Ives said Palomar Health and Cushman & Wakefield had been working since 2016 putting a deal together that would relieve the health care system from a burdensome lease agreement.
Although unusual in the details, the sale of the Pomerado Outpatient Pavilion is part of a growing demand for medical office space in San Diego County.
“Capital that maybe previously had been slated for (general) office or retail is now looking at medical office. What we’ve seen from the investment side is more companies coming into the space,” Ives said. “People that owned medical office are glad that they do, people who are buying it are saying how expensive it is compared to 12 months ago.”
Cushman & Wakefield in its first quarter report on the medical office market, said that rents were eight cents per square foot higher than they were in the fourth quarter of 2020 and 14 cents higher than a year ago.
The firm predicted that rents would continue to rise.
Interest in medical office products was tepid prior to the COVID epidemic but it has since has become hot property as traditional office and retail spaces struggle, valued for its stability.
In April, a Mission Valley general office building was purchased for $25.3 million with plans to convert it to medical office.
“We have much longer term leases and we have tenants that tend not to move around as much as traditional office,” Ives said.
In the early stages of the pandemic, “medical offices initially did get hit because elective surgeries had to be postponed and offices has to close -- those tenants by and large still paid their rent,” Ives said. “The rent collections for medical office, both locally and nationally, were in the high 90 percentages.”
Working with Ives on the Outpatient Pavilion deal from Cushman & Wakefield’s Healthcare Capital Markets Team were Gino Lollio, and Scott Neidergang based in Chicago and Joe Zurek, director with the firm’s Healthcare Advisory Practice based in San Diego.