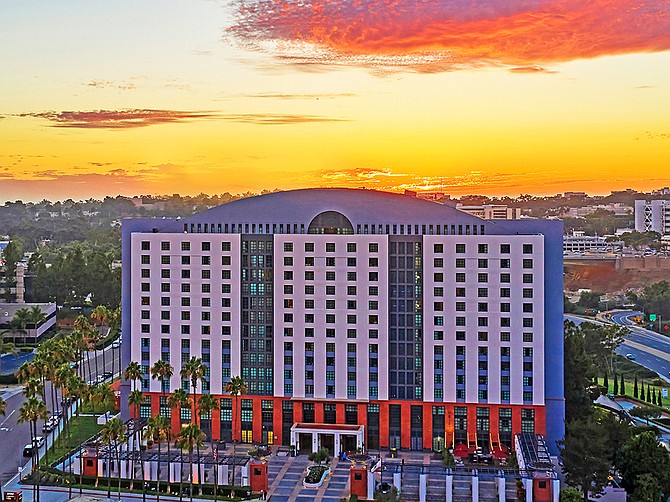 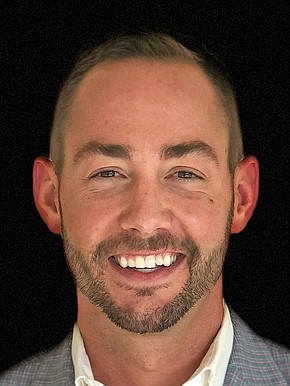 Opened in 1989 at 3777 La Jolla Village Drive, the 16-story hotel “was ready for a rebirth from the interior to the exterior,” said Ben Fairchild, sales and marketing director.
“We really wanted to create an entertaining and casual atmosphere that was more reflective of the Southern California location,” Fairchild said. “It was the right time to do that to deliver something new that guests could experience and cherish and talk about for a long time.”
Designed by Looney & Associates with offices in Dallas, Chicago and Honolulu, the renovation started on the exterior with a new color scheme of what Fairchild described as “coastal gray” and white to replace the earthy tan and terracotta of the original structure.
The design was “inspired by the temporal moments where the waters of the Pacific meet the coastal shore embraced by architecture,” according to Looney & Associates.

Inspired by La Jolla Cove
Upon entering, people will see a completely redone lobby with a marble and wood front desk that is separated into two-segments in front of a wall of slated white oak wood panels with opal glass sconces framing the desk.
“By opening up the lobby and infusing a welcoming, casual atmosphere reflective of the locale, the essence of the space transforms into an airy and inviting destination,” Looney & Associates said in describing the change.
The color scheme is a mix of white, tan, brown and blue.
The desk was moved forward from where the old front desk was to make it more visible and accessible, Fairchild said.
Columns that weren’t load bearing were removed to give the lobby a more open feel and the furniture was replaced with plug and play pieces.
A new and larger Market La Jolla of about 500 square feet was added adjacent to the lobby, with quick breakfast offerings and gelato.
There was a market before the renovation, but it was small and people were lining up to get in, Fairchild said.
A Shor restaurant is slated to open in the summer with traditional breakfast dishes.
The lobby flooring and the flooring in the Regency Foyer off the lobby also was replaced with limestone porcelain tiles.
Bookshelves of natural walnut, metal and colored glass were added to the lobby to create a mini-library stocked with books on the surrounding area, surfing, California beach culture, and architecture.
The library has already been a hit with visitors, Fairchild said.
The lobby color scheme was inspired by the colors of La Cove Beach at dusk.

Guest Rooms
“The concept for the interior is merging the balance of architecture with nature,” according to Looney & Associates.
New furnishings were added to all of the hotel’s 416 guest rooms, which include four VIP suites of 1,000 to 1,400 square feet and 12 studio suites of 650 square feet.
The rooms themselves were renovated in 2015 with new carpeting and mosaic tiles, Fairchild said.
“This updated the design to match the new experience in the lobby,” Fairchild said.
Ten custom glass chandeliers were added in the Regency Ballroom, backed by sconces with LED lighting that can change colors to match a particular event – perhaps the dresses of bridesmaids at a wedding reception, Fairchild said.
The chandeliers themselves are designed to resemble floating flower petals, Fairchild said.
A garden outside of the La Jolla Ballroom was updated with new plants that are more drought resistant.

Timing
The hotel was acquired in July 2019 by Gaw Capital Partners based in Hong Kong for $136 million as part of a two-building portfolio, according to CoStar, a real estate research firm.
“They saw a lot of potential to enhance the current building and as consumer behaviors change and continue to evolve and as we welcome guests back after the COVID-19 pandemic, there’s different expectations from what they (guests) want to see with the product,” Fairchild said. “It was the right time.”
Like most hotels, the Hyatt Regency La Jolla had a rough ride in the early days of the pandemic. The hotel shut down in April and May 2020.
Since then, traffic has steadily increased, especially among people traveling for leisure.
March was strong with Spring Break vacationers and the hotel was sold out for Memorial Day weekend.
“What we’re starting to see is a return of the business traveler and group traveler kind of tied in with the state reopening,” Fairchild said. “We’re starting to see a return of all segments.”