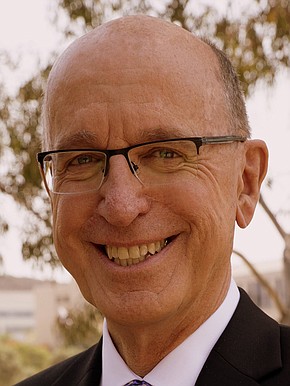 “Businesses suffered through the pandemic last year and business confidence dropped significantly,” said Jim Hamerly, Ph.D., dean of the college of business. “We were pleasantly surprised to see it recover this spring.”
A group of business administration students conducts the survey, asking businesses how they feel about conditions in the next six months. This semester the students received 128 responses from the general business population. Not all businesses shared their locations, but of those who did, 70% reported being in North County while almost all others reported being in the central part of the county.
In conjunction with the project, students surveyed leaders in three vertical markets that are very important to the local economy: Craft Brewing; Tourism and Hospitality; and Biotechnology and Medical Devices. Results of those surveys are presented on the following pages.
In addition, business leaders were polled on changes they made due to the coronavirus pandemic.

Looking Toward a Turnaround
Businesses responding to the survey generally said they see better times coming. Roughly two-thirds or 69% said they expected their businesses to be back to pre-pandemic levels within a two-year window.
There were a lucky few who said their businesses actually grew during the pandemic. Some 15% of all survey respondents reported growth.
Some 11.5% of businesses said they felt business would return to normal in fewer than six months.
The largest group of respondents — some 37% — are looking toward the fourth quarter of 2021 and the first quarter of 2022; specifically, they said they expected their businesses to return to pre-pandemic levels in six to 12 months. An additional 23% said they saw a recovery to pre-pandemic levels in 12 to 24 months, while 9.7% said they expected a recovery in more than two years. Four businesses in total, making up 3.5% of the responses, said they felt that they would never recover.
Feeling Good
A central component of the survey results is a Business Confidence Index. Survey authors use data they collect in each of the four surveys to calculate a numerical score for each index. Scores range from 0 to 100, with 50 being neutral and greater than 50 being optimistic about the economy.
In the spring of 2021, the General Business Confidence Index hit a record high of 80.96, up dramatically from 59.78 in spring 2020, which indicated a more neutral mood. The index from fall 2020 was 64.91.
Over the five years of the springtime survey, optimism has prevailed.
Roughly three out of four businesses said they expect their revenue to increase during the next six months. Only 5% said they expected it to decrease. Some 71% said they expected profits to increase in the next six months, again, with 5% predicting a decrease.
More than half of businesses — some 57% — said they planned to increase the number of employees, with another 38% saying employment would remain the same.
Three out of four respondents said they had changed their business strategy since the arrival of the pandemic, and 73% said they adopted new technologies in response to the event.
Respondents said they had adopted videoconferencing technology, with one out of four using Zoom and another 7.4% using Microsoft Teams.
Nearly 15% said they had begun working remotely. Some 5% said they had taken up e-commerce and 1% said they had implemented curbside pickup.
A team of five students under the direction of Qi Sun, Ph.D. distributed their survey to more than 1,800 businesses in the region, and then compiled results. The students were Leah Richards, Kassidy Sellin, Emily Evans, Tala Kojok and Mena Samaan. The five conducted the survey as part of their participation in CSUSM’s Senior Experience Program.
Find more news from the Spring 2021 CSUSM Business Confidence Index here.