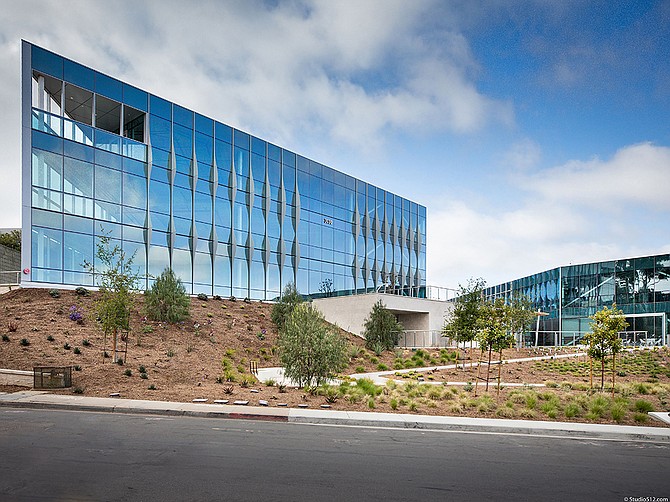 A $100 million renovation of a Torrey Pines life science campus was recently completed. Photo courtesy of The RMR Group. 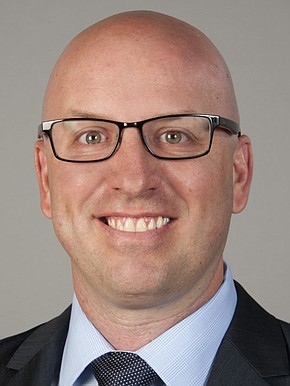 “What we have is completely new, class A buildings,” said Chris Bilotto, senior vice president of The RMR Group.
The campus at 3030, 3040 and 3050 Science Park Road is owned by Diversified Healthcare Trust based in Newton, MA and managed by The RMR Group, which also is based in Newton with regional offices in San Diego.
Ferguson Pape Baldwin architects based in Kearny Mesa designed the renovation. The general contractor was Rudolph and Sletten General Contractors & Engineers based in downtown San Diego.

Historic Demand
The newly renovated Muse campus was 85% leased the day the renovation was finished - testimony to the ongoing demand for life science space in the Torrey Pines/UTC submarkets.
“In Torrey Pines in general, there’s high demand to be in that area, to be part of that cluster,” Bilotto said. “In most cases, we had multiple tenants looking at the same space, which is a great position to be in.”
Sugarlign Spine Technologies has leased the entire 94,500 square-foot building at 3030 Science Park as its corporate headquarters.
Others leasing space in Muse are Organogenesis which signed a 23,000 square-foot lease in 3040 Science Park Road and Aegis Life, which leased 9,600 square-feet in the same building.
The Urban Kitchen Group based in Bankers Hill will operate a restaurant on the Muse campus.
San Diego had a record year for the life science commercial real estate market in 2020, according to the commercial real estate brokerage JLL, with 92 completed lease transactions covering more than 2.2 million square feet.
“That momentum has carried into the first quarter of 2021, with the quarter producing 33 completed transactions that accounted for 758,160 square feet of total square feet leased,” JLL reported. “Total leasing volume during the first quarter was 67%  higher than the previous quarter, 221% higher than activity from the first quarter of 2020 and an increase of 188% from the first quarter five-year trailing average.”
Robust demand pushed the amount of available space to historic lows, according to JLL.
“Torrey Pines led all submarkets in leasing activity with 13 completed transactions totaling 298,564 square feet,” JLL reported.

A New Look
The three buildings that make up the Muse campus are atop a hillside in the middle of San Diego’s life science cluster and the renovation took advantage of the site by creating a large outdoor common seating and dining area.
“The topography really allowed us to create some interesting seating areas throughout the campus,” Bilotto said.
The exteriors of the buildings are largely glass with fins and other design elements meant to resemble the double helix structure formed by the double-stranded molecules of nucleic acids.
“We got creative with how we added fins to the building to be representative of the helix and how that ultimately changed the look and feel of the buildings to be more consistent with the life sciences,” Bilotto said.
The two-story 3040 Science Park Road is the amenity building with the restaurant that opens out into a courtyard, a fitness center, locker rooms and bike storage and a training room.
“The restaurant has cantilevered doors on both sides of the face that open into the common area. It turns into a real open, food destination that’s seamless between the interior and outdoor common area,” Bilotto said.
Although the renovation came in the midst of the COVID pandemic, Bilotto said “it had no impact overall.”
“I would say we were on time with our projections,” Bilotto said. “The fact that we were able to deliver on time was really a testament to how everyone came together.”