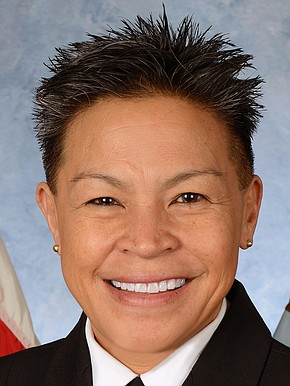 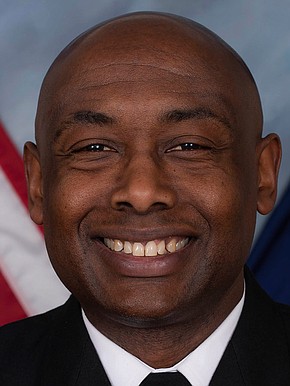 Barnett may be familiar to some in San Diego, as he served for a time as commander of Naval Base Coronado.
Rear Adm. Bette Bolivar took the Navy mayor’s job in 2019. She is a U.S. Naval Academy graduate who went on to become a special operations officer, specializing in explosive ordnance disposal as well as diving and salvage.

A Pioneer
A profile published by the U.S. Naval Institute, a media outlet not connected to the Navy, called Bolivar a pioneer. She was one of the first women to be part of the Navy diving community and one of the first Filipino Americans to graduate from the Naval Academy.
The profile also noted that Bolivar had a fear of the sea after a near-drowning incident in childhood. She set out to overcome her fears. Her degree from the Naval Academy, incidentally, was in oceanography.
Bolivar had another brush with history, according to the Navy magazine All Hands. She served as the director of ammunition offload from USS Cole after terrorists blew a hole in the ship’s side in Yemen.
Her flag officer assignments include commander, Navy Region Northwest and commander Joint Region Marianas, where she also served as U.S. Pacific Command/defense representative Guam-Commonwealth of the Northern Mariana Islands-Federated States of Micronesia-Republic of Palau; commander, U.S. Naval Forces Marianas; and commander, Task Force West. During her career she also served as commander, Navy Region Southeast.
Bolivar was officer in charge of the Counter Radio-Controlled Improvised Explosive Device (IED) Electronic Warfare program while deployed to Afghanistan in support of Operation Enduring Freedom’s counter IED task force, Task Force Paladin.

Aviation Background
Rear Adm. Stephen Barnett comes to San Diego after serving as commander, Navy Region Northwest in Washington state. Barnett was recently awarded the Legion of Merit gold star for his accomplishments in the Pacific Northwest, which included overseeing the Navy’s regional efforts responding to the coronavirus pandemic.
A native of Columbia, Tennessee, Barnett is an alumnus of Tennessee State University, where he received his bachelor of science in mechanical engineering, and Troy State University where he earned his MBA. He earned his commission at Aviation Officer Candidate School in 1991.
At sea, Barnett reported to Patrol Squadron (VP) 46 stationed at Naval Air Station (NAS) Whidbey Island, Washington as a naval flight officer. He has also served as the operations department administration officer onboard the aircraft carrier USS John C. Stennis, and served as a department head for VP-5 stationed at NAS Jacksonville, Florida. As commanding officer of VP-47 stationed at Kaneohe, Hawaii, he led the squadron on a simultaneous deployment to Japan and Iraq, executing more than 250 missions in support of Operation Iraqi Freedom. During his tour, the squadron completed more than 950 sorties comprising 5,000 hours.