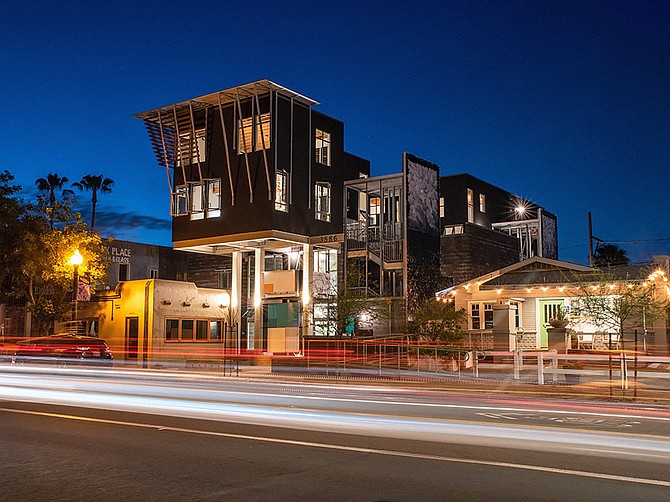 Photo courtesy of Philipp Scholz Rittermann and Evgeny Yorobe The Orchid Apartment complex in Normal Heights has drawn attention for its distinctive design. 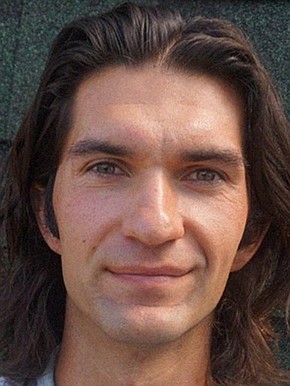 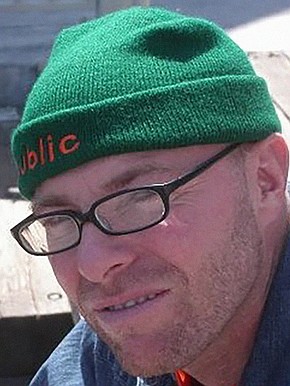 In an ironic turn of sorts, the Orchid, as the complex has been named by its developer, Ben Longwell, has been nominated for a 2021 orchid award from the San Diego Architectural Foundation as an example of outstanding architecture.
The Orchid building also was nominated for an onion in the foundation’s annual award competition by a critic who likened it to “an Eastern bloc prison complex.”
The Orchid apartments takes its name from a former hair salon of the same name that dates back to the 1930s or 1940s and has been incorporated into the new project as a take-out restaurant, renamed Wildflour.

Art
The apartments are studio lofts with 18-foot ceilings and large windows and interlocking courtyards.
Every apartment has a private outdoor space – a patio, deck, balcony, or yard – and some have more than one.
The front of the building juts out toward the street on the second level, creating a shaded public courtyard below it and in front of the former salon.
The project features murals by a local artist, Tatiana Ortiz-Rubio, and metal art installations by Michael James Armstrong.
Longwell said he also commissioned 14 water color paintings of orchids by Andrew Alcasid, one painting for each apartment. The paintings were on display in the apartments before they were leased and Longfellow said he plans to bring them back to the complex as permanent installations.

Experimenting
Longwell declined to say what the monthly rents are nor would he give the size of the apartments, are preferring to let likely residents discover the space on their own with no preconceived notions on the roominess of the units.
“I really want people to get inside the spaces and kind of use their intuition,” Longwell said.
All the apartments have an open floor plan, except for the bathrooms, with spiral staircases leading up to the lofts, Longwell said.
Jim Brown, principal of Public Architecture and Planning, said the project was especially challenging because it’s on a small lot – about 7,000 square feet.
Brown described the look of the Orchid as contemporary and said he didn’t go into the project with a clear idea on what the final product would look like.
“When I design something, it’s not so much that I’m going for something,” Brown said. “Some of the art in the world that influenced my design is the Dada art movement of the 1920s, based on experimentation and allowing accidents to happen.”
Longwell said he formed The Society of Master Craftsman while traveling in a van with his wife and dog after becoming disenchanted with what he felt were profit-driven developments popping up in San Diego’s more charming neighborhoods.
“I want to build buildings one at a time that pay the utmost attention to art and craft,” Longwell said.
In the case of Orchid, some of the apartments have lots of exposed concrete block and concrete flooring to give them an industrial feel and others have Maplewood floors and painted walls. Longwell said. Most have exposed beams and pine tongue-and-groove ceilings.
Longwood said that The Orchid apartments is his second project. He said his first was Exotic Gardens, an apartment across the street from The Lafayette Hotel on El Cajon Boulevard that was named for a nursery that was once on the site.