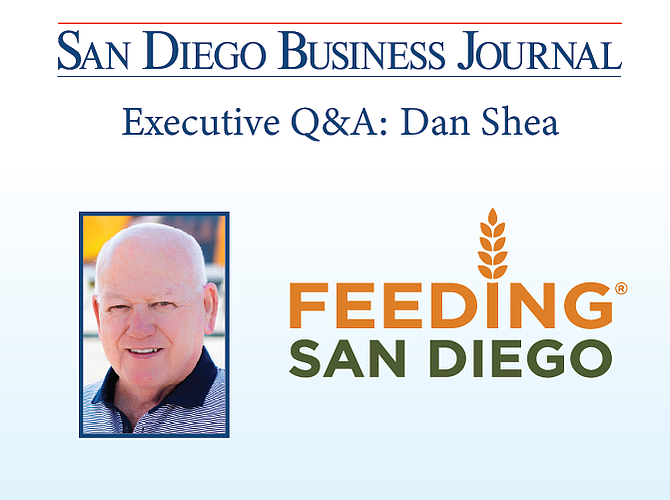 According to the San Diego Hunger Coalition, more than one million people in San Diego County are at risk of experiencing hunger and this number includes more than 284,000 children.

Shea sees his business and philanthropic experiences as a plus because he is able to bridge two worlds.

He is passionate about the mission and the San Diego Business Journal recently had a chance to talk to Shea.

What drew you to want to lead Feeding San Diego?
I believe access to nutritious food is a basic human right. Leading an organization that provides much needed food assistance to anyone in need is a role that called out to me. After working in the hospitality industry for so many years, including restaurants, it’s a privilege to transition to the nonprofit world and lead an organization as reputable as Feeding San Diego. As a member of the Feeding America network, Feeding San Diego is uniquely poised to leverage the infrastructure built by the country’s largest hunger relief organization and use its hyperlocal network to create lasting change in the community.

How best would you describe your style of leadership?
It’s in my best interest to empower my team to do their jobs with what they bring individually to each role. I believe that a person is hired for a position because they’re the best person to do that job and a true expert. I let them do their job. I want to give our team the ability to spread their wings not under me, but with me.

What is your perspective on “volunteering?”
Volunteering can extend to actions much further beyond what you might think. I envision a small army of volunteers across all areas.  At Feeding San Diego, volunteers are absolutely essential. We rely greatly on volunteers to glean produce at our warehouse as well as pack up and load food into people’s cars for all of our large scale drive-through food distributions across the county. This is essential.  As we set our strategic plan with the mission of closing the hunger gap here in San Diego we are in need of additional volunteers that have expertise in certain areas of business or leadership skills. For example, volunteer Doug Clemmans, formerly an executive at Salesforce and Oracle, has volunteered his time over the past year to help us analyze how we use technology within our organization to make our operations more efficient and reduce costs. His expertise has saved the organization substantial costs. We need people to research in the areas of logistics, finance, accounting, you name it. Our virtual army of volunteers can work with us from their office or home. Closing the meal gap will take vast resources, and our volunteers will help us get there.

You believe in collaboration, especially after COVID-19. What does that mean for Feeding San Diego?
It means that you’ll see our organization working together with a lot of other people and nonprofit organizations in the coming months in a variety of ways. As a community, we know that we are in this together, and as an organization we are better working together with other inspiring thought leaders and agents of change in our community. By forging strategic alliances with the great people in our community who have complementary missions, we can create an even bigger impact. For example, Feeding San Diego and the San Diego Food Bank are two separate organizations working together to help end hunger in our community. I always like to give this example. It’s not a competition like Coke and Pepsi where they fight each other to catch 1% advantage of the market. We are not a competitor but a collaborator. We all need to work together for the good of the community. It doesn’t do the community any good if we are double feeding one zip code and underserving others. We are putting a strong focus on collaboration across the county to achieve our mission of a hunger free and healthy San Diego.

What do you mean when you state it is better to “aim high and miss?”
I believe it’s better to set highly ambitious goals and not achieve them than to stay comfortable. It’s my version of a growth mindset. Our organization has created a strategic plan that is very aspirational. We could have stuck with a plan that set lower expectations and know resolutely that we would meet it, but we’re trying to level up. To me, this strategy provides the vision needed to get to that next level. By aiming higher, we will do way better.  Even if we do not hit the stated goal, we would do better than if we aimed low.

How do you believe your business background helps Feeding San Diego?
A nonprofit is uniquely different than a for-profit business, but at the end of the day, it needs to be run like a business. Having a business background is an asset coming into this role. Typically, CEOs of food banks have spent their whole career in food banking or a similar mission-based organization. Coming in with not just business experience but also philanthropic experience, having served on the boards of several San Diego-based organizations, I can help bridge the two worlds. Even nonprofits have to understand that although profit is not the motive, cost containment, principles of revenue generation and best business practices means you end up with more money to put towards achieving your mission.

Overall, how do you think COVID-19 has helped bring awareness to food insecurity in San Diego County?
Our community truly rallied behind Feeding San Diego throughout this pandemic. When the lines at our food distributions were at their longest, media coverage shined a light on this new and unprecedented need for food assistance. In turn, the community sprang into action. The pandemic truly showed each and every person how vulnerable we can be. Food is such a basic, essential need that when lives were upended and the economy was in a downturn, people could relate to it. It became easier to picture yourself as that neighbor in need, waiting in line for food. The truth is, food insecurity was an issue in San Diego County and will remain one long after the pandemic has become a distant memory. A global public health crisis was a sure way to remind people of the struggles that people face in San Diego, and that’s a positive thing so we can all approach ending hunger with more empathy.

As the region recovers and reopens, there still is a lot of hardship. How can the business community help?
There is absolutely still a lot of hardship right here in San Diego, with a number of cities disproportionally affected by the economic downturn caused by the pandemic. It will take much longer for certain groups of people to recover, and they’ll still face many of the same challenges that cause food insecurity to begin with. The local business community can be a stakeholder in our mission by volunteering – we do have the Teams for Good program for companies who want to volunteer as a group. The local business community can also get involved by participating in a corporate benefit campaign. We have so many companies that have done fantastic campaigns in the past that inspire the local community to shop and support. There’s also employee fundraising, the matching gift program and corporate gifts and sponsorship.

Is there anything else you would like to add?
I am absolutely amazed at the people that came out of the woodwork to help others in need without solicitations during the pandemic. Those people stepped up to help their neighbors. Many of those neighbors, if not most of them, had never had to ask for assistance before. We knew that this new population facing hunger would eventually be back on their feet after the public health crisis subsided, and it was up to us to provide assistance for them during their time in need. It was our turn to help them, there was no loss of dignity. We know they will be back to helping others when the time comes.
* * *
Dan Shea
Dan Shea was born and raised in the rural Illinois village of Okawville, and is one of eight siblings. Growing up in a poor family, Dan looked up to his dad for his honesty, humor, and sympathy for those even less privileged than them, “In my life, wanting to help others came from my dad.” Today, Dan resides in Rancho Santa Fe, California, and serves as the CEO of Feeding San Diego, a leading food rescue and hunger-relief organization in San Diego County. Dan is also a partner of Paradigm Investment Group, which owns approximately 120 restaurants in 11 states in the United States.

After graduating from high school, he joined the Army. Dan received an Honorable Discharge and used the GI Bill to attend Southern Illinois University where he majored in Economics. His first job after college was at Stouffer’s – a large hospitality company. In the two years that Shea worked there, he learned that despite having valuable contributions to offer, his opinions often went unheard and so, he decided to quit. His move left him out of money, out of prospects, and living in his car for a brief period of time.

Eventually, Shea managed to land a job as a junior executive with DeLorean Motor Company where he remained for five years. During his time with DeLorean, Shea built up an industry network and went on to become a regional manager for Mitsubishi, which was then moving into the U.S. market. Dan was a go-getter and worked long hours, jumping from wholesaler to retailer within a few years. In 1991 Dan began a consulting business specializing in assisting businesses with financial and operational restructuring. Through this process, he became an equity partner of one of his clients, and three years later, the business was acquired by a Fortune 500 company. At 43, Shea retired for one year, which he describes as the most boring year of his life, and his partnership with Paradigm Investment Group began with the purchase of five restaurants in Texas.

Dan is an activist for many social justice issues, and for the past four years, he has partnered with Peter Seidler, the majority owner of the San Diego Padres, and several business and civic leaders in the community to tackle San Diego’s homeless problem. Their efforts have resulted in the placement of four industrial tent shelters throughout the city housing unsheltered individuals. He continues his efforts on assisting people facing homelessness, and he, along with Seidler and others, are currently pushing for the utilization of vacant city and county-owned properties to house the unsheltered, including the 1,500 Transitioning Aged Youth in San Diego. A petition drive to influence political leaders has been launched to urge the city to utilize vacant buildings for homeless shelter and services. So far, the number of petitions signed and sent to leadership is in the thousands and growing.

To donate or get involved, visit feedingsandiego.org