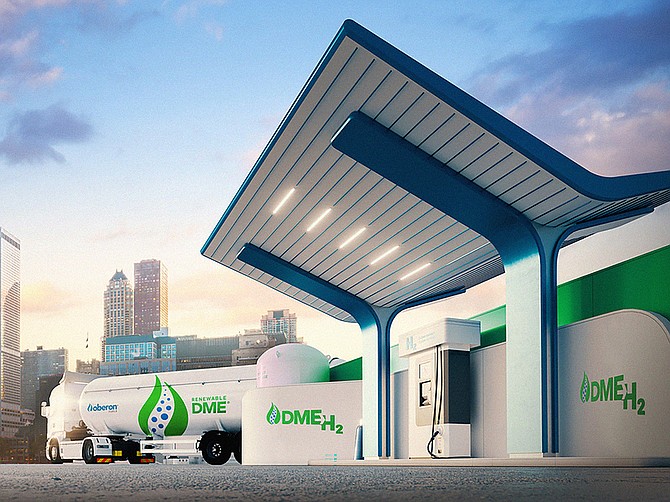 Rendering courtesy of Oberon Fuels An artist’s rendering shows how the hydrogen filling station of the future might look if it uses technology jointly being developed by Oberon Fuels and Los Alamos National Laboratory. 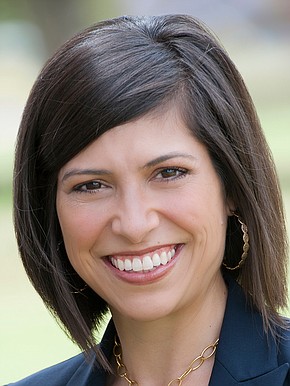 Rather than transport hydrogen to the corner fuel station for distribution, the joint Oberon-Los Alamos effort seeks to build technology that would let a fuel retailer transport DME to a filling station and store it onsite. Once a customer arrives, the retailer can convert DME to hydrogen on the spot.In its pure form, hydrogen can be tricky to move around, said Rebecca Boudreaux, president and CEO of Oberon Fuels. By contrast, DME is a “great way to move hydrogen without the transport challenges.”
The process of transporting and handling DME is similar to that used for propane gas.
In a statement, Oberon said that DME has the potential to overcome the two largest barriers to widespread hydrogen adoption: the lack of cost-competitive, sustainable production and lack of energy-dense storage and transport.

Scaling Up
The fuel conversion process has worked in the lab in New Mexico. Originally the partners produced 0.018 kilograms (0.63 ounce) per day using a steam reforming process in a controlled environment.
The partners are working to produce 25 kilograms (55 pounds) of hydrogen per day. Within the next two years, the partners hope to reach 500 kilograms per day, Boudreaux said. That translates to 1,100 pounds, or slightly more than half a ton. That would be more than what an average hydrogen filling station currently uses for light-duty vehicles.
Boudreaux said equipment stored in a building the size of a shipping container could convert the DME to hydrogen. The process involves heating the DME and adding a catalyst to release the hydrogen molecules, which are then put through a purification process.
The effort is funded by the Energy Department’s Technology Commercialization Fund, which supports mature, promising energy technologies with the potential for high impact. It is also part of an initiative the federal agency calls H2@Scale, to accelerate the development of a hydrogen economy by funding advanced-technology research, development and demonstration with industrial partners.

Going Commercial in Brawley
As part of a $6 million project, Oberon has been converting waste methanol (wood alcohol) into DME at its facility in Brawley. The project is funded in part by a grant from the California Energy Commission.
Oberon’s plant uses leftover material from the paper-making process as its feedstock, or starting point for the DME fuel. It has been importing the feedstock from Canada. There are more than 140 kraft pulp mills in Alberta.
The business announced in June that it began producing DME on a commercial scale.
Oberon has patents on its technology and “an extensive amount of know-how,” Boudreaux said in an October interview. The manufacturing process is protected with trade secrets.
Oberon has spoken about plans to make dimethyl ether from the food waste, agricultural waste and dairy manure.
In other news, Oberon is working with an unnamed U.S. transit agency on a pilot project to run propane-powered buses on a blend of propane and DME. Five buses will test the fuel for six months.
Suburban Propane (NYSE: SPH) announced in September that it took a 39% stake in Oberon Fuels. Financial terms of the deal were not disclosed.