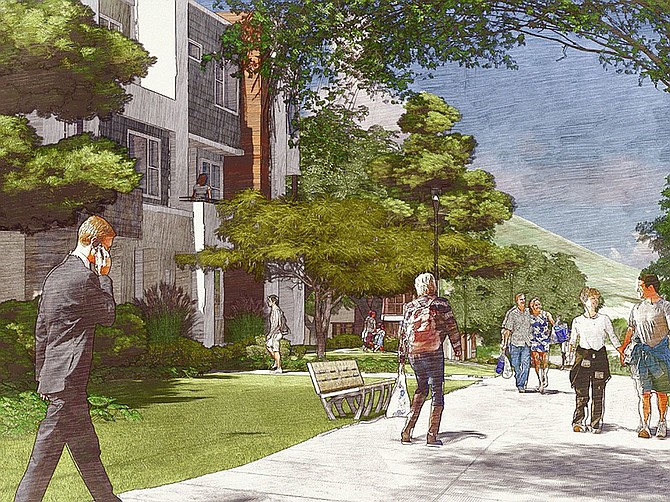 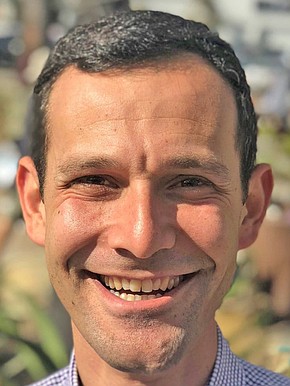 The golf course, the former Carmel Mountain Ranch Country Club, closed in 2018, and the property was acquired by New Urban West, Inc.
“It is abandoned, fallow, and fenced,” said Jonathan Frankel, project manager on behalf of New Urban West. “It is not being used for any beneficial purpose. It has become quite the eyesore.”
New Urban West declined to disclose how much it paid for the golf course.
Construction of The Trails at Carmel Mountain is scheduled to begin in summer 2022 with the first townhomes slated to go on sale in summer 2023.

An Infill project
The company initially proposed a project of 1,600 units, but trimmed it to 1,200 to be more compatible with the surrounding neighborhood, Frankel said.
“The golf course is really kind of interspersed through the entirety of this community and actually served to disconnect the neighbors and the neighborhoods,” Frankel said.
The development that will replace it will weave through the property, much as the golf course did.
A greenbelt surrounding the new community will separate it from existing housing.
Ranging from 1,400 square feet to 1,900 square feet, the townhomes have tentatively been priced at from about the mid-$600,000 to the low $800,000’s, Frankel said.
The apartments will be a mix of one-bedroom, two-bedroom, and three-bedroom units ranging from about 650 square feet to about 1,200 square feet.
Monthly rents have yet to be determined for the market-rate apartments. The apartments will be in the central area of the project, the northeast portion, and the southwest corner.
Frankel said 15% of the units – 180 - will be deed-restricted as affordable, leased to renters earning up to 60% of the area median income.
That equates to $50,840 annually for one person, $58,180 for households of two, $65,480 for households of three, and $72,720 for households of four.
“There is no affordable housing in this community today, zero. This is a major improvement in our minds in allowing people who work in this area, a very rich jobs environment, to live closer to where they work,” Frankel said. “This is exactly where we need to place new housing consistent with the city’s objectives. This is a true infill project. It is surrounded by existing housing, roads, and services.”

Rising Demand
The old golf cart paths will be turned into 6.5 miles of trails.
“There’s not another community that has this type of contiguous bike and trail network,” Frankel said.
About 70% of the property will be maintained as open space.
“Open space is the primary use of this property,” Frankel said.
As a private golf course, the property was only open to people who paid to play, Frankel said, adding that “We are opening it up to everyone, to all existing residents, at no cost.”
Buyers and tenants will likely be “a diverse mix of folks,” Frankel said.
“We’re really trying to provide an opportunity for families at all stages as well as people who are looking to downsize,” Frankel said. “The units tend to be a little bit smaller and they are multi-family product that can be delivered at a lower price point, affordable to young families and those seeking an initial toehold in the San Diego real estate market.”
Demand for new homes has reached unprecedented levels this year, pushing prices ever higher with the likelihood that the supply of housing will remain tight and prices continue to rise.
The North San Diego County Realtors, a real estate group whose members cover all of San Diego County, reported that the median selling price of single-family homes in June reached $960,000, up from $699,900 .in June 2020, although the group's president, Nancy Layne, said the June figures for single-family homes might have been skewed by a few high-priced sales.
Similarly, the median selling price of townhomes and condominiums in June was $589,000 compared to $495,000 a year ago, according to North San Diego County Realtors.
Putting pressure on pricing was a declining inventory of homes on the market – 1,104 in June 2021 compared to 2,407 in June 2020, the Realtors group reported.