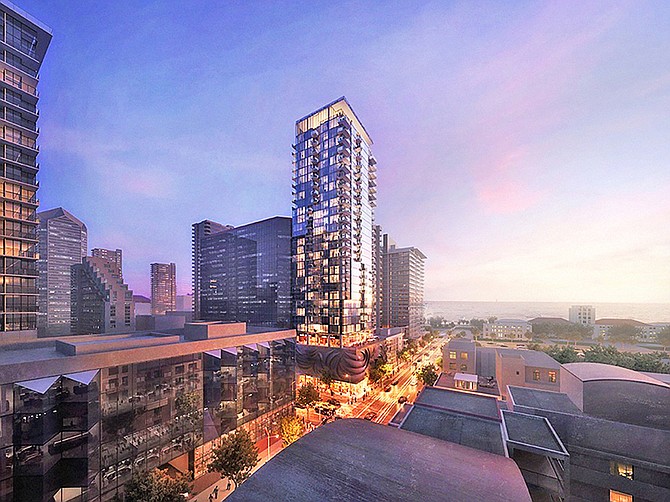 A $150 million apartment tower planned for Little Italy will be the first of several workforce housing projects to come from a partnership formed by Forge Development Partners of San Francisco and the architectural firm Gensler.

The 34-story, 329-foot-tall building at 601 W. Beech St. at India Street is meant to serve as a model to demonstrate how market-rate housing can be built in urban settings for middle-income tenants without government subsidies.

The goal is to build housing “without apology to the market or quality,” Hannum said.

“This building’s density is an attempt to try to drive down costs for people,” said Doug Zucker, principal at Gensler.

The project will include at least 20 apartments designated as affordable for low income tenants, Hannum said.

The building also will have ground floor retail, which Zucker said could include a restaurant.

Construction is scheduled to start in the third quarter of 2021, Hannum said. Level 10 is the general contractor.

Forge and Gensler are working with Urban Housing Partners in San Diego on the Little Italy project.

The site will include artwork by John Asaro, whose family owned the site since 1934.

Designed to mirror the movement of fish swimming as a nod to Little Italy’s history as the home of San Diego’s tuna fleet, the artwork will screen the parking garage “instead of having a blank façade,” Hannum said.

“It’s a piece of sculpture that specifically relates to the fishing fleet and the experience of living there,” Zucker said.

The project has been in planning stages for more than a year and required several zoning and rule changes to become a reality, Hannum said.

Zoning changes that took effect in 2020 enabled Forge to plan for smaller apartments and a larger number of apartments in the Little Italy project.

“Prior to the changes that went through, we were a luxury high-rise,” Hannum said. “Instead of 300 units of housing, we had 150 very large, very expensive housing units.”

The design also has been tweaked to better fit in with the neighborhood, including moving the front door from India Street to Beech Street, giving it a new address from the original 1460 India St.

In the original design, the vehicles exiting the building would interfere with a bikeway, Zucker said.

“We primarily moved the front door because we had all of our traffic coming onto Beech Street, which is one of the bike avenues that kind of leads to the water,” Zucker said. “We thought that was ridiculous.”

The design philosophy of 601 W. Beech St. is “to deliver a lifestyle, not just square footage,” Hannum said.

“It’s really about the engagement of people inside the building,” Hannum said.

Zucker said the Little Italy project represents a significant shift in outlook that Gensler is promoting.

“The design brief for most kind of apartment and condo projects is creating a container to sleep in. You’re creating a bunch of containers and the building is a collection of those containers,” Zucker said. “The attempt of this building is to rethink that kind of old model and think about a new model where you build a community where people live.”

Rather than view the project as an apartment building, Zucker said to “think of it you have a membership to a club instead of a lease of a box. That’s a very different way to approach design.”

Little Italy is an ideal location because it is such a vibrant neighborhood, Zucker said.

The Forge/Gensler project is meant to appeal to the so-called millennial generation where people “don’t want to have everything within their four walls and wall off the world,” Zucker said. “They really want to be part of the community.”

The building will include a number of environmental-friendly features to foster improved health, including touchless access and filtration systems that deliver fresh air from the outside into every apartment.

“The impact on the environment of 300 units of housing is normally huge and our goal is to make it a positive impact,” Zucker said.

Among other things, the project will use solar water heating panels and treat and reuse waste water for landscaping.

“We recycle everything,” Zucker said.

The building also is designed to prevent air from interior corridors from getting into individual apartments, Hannum said.

The top floor of the building is designed as a place for people gather “so everybody gets big views,” Hannum said.

It will include a 4,354 square-foot roof deck with a pool and lounging areas.

A 1,500 square-foot fitness center is also planned and 4,000 square-feet of storage space.

No design changes were needed because of the pandemic, Hannum said.

“Our model for how our community functions responded extremely well,” Hannum said.

The number of parking spaces is in flux, but Zucker said it would likely be about 200.

“We’re a very transit-first culture,” Hannum said, and the project is a short walk to a trolley station and the Santa Fe Depot.

“You no longer have to have a city full of cars, it just doesn’t work,” Zucker said. “Where cars are is where you want these walkable streets, great environments. This building is trying to push forward with that agenda.”

The Little Italy project is one of four buildings Forge and Gensler are working on as demonstration projects, Zucker said.

The other three are in San Francisco, although Hannum said Forge plans to build more in San Diego.

He wouldn’t say where, other that they will be in urban settings.

“We are very much (urban) core-oriented as a company,” Hannum said.