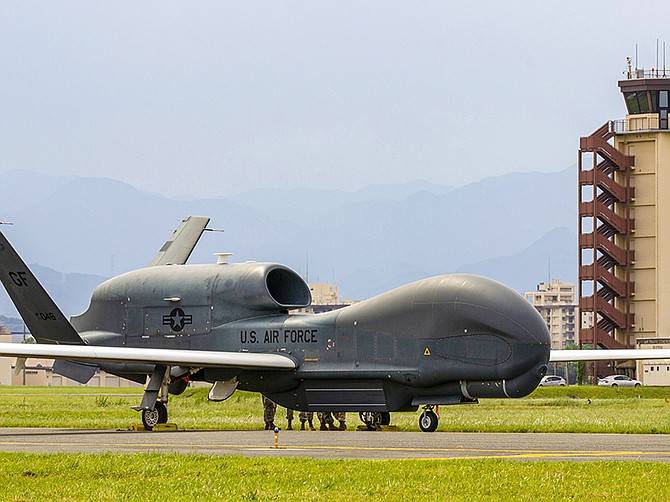 The U.S. Air Force, acting on behalf of the government of Japan, awarded a $37.7 million contract to Northrop Grumman Corp. for the Japan Global Hawk program. The contract provides for the procurement of initial spare parts, to include modifications to the system engineering and program management tasks required to execute, manage, control and report on all program activities.

Global Hawk is an unmanned military aircraft that flies at altitudes of up to 60,000 feet (about 11 miles). It can carry 3,000 pounds of equipment to gather intelligence. It can stay aloft for as long as 34 hours. The aircraft weighs 16 tons at takeoff and is unarmed.

Work will be performed in San Diego — which is home base to Northrop Grumman’s unmanned aircraft programs — and is expected to be complete by June 30, 2023. The contract is the result of a sole source acquisition. The Air Force Life Cycle Management Center at Wright-Patterson Air Force Base in Ohio awarded the contract, announced on Dec. 29.

WEST Gets Nod from Army Corps of Engineers

WEST Consultants Inc., a water resources engineering firm based in Rancho Bernardo, announced several contracts from the U.S. Army Corps of Engineers during the fourth quarter of 2020.

In December, WEST said that its joint venture with MGE received an indefinite delivery type contract from the Corps of Engineers’ Albuquerque District for civil works and hydrology and hydraulics (H&H) design services. The contract has a maximum capacity of $40 million over five years and is primarily for H&H studies and design on flood control and erosion protection projects within the Albuquerque District. The district includes Southern Colorado and Southwest Texas in addition to New Mexico.

In October, WEST announced that it received an indefinite delivery type contract from the Army Corps of Engineers Modeling, Mapping and Consequences (MMC) Production Center in Vicksburg, Mississippi. The deal covers hydraulic and hydrologic engineering services and has a maximum capacity of $5 million over five years. WEST will carry out the work at various locations nationwide.

Also in October, WEST announced that it received a third indefinite delivery type contract, an architect-engineer contract with a maximum capacity of $4.9 million over five years. The deal is with the Corps of Engineers’ Omaha District and takes in professional hydrologic engineering services within the Corps of Engineers’ Northwestern Division. “We our honored that the District has shown its continued confidence in WEST to provide specialized services in support of their mission, especially as relates to the Missouri River and tributaries hydrology, hydraulics and sedimentation issues,” said Martin Teal, president of WEST.

Each has been awarded a one-year indefinite delivery, indefinite quantity contract that could be worth as much as $18.9 million. Contracts also contain four option years that could bring the value of the contracts to $116 million, and push work to December 2025.

The contractors will now wait for task orders.

The contracts were competitively procured via a request for proposal published on the beta.SAM.gov website. Six offers were received and five selected for award. The Naval Information Warfare Center, Pacific of San Diego awarded the contracts, announced on Dec. 11.

A small portion of a U.S. Navy contract modification awarded to Raytheon Co. is going to San Diego. The deal covers production support and integration for the ship-based missile defense radar called AN/SPY-6(V). Less than $1 million of the $82 million deal, announced on Dec. 11, will be spent locally. Work will run through December. The Naval Sea Systems Command of the Washington Navy Yard, D.C. awarded the deal.