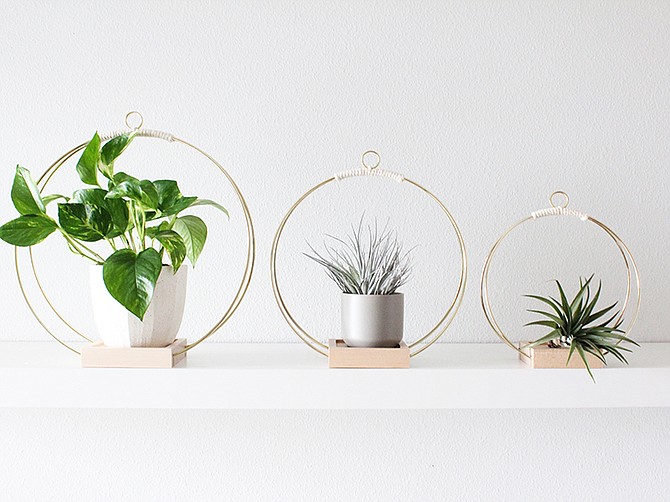 When Jennifer Braidwood founded Braid & Wood Design Studio in 2019, she had no intentions of selling any of her products direct-to-consumers.

But when COVID-19 hit last March and with a number of her almost 200 wholesale accounts temporarily on hold at the time, Braidwood knew she had to make a strategic move to keep the company afloat.

She scrapped together an e-commerce online store and began running Facebook ads to promote the new consumer-facing vertical. Unbeknownst to her, in April, May and June, the Miramar-based manufacturer of wood plant hangers would have its strongest sales months to date as a result, she said.

“When COVID hit, we saw 0% growth for about four weeks,” said Braidwood, who attended San Diego State University and worked doing branding, marketing and public relations for a local nonprofit before launching the design company. “So, we made the decision to open another revenue stream and try our hand at selling direct-to-consumer, who were shopping more online and tackling their own home decorating projects since the pandemic. We went from selling nothing and thinking we had to shut down the company to having some of our biggest months in the history of the company. Our products sold like crazy and, although we had no intention of doing direct-to-consumer, it gave us a glimpse of the potential if we opened that side of the business.”

How It All Started

Braidwood launched Braid & Wood in 2019, initially as a boutique interior design firm, after she and her husband decided they’d leave their high-paying, demanding jobs and pursue their passions. For Braidwood, that meant a career in interior design.

After creating a handmade wood plant hanger for a client and posting it on her Instagram page, Braidwood said she immediately began to garner interest from potential buyers.

“These are so pretty,” said IG user Elizabeth Bear, who runs a design company in Colorado. And, “Do you offer these for wholesale pricing to boutique shops?” commented Jimmy Potter Ceramics, based in Washington, D.C.

“It just sort of caught on fire,” she said. “People started reaching out asking about the product and how they can get their hands on it. I had some retailers reach out to me, including a retailer in St. Louis, Missouri. He said, ‘we want to stock your product in our store. Do you do wholesale?’ I didn’t know what wholesale was then, but I said yes.”

And that’s when Braidwood determined Braid & Wood would sell direct-to-retailers. Within a year, the St. Louis company would become one of the company’s almost 200 wholesale partners, said Braidwood, with Braid & Wood hangers having a presence in midsized boutiques in almost every state across the country, including New York, Alaska and Hawaii, these days. In San Diego alone, Braid & Wood hangers, which come in a handful of designs and sizes, are sold in about half a dozen stores. This includes Small Batch in La Mesa, Solo in Solana Beach, Thread + Seed in South Park and Green Fresh Florals in Hillcrest.

Brittany Pena and Lacy Bird, Co-Owners of Small Batch in La Mesa, said they were inspired to carry Braid & Wood because the designs are modern with clean lines, which fits the store's vibe and aesthetics.

"We wanted to partner with her because she offered a beautiful, high-quality product, " Pena said. "We love that her brand is a local company and female-owned. We strive to support those businesses in our store."

Braidwood said she connected with the bulk of her retail partners via a wholesale platform called Faire as well as through the Las Vegas Market tradeshow, the latter which she attended for the first time last January. During the weeklong event, Braid & Wood won best new home décor product out of 50 finalists, she said, and signed about 45 new retail accounts within five days.

To help meet the combined wholesale and direct-to-consumer demand, Braidwood has since partnered with a San Diego-based wood supplier which manufactures all the bases (before that, Braidwood was producing all the pieces out of her kitchen!). Additionally, Braid & Wood hired a small team and moved to a 1,200 square foot warehouse and fulfillment center in Miramar. At the location, the company stores thousands of its wood bases, she said, as well as pots, organic cords and rings.

This year should be a big growth year for Braid & Wood, with Braidwood projecting the company will increase revenue 4X in 2021. The company is already seeing an uptick in wholesale, she said, as a lot of shops have figured out how to sell online and via curbside as well as social distant instore shopping.

Braid & Wood will also launch a couple new items and fresh colorways in the next few months, Braidwood said, and hopes to enter national retailers like West Elm in the near future.