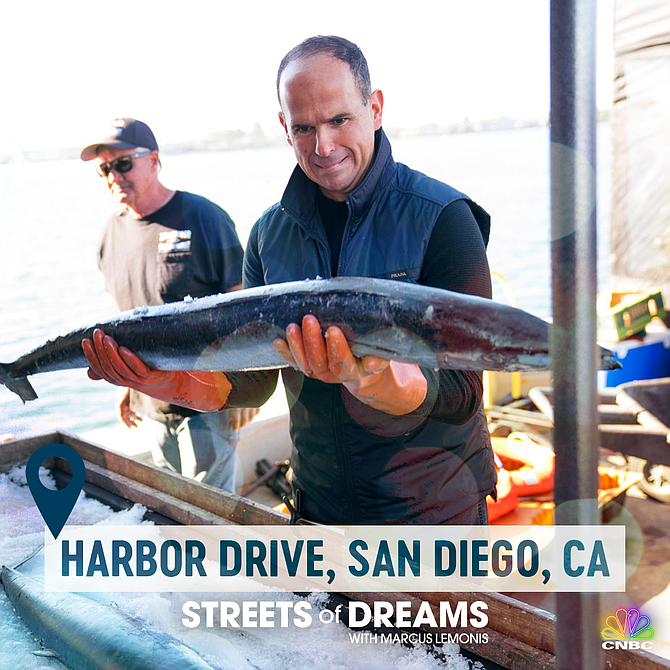 Businessman and television personality Marcus Lemonis gets close to San Diego business in a new episode of "Streets of Dreams." Photo courtesy of CNBC.

In the latest episode of “Streets of Dreams,” Lemonis goes behind the security fences, giving his audience inside views of places that many San Diegans have never set foot in, including the busy production yard of General Dynamics NASSCO and the aircraft carrier USS Abraham Lincoln (technically across the bay at North Island, but still within sight of Harbor Drive).

It is all presented with an economic twist. For example, Lemonis notes that the presence of three aircraft carriers in port generates $2.5 billion in economic impact every year.

The Blue Economy refers to that part of the economy related to the ocean. Also featured in “Streets of Dreams” are the fishing industry, the Port of San Diego and the Surfrider Foundation.

The entire “Streets of Dreams” series — made by the same producers who were behind “Anthony Bourdain: Parts Unknown” — sends Lemonis across the United States to explore the unique business cultures that define America’s most iconic streets and neighborhoods. Lemonis offers a distinct business perspective, since he is chairman and CEO of a major publicly traded company, Illinois-based Camping World Holdings Inc. (NYSE: CWH).

The show airs on CNBC at 7 p.m. Tuesday, Jan. 19. The episode will be available on Amazon after the launch.