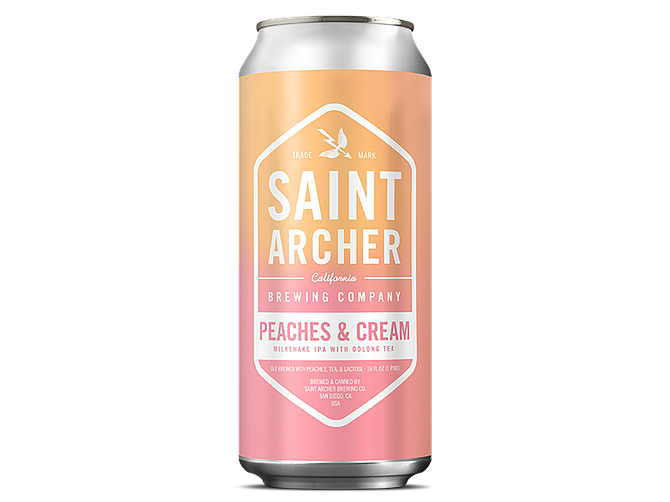 Saint Archer Brewing Co., the Miramar-based brewery acquired by MillerCoors in 2015, is teaming up with local companies to help boost visibility and create additional revenue stream during the pandemic.

As part of its limited “R&D Series”, Saint Archer is collaborating with 12 San Diego-based companies – one each month of 2021 – for the entire year. This month, it has joined forces with Paru Tea Bar for a limited-edition Peaches & Cream Milkshake IPA featuring Paru’s Oolong Tea.

Located in Point Loma, Paru Tea Bar offers high-quality loose-leaf tea sourced from small farms around the world, according to the company. The Peaches & Cream beer is fruit forward with a creamy finish.

Saint Archer Brewhouse and R&D Manager Gregory Garrity got the idea to team up with Paru last September, while sipping on its Taiwanese Milk Oolong Tea at the tea shop.

“It was bursting out of the cup with silky, stone fruit and buttercream aromas and we knew this had to go in the classiest style of beer ever created,” he said. “We accentuated the stone fruit aroma imparted from the tea with fresh peach puree, upped the creaminess with milk sugar and lightly hopped the beer with Mosaic hopps to add a tropical berry twist.”

The Paru Tea Bar partnership has been successful, said Garrity – Saint Archer originally bought 10 pounds of tea and that mix sold out via presales overnight, he said. Now, the brewery plans to purchase more tea to make additional Peaches & Cream product as well as sell the Paru loose-leaf tea alongside the beer at its brewhouses. And, inspired by the rapid sales, Saint Archer plans to continue to sell the limited-edition beverage as long as Paru can continue to supply the tea, according to the company.

“We are truly fired up at the response we’ve received from the community – both consumer and other San Dioego businesses that want to partner with us,” said Brad Nadal, president of Saint Archer Brewing Co. “Bringing fun, new news to our San Diego consumers, but also giving us the opportunity to partner with other local business, combine our like values and brings San Diego a unique taste of both our brands.”

Amy Truong, co-founder of Paru Tea Bar, is equally excited about the collaboration and the outcome; Truong projects a 15% revenue growth over the course of the year as a result of this partnership.

“One of our priorities for 2021 is to align ourselves with local businesses who are interested in diversifying San Diego’s food and beverage scene for the long-term,” Truong said. “I think we are, fortunately, off to a healthy start.”

Garrity was inspired to launch the yearlong limited “R&D Series” last year, shortly after the pandemic emerged. To find its 12 partners, Garrity posted on a Facebook page called “Eating and Drinking San Diego”.

“We didn’t furlough anyone during the pandemic, so, instead of selling pints over the bar or having guests come to the tasting room, we had to package beer and sell it to go to support our employees,” he said. “It was kind of invention by necessity. We had all these beers in tanks and decided to do one-off beers. We aren’t saving the world, we aren’t curing cancer, but we are doing the best we can to provide a sense of normalcy.”

The collaborative beers are presold online via Eventbrite, the event management and ticketing website. The unique creations are promoted on the company’s social media pages, he said, adding that patrons can also come to the Saint Archer breweries, in Miramar and Leucadia, to make a purchase.