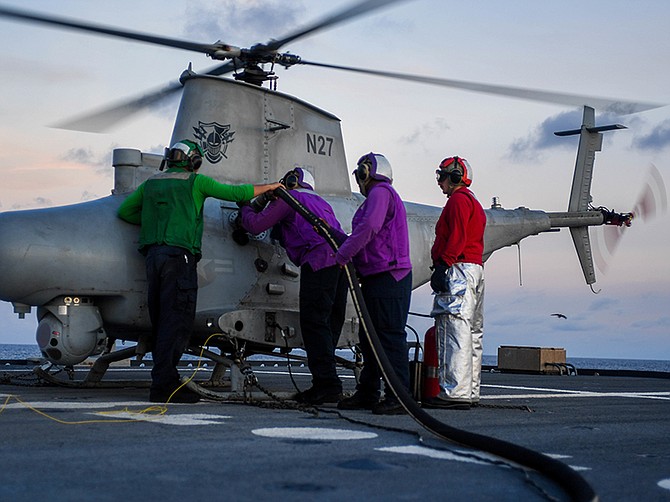 The U.S. Navy awarded Northrop Grumman Corp. a $22.3 million modification to a previously awarded contract for work on one of its unmanned aircraft, the MQ-8 Fire Scout. The modification exercises options to procure software and engineering sustainment services, software support, logistics, cybersecurity and program related engineering.

Work will be performed in San Diego, which is the nucleus of Northrop Grumman’s unmanned aircraft programs.

There are two models of Fire Scout. The MQ-8B is converted from a Schweizer passenger helicopter from Sikorsky and Lockheed Martin. It operates from frigates and littoral combat ships, has endurance greater than five hours, and offers coverage up to 110 nautical miles from its launch site. The aircraft carries cameras, a laser designator and radar to offer intelligence, surveillance and reconnaissance as well as target acquisition.

The MQ-8C is larger. It is converted from a Bell Textron Inc. model 407 passenger helicopter. It has a longer range (150 nautical miles) and can carry payloads as heavy as 700 pounds. It can stay aloft longer as well — 12 hours with a 300 pound payload.

The Navy has flown Fire Scouts equipped for mine detection and has been investigating how to have Fire Scouts deliver weapons.

Work under the recent contract is expected to be completed in December 2021. Some $3.98 million of funds will expire at the end of the current fiscal year. The Naval Air Systems Command of Patuxent River, Maryland awarded the contract, announced on Dec. 18.

The U.S. Navy awarded L3 Technologies Inc.’s Salt Lake City office a $495.5 million contract related to the Next Generation Jammer Low Band program. Some 9% of the program’s work, worth an estimated $44.6 million, will be performed in Carlsbad.

The U.S. Navy awarded DRS Systems Inc. a $10.1 million contract related to its laser-based system that protects helicopters from missiles. Specifically, DRS received a firm-fixed-price, cost-plus-fixed-fee, cost reimbursable delivery order against previously issued basic ordering agreement. The order provides non-recurring engineering for the design, development and integration of the AN/AAQ-45 Distributed Aperture Infrared Countermeasure system, including associated weapons replaceable assemblies in support of the HH-60W aircraft for the Air Force. Some 11% of the work, worth an estimated $1.11 million, will be performed in San Diego. Work is expected to be completed in January 2023. The Naval Air Systems Command of Patuxent River, Maryland, awarded the contract, announced on Dec. 18.

Five small businesses specializing in information technology, hailing from the East Coast and the Midwest, received chances to work on U.S. Navy systems in San Diego and other major Navy installations. Work will run through August 2026.

Each received an indefinite-delivery, indefinite-quantity contract with a maximum amount of $151 million to provide full information technology (IT) lifecycle support to NAVFAC’s core facilities management, construction management and installation management systems. The work to be performed is IT services and solutions through the performance of broad ranges of services across multiple functional areas, including but not limited to, systems development lifecycle support, cybersecurity support, business systems operations and support, IT operations management and enterprise, cloud operations/migration/system development, secure infrastructure and analysis and management services. The winning businesses will now wait for specific task orders.

The terms of the contracts are not to exceed 66 months. The contracts were competitively procured via the Navy Electronic Commerce Online website and Federal Business Opportunities website with 28 proposals received. The NAVFAC Engineering and Expeditionary Warfare Center at Port Hueneme awarded the contracts.