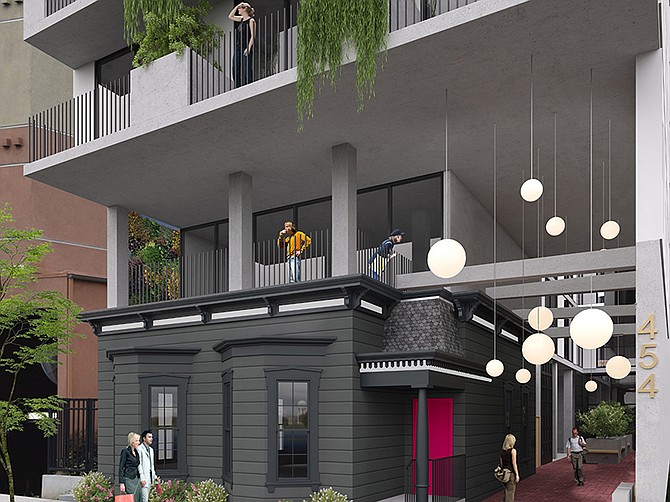 San Diego architect and developer Soheil Nakhshab is building a micro-unit apartment project meant to provide workforce housing on a narrow East Village lot that is a mere 42 feet wide.

“The workforce housing market just doesn’t exist and that’s the problem. We want to be able to give people the ability to live in San Diego and this is how you do it,” Nakhshab said.

The $12 million complex will have 46 apartments and 2,000 square-feet of commercial space in an eight-story building.

The project includes a home that has been designated historic at Nakhshab’s request.

“Most people are very intimidated by historic structures, historic buildings,” Nakhshab said, adding that he likes the idea of preserving the city’s history as part of new projects, blending the old with the new.

With a historic designation, the Nakhshab could either relocate the old structure or incorporate it into the new project.

Working with San Diego’s Save Our Heritage (SOHO) on the design,

Nakhshab chose to incorporate historic elements of the original building into the new project.

“We want to preserve history and show people the evolution of where we were and where we are today,” Nakhshab said.

The original 900 square-foot structure was built in 1888 during a period when railroads were expanding into California.

Part of the building had been remodeled with the rear wall removed, but Nakhshab said he’s restoring the three remaining walls of the old building.

The project is “basically a superstructure that’s hovering over the historic structure,” Nakhshab said. “It’s not something that’s overwhelmed by this new structure.”

The ground level has a breezeway that’s 24-feet tall.

“That volume helps preserve the historic house at a human scale,” Nakhshab said. “The breezeway is almost like a public alleyway so people from the neighborhood can walk through it.”

Tenants have a secure private entrance to the rear of the building.

“Some of the units have private decks. All of the units have built-in furniture and other elements,” Nakhshab said. “We’re trying to take a chapter out of Japanese housing and European apartments where you have a lot of built-in elements.”

Nakhshab said the design also is aimed at providing quiet space for tenants, with concrete floors, concrete walls and metal stud framing with no shared walls.

Nakhshab plans to break up the commercial space, leasing it to a few small businesses rather than a single tenant.

Construction will be finished in February or March.

The project is being built under new city regulations that allow of zero parking spaces in new buildings that are in a transit oriented zone.

Nakhshab’s project is within walking distance of a trolley station.

“Directly on the other side of our block is a main trolley station and to the north, there’s multiple transit lines,” Nakhshab said. “Zero parking lets us just focus on putting up some nice workforce micro-housing.”