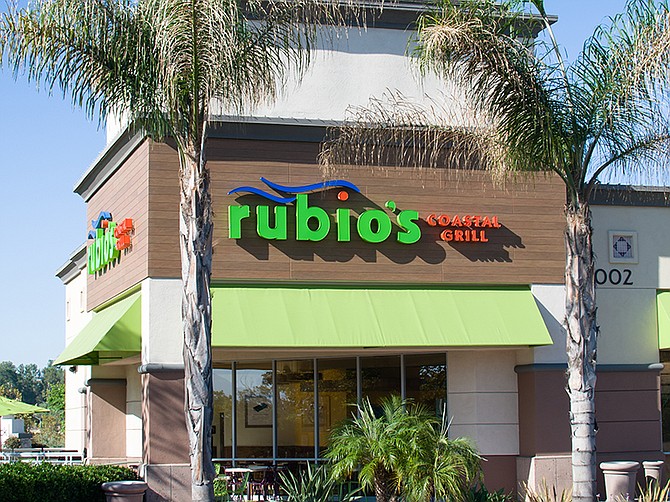 Photo courtesy of Rubio’s Restaurants, Inc. Rubio’s currently has 157 locations in California, Arizona and Nevada. 44 of those locations are in San Diego County.

At the end of last year, Rubio’s Restaurants, doing business as Rubio’s Coastal Grill, exited a Chapter 11 bankruptcy prompted by a downturn in dining caused by COVID-19, according to the company. Chapter 11 allows for the debtor to propose a plan to keep its business alive and pay creditors over time.

The bankruptcy was filed in October 2020 with $82.3 million in outstanding debt. The reorganization plan, approved by the U.S. Bankruptcy Court for the District of Delaware last month, cut that debt by over $35 million.

Now, as the company emerges from the Chapter 11 process with a reduced debt load and a better financial situation, it is moving forward with some strategic growth plans in hopes of capturing new market share.

Patrons of its 157 locations in California, Nevada and Arizona – down from 194, 37 of which shuttered as part of the reorganization –can now have their pick between three new meatless options. Impossible Taco Salad features a signature pickled jalapeno ranch dressing; Impossible Burrito Especial comes with citrus rice, black beans, and guacamole wrapped in a warm flour tortilla; and Impossible California Bowl is made up of citrus rice, guacamole, black beans, romaine lettuce and choice of sauce.

The meat alternative is seasoned with a proprietary blend of Mexican spices made of garlic, pepper, coriander and cumin, according to Rubio. All 44 San Diego restaurants will offer the items, he said.

Signature Blend of Spices and Herbs

“Plant-based eating is getting more and more popular – a lot of us within the company were eating it ourselves. So, we decided, ‘why not take a look at developing a product using Impossible meat and flavor it with our own blend of spices and herbs?’” he said. “We opted to use the ground meat and cook it on a flat grill and top it on a salad, which is our signature product, with fresh Haas avocados, roasted corn, pico de gallo salsa and black beans on a bed of romaine lettuce with fried corn strips to get that crunch. The star of the show is the pickled jalapeno ranch dressing, which has a lot of flavor and brings a nice heat to the meal.”

For Rubio, the goal is that demand for the Impossible Meat items is so great it prompts the company to permanently add them to the menu. While it is too soon to tell what the public response will be, Rubio said he is hopeful the meat substitute will be well-received by Rubio’s regulars as well as draw a new consumer base.

Like many food operators, Rubio’s saw a big dip in March and April due to COVID-19, said Rubio. Thankfully, it launched its digital platform a year prior, which allowed customers to place orders and pay over the phone for contactless pick-up at Rubio’s locations once the pandemic hit. The third-party delivery segment also grew dramatically in response to the lockdown, he said. Both verticals have taken the place of in-store dining in terms of sales, said Rubio.

“We pivoted quickly – kudos to our operators,” he said, adding that sales are in the negative single digits these days. “While a lot of restaurants are down 20%, 30%, even 50% over the prior year, we have stayed pretty close to flat as a result of our fast thinking, which says a lot about our brand and our loyal customers. We don’t even have drive-thru, which would be a huge advantage. But we did have a robust pick-up business before COVID-19.”

While Rubio is optimistic about the company’s future, there are no other growth strategies planned for the rest of this year, he said. As the pandemic plays out and if Rubio’s begins to grow its revenue on a store-to-store basis, that would encourage top-level executives to potentially open more restaurants as early as 2022 and into 2023 as well as consider other strategic growth tactics, said Rubio.

“As COVID starts to wean and God-willing the vaccine is successful,” he said, “I hope we are somewhat back to normal as early as the second part of this year.”

“With a significantly improved balance sheet, new long-term financing and a seasoned management team, Rubio’s is well positioned to respond to any COVID-related challenges and thrive as a leader in the industry for years to come,” he said.