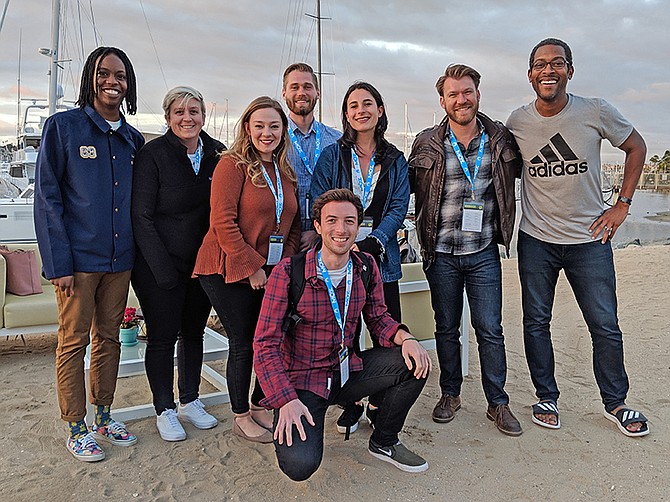 Wil Reynolds commutes between Seer Interactive’s headquarters in Philadelphia and its office in San Diego to meet with his team.

Wil Reynolds didn’t plan on starting a tech company — what he really wanted to do was be a teacher and have an impact on his community. As the founder and vice president of innovation at Seer Interactive he gets to do both.

Initially, Reynolds said he got into the tech sector of search and data analytics for a few reasons: he’s competitive, he likes computers and he could prove his value. He knew he wanted a job where he could be judged based on the cold, hard numbers of his work, above anything else.

“I work in a business where if your numbers are strong enough people don’t really care that you’re Black; they don’t care that you’re a woman,” Reynolds said. “It starts to overcome some of the things that cause people like me, that looked like me, maybe not to get jobs in certain types of roles.”

Before he jumped into the tech industry, Reynolds started his career teaching high school economics and explained how integral this is to his leadership strategy.

“I’m a teacher — like it’s just ingrained in me to want to watch people grow, whereas for a lot of business people it’s ingrained in them to grow revenue, grow profit margin, and that’s the only thing they really think of, and then the people; like ‘yeah, I want to grow a business and then I want to take care of my people secondary,’” Reynolds said of traditional business models. “I think I’ve always flipped that.”

Being a Good Boss

It was the desire to work for a good boss that pushed him to start Seer Interactive in 2002, when Reynolds was in his mid-20s. He was working a job while also searching for a new job for about 18 months with no luck.

After his 9-5, he started volunteering on Wednesdays from 6-9 p.m. at the Children’s Hospital of Philadelphia. He asked his boss if he could work through his lunch break and leave the office an hour early to make it on-time to his volunteer shift. When the answer was no, and it seemed no other jobs were materializing; he knew it was time to make a change.

The Philadelphia-native started Seer as a one-man show and has grown the company to 209 employees stretched across the country between two offices — one in San Diego and the headquarters in Philly.

Fast-forward to today, Reynolds tries to have his actions speak for him as a boss and for there never to be a question that he is taking care of his employees. Whether it’s offering 12-week paid parental leave or recently turning the seventh floor of Seer’s headquarters into a dedicated rec room for families, it all comes back to creating an environment where people can thrive in and outside of work.

For instance, at the beginning of the pandemic, Reynolds cut a $150,000 check to offer his employees and their immediate family grants of up to $1,500 to those who needed help immediately. While the government took time to roll out relief efforts, he wanted to take any pressure off his employees.

It’s no surprise that Reynolds’ commitment to being an understanding boss has led to the company being awarded one of the “Best Places to Work” at a local and national level. The firm also boasts more than 95% revenue growth over a 3-year period from 2016-2019, according to data from Inc. Magazine.

When it came time to choose another city for Seer to expand, Reynolds said the decision was tough. So, he relied on data to search for the best place.

He wanted to move somewhere that the company could have an impact on the community rather than get lost in the shuffle of other tech hubs like Seattle or New York City. He also knew he wanted to be an active chief executive that engaged with his team in person, so he searched for the cities with frequent flights and good Wi-Fi.

He wanted to be able to work from the sky, “meet with people turn around, take the red eye and go right back home so I can see my kids in the morning when they wake up,” Reynolds said.

Seer Interactive ultimately opened its second office in San Diego’s East Village in 2017. While things have changed in the pandemic, Reynolds said he initially spent about a quarter of the year in San Diego “pre-kids” and took it down to about 10-15% of his year on the West Coast “pre-COVID.”

“I feel that San Diego was also a place where we could live out our ethos of being a good company in the community and having the community pay attention to that,” said Reynolds.

At the end of the day, Reynolds strives to lead by example as a company and leader who is committed to the creating a positive change where he sets roots.

“It’s not about money all the time,” Reynolds said. “It’s about companies having an impact in their communities and the people that they share those communities with.”