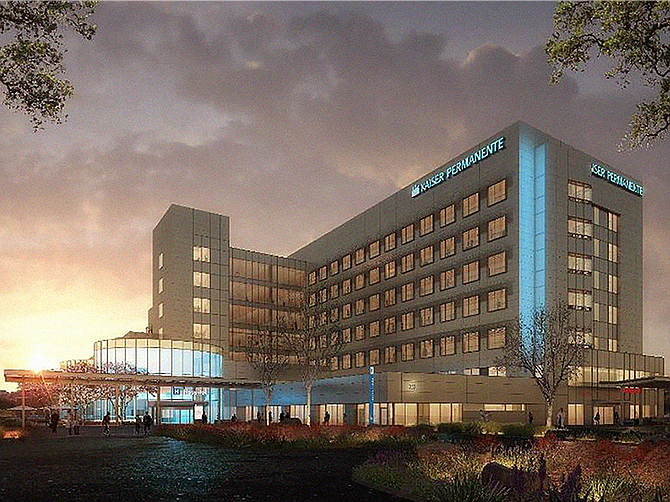 “We’re expecting a substantial amount of recovery and revitalization in 2021, and boy, are we ready for it,” said Matt Sanford, economic development manager in Carlsbad.

Biggest of all is the S403.3 million new hospital Kaiser Permante is building in San Marcos at 400 Craven Road next to its medical office campus. The 206-bed hospital is scheduled to open in mid-2023.

“North County is as desirable as it’s ever been,” said Alex Zikakis, CEO and president of Capstone Advisors, a real estate investment firm based in Carlsbad.

“I’m bullish about all the sectors,” Zikakis said. “While there’s a certain class of retail that has been impacted, I think that retail has held up better than people thought during this period of time. As the vaccines continue to be rolled out, we’re going to see a huge rush into retail consumption at the store.”

That’s particularly true in North County, Zikakis said, which tends to have a larger concentration of higher income residents with disposable income they’ve been sitting on during the pandemic.

“The demographics are awesome,” Zikakis said.

Demand for industrial space is the highest it’s ever been in North County, said Connor Boyle, a vice president of Colliers International in San Diego.

“We finished the third quarter of 2020 at 7.5% vacancy. At the end of December, it had kicked down to 6.4%,” Boyle said. “I would bet by the end of the year, we’re going to be 5% vacancy or sub 5%. The demand is exceptionally high for anything industrial right now.”

Ryan Companies even leased the buildings it’s putting up in Poway to an e-commerce company before the buildings were even finished.

Ryan declined to say who leased the buildings, but several commercial real estate brokers said it was Amazon, which has been scooping up industrial space throughout San Diego County.

Also in Poway, a pair of mixed-use projects along Poway Road promise to give the city the long-awaited walkable downtown with housing priced for a middle-income market.

“We’ve got almost 200 units under construction today. We have another 200 that will start construction at the end of the year,” said Craig Ruiz, economic development administrator. “That will provide some new customer base for the retail along Poway Road. That’s looking good.”

In Escondido, construction is expected to begin this year on the $200 million transformation of the former Palomar Health hospital downtown into Palomar Heights – a mixed-use project that is slated to include 10,000 square-feet of commercial space, 162 for-sale townhomes, 255 rental apartments and 90 apartments meant for people over 55.

That distinction in 2021 goes to Otay Mesa.

The market for industrial space is so fierce that “if people could build more of it, they would and the market would suck it up,” Bruvold said.

His concern for 2021 is whether the hospitality market will make a comeback.

The summer of 2020 was bad and the industry needs a much stronger 2021, Bruvold said.

Oceanside is banking on the scheduled opening of two adjacent beachfront resort hotels downtown to give its economy a major boost in 2021.

San Marcos Economic Development Director Tess Sangster said she expects 2021 to be a strong year across the board.

“For 2021, I do feel there is a sense of hope that people are feeling, that we’re coming out of the darkness,” Sangster said. “It seems like businesses are rebounding and wanting to update their centers. Just this past month, we’ve had multiple calls from property owners wanting to renovate their centers, from neighborhood strip centers to power centers.”

For example, Sangster said San Marcos’ restaurant row that was in its heyday in the late 1990s and early 2000s recently sold for $15.9 million to a Delaware company that hasn’t indicated what it plans to do with the property.

“From a development standpoint for 2021 and what’s on the horizon, every piece of land that’s available, people want to build on it,” Sangster said.

Like in many other cities, a big question for 2021 is what happens to office space.

“We own the Civic Center Plaza and lease to office tenants and that’s definitely slowed down. There’s still some uncertainty about how that’s going to look when things are back to normal and what normal is going to look like,” Sangster said. Aric Starck, vice chairman of capital markets from Cushman & Wakefield in San Diego, said he expects the North County office market to remain stagnant through the first quarter.

“That includes new housing developments as well as commercial and industrial,” Tarrac said. “I see our existing businesses expanding in the coming year. I also see us attracting additional businesses in 2021.”

One early encouraging sign is that the number of permit applications “have increased exponentially,” Tarrac said.

The city also is moving ahead in 2021 with its Grand Avenue Vision plan to improve the city’s main commercial district.

As evidenced by Thermo Scientific’s expansion, Carlsbad is benefitting from a soaring demand for space from life science companies which is likely to continue through 2021, said Sanford, the city’s economic development manager.

“We still see a fairly substantial surge in life science and related fields that are hoping to address this pandemic,” Sanford said.

Carlsbad restaurants and retailers are struggling, but Sanford said that as the COVID vaccine takes hold, the expectation is that they rebound in 2021.