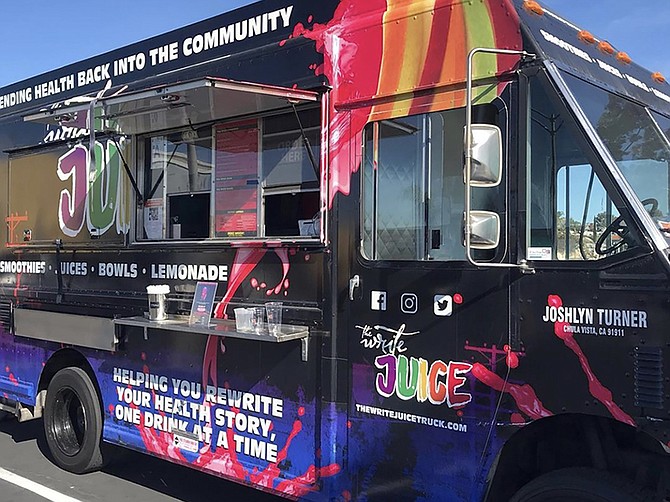 Joshlyn Turner started her food truck business – The Write Juice - in 2009 with a goal of giving people in her part of San Diego healthy alternatives to the liquor stores and tobacco stores she saw all around her.

“I really do want to bring health back into the community,” said Turner, who grew up in Southeast San Diego.

“My parents were very big on fruits and vegetables,” Turner said. “What I noticed was as food trucks became a trend, we did not have a specialty truck like what I had in mind.”

The name of her business is a play on Turner’s avocation as a writer.

“Writing was a hobby for me, something I’ve been able to do since I was younger and I always enjoyed,” she said.

After college, she moved to Atlanta where she did some writing for a theater production company.

Besides the food truck, Turner also has the Write Fit, an online clothing company, and recently started The Write Expressions, a greeting card business.

“I just kept the umbrella of the Write brand,” Turner said. “The vibrant colors of the truck, the name, the branding – all of them play a part in the Write energy.”

In 2020, Turner again turned to her avocation, producing Black Girls Got The Juice coloring book.

As far as she knows, Turner has created a special niche for food trucks.

“There’s nothing like it, at least at this side of the country,” Turner said.

Turner started out making smoothies at home and visiting smoothie restaurants to see what they offered.

“I kind of took that and decided I could make it a healthier option,” Turner said. “I had a few friends who were in the food industry. I talked to them about it. I did a taste test,” Turner said adding that “It was about two or three years before I even opened the truck.”

“I met multiple companies. I bought books about food trucks,” Turner said. “It took a while to play around with.”

Turner said her secret is to keep it simple.

A favorite among her customers is a blue smoothie that gets its color from acai berries.

The COVID-19 pandemic has hurt.

“With food trucks, a lot of our revenue comes from large events,” Turners said. “Our catering gigs aren’t like they used to be but we are open to still do that.”

She said she’s managed to pull through with support from the community and by forming partnerships with Black-owned restaurants.

Although she owns and runs The Write Juice herself, Turner said her family often helps.

Over time, Turner said the pandemic may indirectly help her business as people become more interested in health.

“People are paying more attention to their immune system,” Turner said. “This has also given people an opportunity to try our drinks.”

In addition to running her own businesses, Turner is a mentor and serves on the board of DETOUR, a nonprofit organization that works with young girls.

As a Black woman, Turner said she’s a bit of a rarity in San Diego County’s food truck scene.

“When you think in terms of just like access and having someone to talk to, there wasn’t anybody I could turn to, like a Black-owned food truck,” Turner said. “I do think people are surprised when they find out who owns the truck. I wish there were more Black-owned food trucks, especially in San Diego because it’s so prevalent in other cities where the population of minorities is high. I think San Diego is a little bit behind on that.”